SAN DIEGO – With such spectacular bluefin fishing right on our Southern California doorstep, it’s only natural to debut WON’s California Tuna Jackpot on Aug. 8, 2020. The one-day event for private boaters will be headquartered at the historic San Diego Marlin Club.

“Anglers are ready and itching for a great event during yet another amazing tuna season, with the opportunity to win some big cash and amazing items offered by our sponsors,” said Tournament Director Billy Egan.“ Western Outdoor News sponsors that have already jumped on board and are excited to get the saltwater tournament season going include Yamaha, Berkley, Seaguar, Gamakatsu, Accurate, Engel, Global Fish Mounts, Furuno, SKB, Techron Marine, Kuta, Frogg Toggs, G-FLY Baits, and Maui Jim.”

The top three heaviest tuna will take the honors and the cash. Based on 50 boats, first place will earn $7,000, second $2,000 and third $1,000. Will it take a cow or super cow? Only time will tell, but fish of that caliber are in range as of this announcement.

The all new California Tuna Jackpot will have optional tuna jackpots available for teams interested in boosting their chances at big money payouts. The event also offers teams a yellowtail option.

The long-running Make-A-Wish® San Diego Tuna Challenge is on hiatus for 2020, and while WON cannot hope to nor desires to replace such a legendary event, our staff is happy to announce that 5% of all the California Tuna Jackpot optionals will be designated for Make-A-Wish San Diego to help this worthy organization fund wishes for critically ill children.

Entry is $400 per 2-4 person team. Two additional team members can be added at $100 each. No more than 6 people may be on a tournament boat during competition hours, and all must be on the registered team.

Sign-up is available now at WONews.com. Mandatory check-in will take place Friday, Aug. 7 at multiple locations. Hogan’s Tackle in Dana Point and Sav-On Tackle in Sante Fe Springs are good options for those travelling from up north, as is Ken’s Custom Reel in Oceanside. In San Diego, competitors can check-in at Anglers Choice in Point Loma.

Sign up now! Teams that register before July 17 will be eligible to win the EF1000iS Yamaha generator early bird prize.

“Don’t miss out on this inaugural event during yet another amazing West Coast Tuna season,” added Egan. “WON looks forward to growing this event for years to come!”

For more information contact Tournament Director Billy Egan at (949) 366-0248 or bille@wonews.com, or check out the California Tuna Jackpot Facebook page. 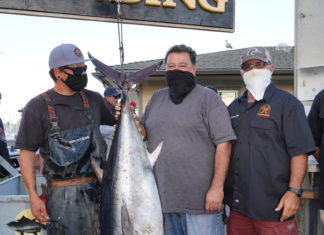 Tips and tricks for fall corbina 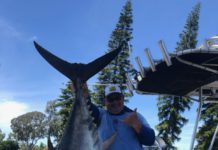 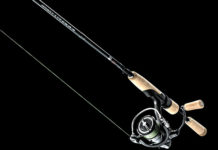 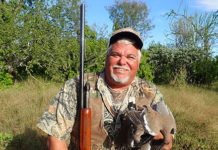