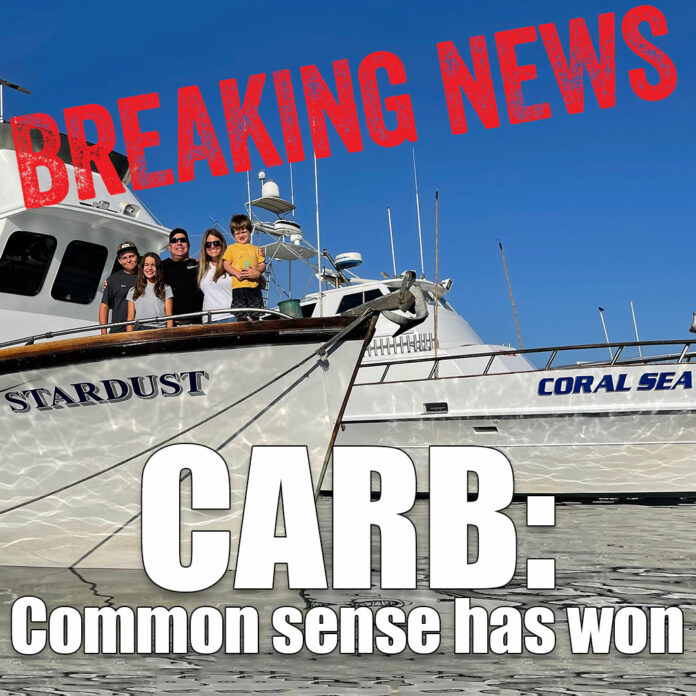 Since summer of 2021, over 23,000 Californians and 60 local, state and national business organizations made the case to the California Air Resources Board (CARB) that their proposed harbor craft regulations were economically and structurally infeasible, and there were a host of unresolved safety concerns that needed to be addressed to protect passengers and crew.

As originally drafted, commercial passenger fishing vessels would have been removed from service starting as soon as next year.

Because of the support from WON readers and the entire West Coast sportfishing community, CARB listened and is responding to the pleas of boat owners who wish to remain in business and maintain the most affordable opportunity for ocean access.

On March 24, CARB is planning to approve an alternative, amended plan that reflects a belief that lower engine emissions can be achieved without significant economic harm to small business owners and the communities that depend on them for visitor spending and jobs.

The new plan proposes a compliance schedule that is more realistically achievable — requiring boats to re-power to lower emission engines as the technology becomes available and it is economically feasible and safe.

The new plan recognizes the significant amount of upgrades that have already been done and proposes a compliance schedule that is more achievable. This is a major, and positive, shift in approach as the State marches down the path of achieving zero-emission engine standards by 2045.

We will have more on this story in the next issue of Western Outdoor News, on sale April 1.