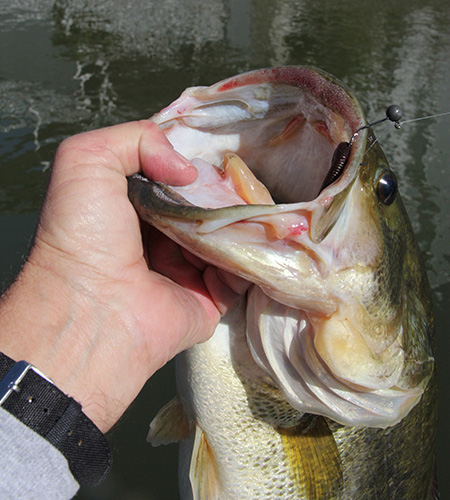 I’m like you in that I’m pretty sure when it comes to fishing methods and baits, I like “new” and “hot” stuff. But these are two — way different — concepts. Hot is what’s working now, and what is catching on, and what people want.

But new? There is very little “new” stuff out there. New wrinkles and applications do exist, but tell me, what is it you’re using that’s actually new in worm fishing? As Bill Siemantel has said, “There are an unlimited number of tools (baits), but there are really only a dozen or so methods.”

Take the worm, or jig and worm, for example. You can shake it, drag it, swim it, hop it, dead-stick it — and then you start running out of presentations. You can change hook positions, weights (including eliminating them) or try other positioning, such as with the weight above or below the hook. But in the end, you’re probably still shaking, dragging, swimming, hopping or doing nothing with your bait.

Where “new” really comes into play (and which sometimes turns into “hot”) is when the bass we target have not been over-exposed to a certain retrieve or presentation — at least generally. It’s new to the fish.

I’m going to leave out Texas rigging, per se (with sliding or pegged sinkers) and drop-shotting for the purposes of this article. Yes, I understand, if you peg the sinker on the one, you have created a jig/worm. And if you put your drop-shot hook an inch above your sinker, it likewise functions similarly to a jig and worm.

However, there are several less widely used methods (meaning those with pocket area popularity) worth talking about. I have pictured some components here, including a Neko weight (not a jig, but acting as one), a Ned head or mushroom jig, a wacky jig, dart head, pea or round head and related Westy’s Worm, as well as a shaky head.

Each of these “heads” creates a nose down, bottom contact type of configuration. However, the wacky jig presents the worm transversely, while the Neko rig, similarly, moves the hook closer to the mid- point of the worm’s length. But in the end, these, like the more traditional jig/worm combos, still get fished the same ways: shake, drag, swim, hop or dead-stick.

So, pick one and don’t worry about it? (They almost all fish nose down). Of course not! These jig/worm rigs have individual appeal and advantages, not the least of which is angler confidence. Let me toss out a few ideas, although you may have already settled on certain rigs for certain conditions. If you’ve got something that’s already working, don’t let me talk you out of it. These are just some considerations.

THE NEKO I’ll address first. No doubt, the worm movement with the nail weight is unique, whether in a full-sized cigar, thin Senko or shaky head worm. The preference is that it be fished on hard bottom, mostly because even with a weedguard on a drop-shot hook, it catches weeds.

Interestingly, I first learned of the unnamed method at a sport show, where Woo Daves spoke about a “new” rigging method. Even before the use of short shank hooks and O rings, he described a wacky version with no ring, hooked through the body, nose down, with a long shank hook.

THE NED is up next. It has come on strong out West. But thousands of Minnesota anglers would argue it sure ain’t new. The biggest difference today is the size and the weight of the so-called mushroom jig head. When Hall-of-famer Ned Khede first drew attention to the rig, which his name now adorns, he was using a Gopher brand head weighing as little as 1⁄32-ounce and half a Senko.

But you can guess, few trolling motor/bass blasting guys were going to fish slow enough to wait on that tiny head to hit bottom. That’s why the “switch” to bigger heads took effect (and incidentally, Gopher jigs went out of business).

But one thing is for sure, that round-faced jig head drags rock well, and even stands up at times with all kinds of cigar-type baits. (But watch, we will eventually see every other soft plastic shape in use).

SHAKY HEAD, the all-purpose jig/worm rig, is the finesse rig for the other part of the country. Sure, we use them, but it’s hardly a favorite in the West. But when you have trees, wood and lots of docks, as they do throughout the Midwest and Southeast, this is a rig that lets you fish with the hook point protected, imbedded back into the worm.

WACKY TIME. Wacky rigging, in the 1980s, was a Texas favorite with a long shank, Sproat hook and 6-inch Crème Scroundrel. The technique likely existed much earlier but didn’t have a name. But putting the worm on “cross wise” or wacky-style on a jig head, however, allowed it to be fished much faster.

Jackall had the first heads (but small hooks without weed guards) but was forced by the bubba states to produce heads with bigger hooks that then necessitated wire weed guards. When combined with their Flick Shake worm, Jackall got a jump on the market. (There are many versions now).

This too is a rock favorite, though when patiently fished, it maneuvers through wood or brush. Curiously, on smoother, harder bottoms, wacky fishes just as well without the wire guard. That’s because the draped worm acts as two arms, holding the hook point up and safe from many snags.

DART OR PEAHEAD? Arguably, these are the same, yet with subtle differences. Both have a collar so a worm can be snugged up to the head, worm trailing, hook often exposed. But how might you choose one over the other, assuming the same weight heads and same depth are in play?

First, the round head falls faster. Although measurably the same, the weight is concentrated in the peahead and once it starts to fall, it goes straight down. If a few seconds per cast means anything to you, round is better.

Of course, those will argue, the slower fall, even circling drop of the pointed dart head (sometimes called darter head) is the secret. I have no evidence. If I have got a bite on the drop more than twice in 30 years, some of my old partners will have to testify. The dart (outside of swimming, glider-style fishing) is a champ on the bottom.

When you shake a dart, every time the line goes slack, the bait lays on its side. (The round head can’t lie flat.) When the dart lays on its side, the hook point may tick a piece of cover or hard spot on a silt or sandstone bottom. Year in and year out, when I feel the hook point scratch something hard, I pause, and the next shake is often met with a bite. That’s the secret.

WESTY’S CONFIDENCE BAIT. If you didn’t like one exposed hook, then you’d hate two of them. But for decades, Arizona bass fishermen, thanks to the iconic Danny Westfall and his Westy’s Worm, had one of the best desert lake baits in production.

Effective hopping or dragging, especially on rock with sparse bottom scrub, Westfall never changed even when he fished exposed mesquite or ironwood. He had such confidence in his creation, he could sneak it through the worst stuff.

But the downside was they were labor-intensive to make, affecting the cost to anglers and there eventually was a swing to other rigs, putting them out of favor. Featuring a stinger hook, painted head and two knots for every bait, you don’t see them much any more — unless, you make your own.