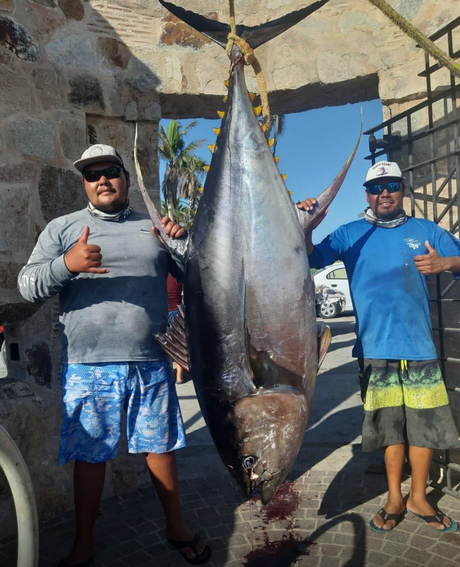 According to Chuck Buhagiar, general manager of Western Outdoor News, the 23rd Annual Los Cabos Tuna Jackpot has been set for November 3-6 of this year.

“We’re really excited to be hosting this spectacular event again. After 22 years, it’s very special to us as well as the participants and of course, the city and people of Cabo San Lucas,” said Buhagiar. “Last year, we had 149 international teams and over 600 anglers come down to participate during the 2 days of fishing. As the largest tuna tournament in the world, we gave away over $1 million in prize money and we’re looking forward to even bigger fish and bigger jackpots this year.”

This year’s new tournament director, Jonathan Roldan, explained.
“Of course Covid put a roadblock stop sign on the whole world last year and until mid-summer, Cabo San Lucas was pretty much closed down tight. No hotels, no charters and no restaurants. No gatherings. No charters. They weren’t even selling beer during that time. It’s pretty hard to have a tournament in that kind of environment, but pretty much the whole world was locked down.”

According to Roldan, “Pat McDonell has been at the helm of the tournament since its inception 23 years ago and has done a tremendous job growing it into the world-wide event it is today. He works like crazy making sure the tournament lives up to its motto of “Fish Hard, Party Harder.”

“However, in 2020, he was at wit’s end trying to plan the tournament and went through the ringer. First, there was no certainty there would even be a tournament. Then, when Cabo started opening up in June/ July, everything hinged on what was happening with Covid. Local authorities initially were skeptical that an event of this magnitude could be safely conducted.”

McDonell and the rest of the WON Tournament staff rode a roller coaster of planning that was unprecedented.

The tournament was on. Then it was off. Then, it was maybe. Then it was no.
It’s not like an event of this nature comes together overnight. Hotels, restaurants and charters are involved. There are dinners, awards, meetings, food, musicians and more that need to be planned. Logistically, locations for a massive scale and platform stages need to be secured and built. Permits and insurance need to obtained. There’s also a tremendous up-front cost to throw such a massive party that involved two days of fishing and almost a week of festivities.

Buhagiar added, “We had to basically plan for all the contingencies. Imagine planning a wedding party that’s going to last all week for about 1,000 of your best friends. That’s what this is like every year… about 600 anglers plus friends and family. But 2020 forced us to plan a “normal” event with all the bells and whistles. And it also required we plan a “scaled-down” version subject to whatever Covid protocols were being implemented by the health and governmental authorities.”

“Of the 22 previous tournaments, I’ve worked at least 10 of them,” said Roldan. It’s a massive undertaking to make it happen and Pat McDonell was getting batted back-and-forth in 2020 trying to get the tournament underway. Honestly, there was some doubt that even with all his work, that there would be a tournament at all in 2020.”
Would the tournament be shelved like so many other things last year?
In late August, the tournament got the go-ahead. With stipulations…

There could be no large gatherings. So, that meant no big captains meetings and parties. No big gatherings along the Cabo Malecon to watch fish being weighed. No live music parties. No big awards banquet dinner. There were even restrictions on how many people could be on certain-sized boats.

Western Outdoor News decided to go all-in and full-speed ahead.

At that point there were only about 20 teams registered with the question being would anyone still be interested in the tournament without all the usual social gatherings and the other Covid restrictions. With only about 2 months before the November tournament there was a lot of anxiety over whether they could pull this off.

“It was awesome to watch it come together and hearing the phones ring and registrations start flowing in. We got about 50 new registrations that first week!” an excited Buhagier said. “Once we got the green light, everyone jumped on board and we were going to make the best of it. It was exciting to get the go-ahead after so after almost a year of anxiety.”

McDonell added, “Everything had to be controlled to keep in line with the Covid restrictions. Registration was done over 2 days instead of 1 day to mitigate the crowds. No booths were allowed. The traditional Captains’ Meeting was done virtually and via social media. We couldn’t have the tournament out on the Cabo Malecon in-between Hotel Tesoro and Solomon’s Landing Restaurant like normal. Therefore, the scales were moved to the other side of the marina in a spot where boats could come in and out, drop off fish at the scales, take some photos… but without the crowds.”

By the time the tournament kicked off, 149 international teams with over 600 enthusiastic anglers had signed up.

Even without all the usual social events, everyone fished hard and still had fun.
“Instead of having all the big banquets, WON handed out meal vouchers so folks could party at certain famous Cabo restaurants of their choice like Captain Tony’s, Solomon’s Landing and the Baja Cantina on the Malecon. It’s Cabo!” said Roldan. It’s hard NOT to find fun in Cabo!”

So, with that in mind, WON is getting ready to host the Cabo Tuna Jackpot for the 23rd year and looking forward to having you down for this historic and fun event. So put it on your calendar… Nov. 3-6.

With 2 days of fishing on Nov. 4 and 5, there are numerous ways to get in the money for large tuna in several categories plus a wahoo and dorado category as well each day. Experience isn’t as important as a great attitude to come have some fun.

You can get all the details as well as entry forms at cabotunajackpot.catchstat.com