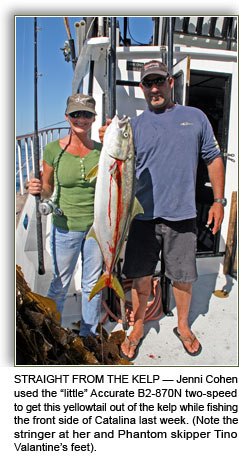 It seems like trends are always changing when it comes to the tackle that Southern Californian anglers gear up with.

As far as reels go, it’s safe to say that there are two major trends. One is going with small two-speeds for not just long range trips, but also local fishing. The other is companies developing and selling reels that are designed for one or two purposes, like, say, a jigging reel or something like that.

Accurate is one of the companies at the forefront of reel designing and innovation, and the Corona-based company has been pumping out more and more two-speeds over the last couple of years. Now pretty much all their Boss reels come in two-speeds.

The smallest of the Boss two-speeds on the market (at the time being, anyway) is the 870 narrow, which is called the B2-870N. It, like many new reels on the market, was designed with a specific purpose/application in mind.

“The 870 narrow was originally developed as a jigging reel for vertical jigging Japanese style knife jigs,” says Accurate’s Vice President of Sales and Marketing Ben Secrest, “but it’s a great reel for local fishing for tuna, yellowtail and marlin. I was down at Rancho Leonero the other week and was catching stripers on the 870 narrow … you can really do a lot with it — it’s just a killer reel for fishing 50- or 65-pound braid (as in braided line or Spectra) on.”

The 870 narrow falls into the category of being one of those reels that was designed for a specific purpose but ended up being a multi-tasker.

Sure, it can be used for deep jigging thanks to its narrow design and 6:1 high gears, but its perfect application for local and long range angling doesn’t revolve around just jigging.

Loaded up with 65-pound braid to a short piece of fluorocarbon the reel is an absolute killer (it holds a little less than 300 yards of 65-pound braid). It can be used as your heavy outfit for fishing big baits and squid on for yellows and seabass here at the local islands, while also being a winch of a reel to fish albacore with when they really want to die. If you hook a bluefin or something your bases are covered as well. It’s small and light, so you can fish it all day and uncork longer casts than you can with, say, a 4/0 loaded with 50-pound.

I’ve been fishing mine at Catalina a little bit when we’re really backed in tight to the kelp. It’s usually the heaviest rig I bring, that little 870 Narrow loaded with green 65-pound Jerry Brown Spectra to five feet of 50-pound Seaguar Fluoro Premier. I fish it with a good 15 pounds of drag. If the hook pulls, it pulls, but either way the heat really gets put on any yellows or seabass (or bat rays) that get hooked on the rig. Low gear isn’t really always necessary for fishing “smaller game” here locally. With that said, the low gear is like a winch. It works out great when a fish gets you in the kelp and you literally have to winch in the whole stringer. (The picture of Jenni Cohen with her Catalina yellow caught on the reel shows just a piece of the fifty-plus-pound kelp stringer the 870 Narrow brought up with the yellow; hence the term “winch”).

So far as rods that match up with the 870 Narrow there are a bunch of candidates. One of them is one of Accurate’s new braid rods. Yeah, that’s right; Accurate now offers a complete line-up of rods that were designed for fishing specifically with braided lines. To the best of my knowledge they are the first company to offer rods that were built around fishing strictly with braid.

But then again, what else would you expect from a company that engineers their reels around fishing with the unforgiving nature of braided lines.

On a side note, I’ll be on Let’s Talk HookUp next Saturday morning so long as I can get out of bed at 5:30 a.m. for something that doesn’t involve fishing. If you have a question or comment tune into 1090 AM and call in. Otherwise, I can always be reached at Brandon@wonews.com for column ideas and any questions or comments.