“I’ve got an old tackle box that’s been sitting in my garage for 20 years. We’re spring cleaning and the wife wanted to throw it away. Would you want it?”

Those were the exact words of my neighbor looking to placate an impatient wife.

My expectations were low. I’ve acquired a lot of “old” tackle boxes over the years and most are for the most part unremarkable. They mostly consist of a bunch of sordid plastic worms and grubs, half melting over hook boxes and rusty-hooked lures. Packages of leadered hooks and dried and hard jars of salmon eggs and cheese bait litter the bottom of the box.  A broken plastic Zebco scale, a red fish hook remover and a chalky stringer round out the usual contents. You might manage to salvage a few hooks, jigs or plastic worms, but any decent lures are long gone. But this tackle box happened to be a little different.

The box itself was ordinary, a hammered aluminum with segmented trays that folded out upon opening. A mid-50s design of American construction, that had survived the rigors of use and time with flying colors, functioning perfectly with just a few nicks and dents to show for wear and tear. The clue as to the age of the tackle box was lying in the top tray: a box of wood matches manufactured by the Ohio Blue Tip Company. The match box was dated 1955. On the box was an image of a football player wearing a leather helmet with no facemask.

Most tackle boxes that I’ve acquired in the past generally have some old stuff mixed with a bunch of newer stuff dating through the ‘70s and ‘80s. This box was not that. The story goes that my neighbor’s uncle fished with the box in the ‘50s and ‘60s. Upon his death, the box was given to my neighbor’s dad. Here it stayed for 20 years. When my neighbor’s dad died, the box went to him, where it sat in his garage for another 20 years. What is different here is that the tackle box had not been used in at least over 40 years. The early date and use of the tackle box can be verified by the lack of any plastic worms or other plastic baits, which were first developed in the early ‘70s. Essentially, when I opened this tackle box, it was like opening a time machine. Nothing had changed in this box since the late ‘60s, maybe early ‘70s.

To open a tackle box frozen in time is a unique opportunity. The tactics and techniques are manifested in the contents of the box. The hot lures of the day, mixed with the sucker baits meant to catch anglers not fish. Many are longtime favorites that have proven themselves over the ages. Others are flash-in-the-pan, trendy baits;a here today, gone tomorrow. Most of the plugs and spoons were manufactured in the United States, something that has also changed drastically in recent years. Most of the leadered hook packages and boxed hooks were manufactured in post-WWII Japan. In later years, Korea made terminal tackle became dominant. There were also a few boxes of Mustad Hooks, manufactured in Norway but packaged by Glen L. Evans Inc. in Caldwell, Idaho. Another tell was a metal box with a sliding lid holding Brinkton #2 Shear Pins manufactured in Minneapolis, Minnesota. The metal, sliding lid boxes were common in the 1950s and ‘60s. The tackle box owner fished in a boat with a small outboard judging by the size of the shear pins.

Hard baits were the most common baits in the trays. These lures represented the heyday of the metal bill. There were 25m Mirrolures, Heddon Vamp Spooks, Creek Chub Minnows and Heddon River Runts. There was an early precursor to today’s crankbait too: the Heddon Deep 6, a deep-diving, metal-billed plug. The Arbogast Hawaiian was a spoon popular in the ‘40s and named to take advantage of the post-war popularity of Hawaiian culture. There was an old lure, made in France, the Vivif. It is one of the earliest fob tail-style swimbaits. It was originally made of a rubber that dried shrunk and cracked over the years.

There were also some baits that I have never seen before. The Whing Ding is a metal billed plug that looks like a Flatfish. A fat, copper spoon with spinning red glass eyes is stamped Red Eye “Wiggler.” It was manufactured by the HCFSchnieder Corp. in Rochester, New York. The Heddon Stingaree is a rare, odd, hinged bait that looks like nothing else. My favorite was a lure manufactured by the Worth Co. in Stevens Point, Wisconsin: the Flutter Fin. It is a round topwater bait that looks like an old Soviet-era Sputnik satellite.

The box also contained two topwater baits that fish as well today as they did 50 years ago: the Arbogast Hula Popper and Jitterbug. I still use these old lure designs on smallmouth bass, which can’t resist them, by the way. Other topwater lures included the Heddon Dying Flutter, a double prop bait, the River Runt Spook Floater, a single prop bait and a unique wooden plug made by Shakespeare called the Genuine Swimming Mouse. There was also an assortment of small trout and panfish-size hard baits like Heddon Tiny Tads, Tiny Runts and Sonics.

Judging from the lures and hooks, the owner of this tackle box fished for bass, panfish and trout. He fished from a small boat. The lure selection extends from the 1940s to the early 1970s. Japanese-made hooks and hook packaging and the vintage shear pin tin reinforces the dateline. The condition of the lures is excellent. Since there were no plastic worms on the market at this time, none of the lures have paint damage due to a reaction with the old plastics. The box had been kept dry so there was little rust or corrosion.

With the popularity of collecting vintage lures rising, finding a tackle box with so many old plugs is rare. The value of most of these lures is nominal. Some with the original boxes or that are particularly rare can have a greater value. But the real value is in the history of it all. The imagining of a time in the golden age of sportfishing, a time when catch rates were high and the resources were seemingly boundless. A time when American manufacturing was in its heyday. Next time you see an old tackle box at a yard sale or one is offered to you, just make sure you don’t say no whatever you do.

There is a small chance that you may be opening a window to the past, a fisherman’s time capsule. And that in itself makes it all worthwhile. 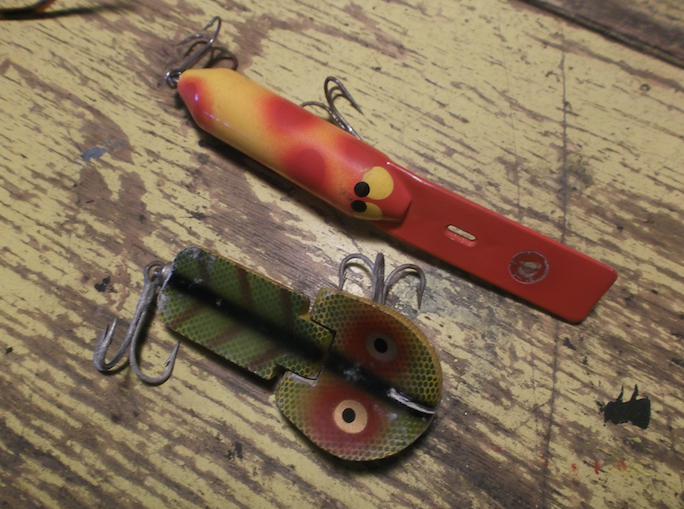