COLORADO RIVER (BELOW DAVIS DAM) – According to Rusty Braun at Rusty Riviera Marina,
striped bass to just under 10 pounds are being caught in the area. A 9.84 was landed on a swimbait near Rotary Park. Trout are still being caught including some limits for anglers using jigs or floating baits. The casino area and Community Park have been decent for both trout and stripers.

LAKE HAVASU – Topwater is still working decently for largemouth — particularly Whopper Ploppers and frogs — along with cranks, jerkbaits, chatterbaits, swimbaits, A-rigs and underspins all getting bit fairly well along with your standard soft plastic arsenal on a slow presentation. Stripers have been picking up some, particularly for anglers on the troll. Shore anglers are also scoring striper bites on cut baits around Site 6 and the Parker Dam. Redear are way down deep with few anglers targeting them — wait ‘til springtime for the big shellcrackers.

LAKE MEAD – The boat launching situation with the historically low water level here still isn’t getting much better. Most of the lake’s ramps are still in dire straights. That said, for those who are able to get out, the striped bass fishing is still pretty good in the Sand Island Channel area with small swimbaits and occasional topwater first thing in the mornings, and the Echo Bay area remains a best bet for bass with some topwater still in play early and late. Crappie action has slowed with rising summer temperatures. Anglers targeting catfish with shrimp and cut baits are still connecting decently in the back of the Wash.

LAKE MOHAVE – Striped bass anglers are looking for boils as the water level continues to rise, which usually turns them on. Most sightings of striper vs shad violence is occurring between Princess Cove and the Dam, and if the boils aren’t obvious, looking for birds has been the next best thing. Fishing for smallmouth and largemouth bass remains slow.

WILLOW BEACH – Trout are being stocked at the marina every week, and the bite has been consistent on spinners, nightcrawlers and floating baits. Striped bass fishing is slow to fair for boaters, without much in terms of bigger stripers reported this time around. Some smaller models are showing up on anchovies close to the Marina. 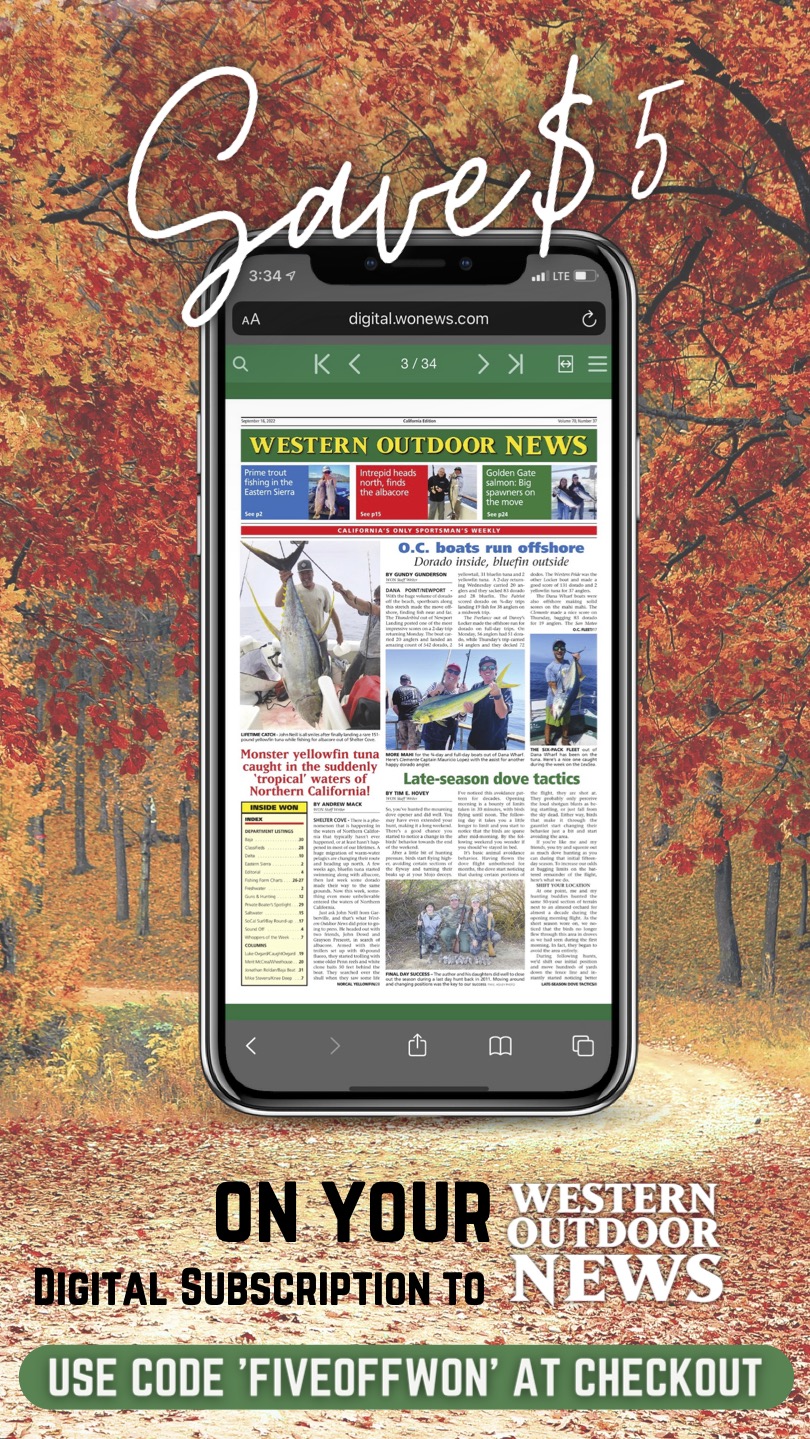 BY BLAKE WARREN SAN CLEMENTE – Coming on the heels of an excellent tournament season in 2022 which saw the new Laughlin Open at Lake...

Mild northeast/Santa Ana offshore wind conditions provide some of the best fishing opportunities of the year. Now that we’re past the first storm fronts...

PORTLAND, Ore. — U.S. regulators have approved a plan to demolish four dams on a California river and open up hundreds of miles of...

Bass fishing – How to stay dialed in this Fall

BY ROB MAGARGAL Yes, it is Southern California, the land of sunshine year-round. But we still have a fall bass fishing pattern just like...