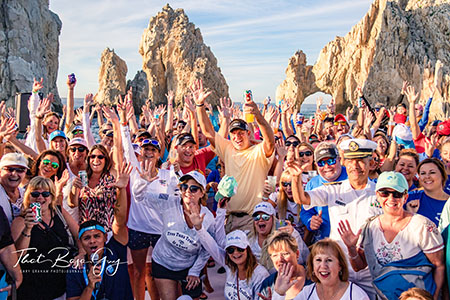 Often copied, but never duplicated, Western Outdoor News/Los Cabos Tuna Jackpot Tournament celebrates its 21st-year kick off Nov. 6 with the “Fish Hard, Party Harder” motto that has highlighted the spirit of the event from the very beginning still very much present.

All anglers on the team must be present to fill out waivers. There the teams pick up their angler packets — hats, bags, and shirts along with various sponsor gifts — and they can buy extra dinner tickets or Costa Miracle Charity Charter Start Boat tickets.

Registration becomes a party beginning as the teams arrive and mix with the staff, spectators and sponsors. Over time, the team garb has evolved from ordinary t-shirts, shorts and flipflops to elaborate matching outfits, and in some cases, props as well.

Throughout the afternoon, the interaction among the team members begins as most attempt to gain more information than they give out. Before the first Welcome Party of the event gets rolling a bit farther down the Malecon around 6:30 p.m. at the Marlin Sculpture area between Captain Tony’s and Solomon’s Landing where there will be the Captains Meeting with gifts and raffles, tequila shots, video from last year’s event, plus, before the final optional, totals are announced, followed by live music.

Thurs. morningat 7, it’s all business for teams as they load onto their respective boats and head for the shotgun (flare) start at “Land’s End.” They idle out, with last-minute details on their minds set aside as adjustments are made to their “Show Me Your Costas” entry – limited only by their imagination.

The Costa-sponsored spectator boat, “Wild Tours’ Cabo Escape,” heads out for another party with huge Costa signs fluttering. Guests are offered mimosas, coffee, orange juice, champagne, and breakfast burritos, as they watch team boats cruise by slowly, showing the Team Number and their “Show Me Your Costas” display.

When the red-start flare streaks across the sky, the huge fleet of boats from 22- to 80-feet roar off toward their secret spots, either on the Pacific side or north into the Sea of Cortez. With dance music blaring, the Costa Party begins in earnest, with line dancing on the top deck. Costa’s VP, Dave Bulthuis, and Chuck Buhagiar, Director of Sales & Marketing at Western Outdoor News, raffle off Costa swag to the delight of the crowd. As “Cabo Escape” nestles closer and closer to the rocky point for the ultimate “selfie.” Bulthuis will thank everyone for attending and supporting the “Smiles Charity” with their $30 donation.

Thurs. afternoon,Gray Taxidermy Weigh-in 3 – 6 p.m. (or until all eligible fish are weighed on the Malecon in front of the Tesoro Hotel). This is the place to be after lines-out at 4 p.m. when teams begin to arrive; the crowd will swell as locals, tourists, and team members, along with friends and family, gather to watch the raucous affair that isn’t over until the final eligible fish has been weighed.

On Friday morningat 7-a.m., the schedule is repeated for the teams as they load up on their respective boats and head out forthe shotgun (flare) start at “Land’s End,”and teams head out for the final chance to catch the fish that will guarantee their moment of fame and glory along with a big check to underscore their success.

On Nov. 9: It’s a kick-back play day for the teams and their families and friends to get ready for the always entertaining Cabo Tuna Jackpot Awards Dinner and final party on cruise line pier beneath a starry Los Cabos sky. The bar opens at 5:30 p.m.

The live band starts at 6 p.m.; dinner is ready at 6:30; Smiles International Charity’s Silent auction. All sponsors’ tackle drawings begin at 6:30, and the awards ceremony takes place from 7 to 9 p.m.

There is still time to see what all the fuss is about. Don’t miss your opportunity to FISH HARD AND PARTY HARDER at the largest tournament in Mexico and the biggest tuna jackpot event in the world. Registration is still open until October 31, 2019.

For questions about the event, your signup contact is tourney administrator lori@wonews.com.