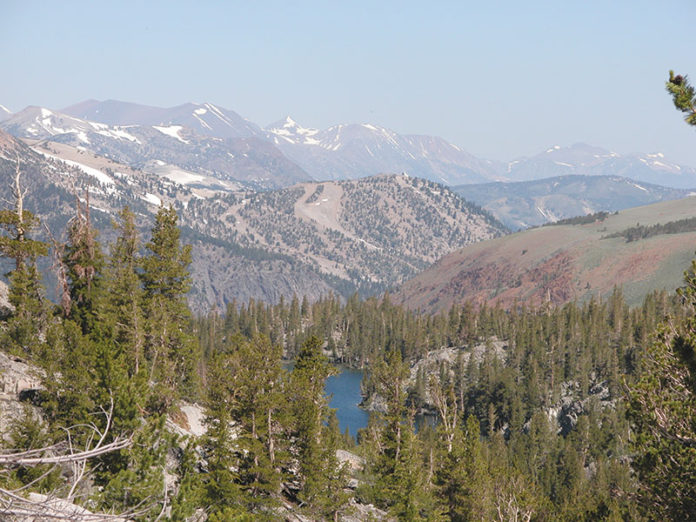 ROCK CREEK LAKE – Everyone’s heard the line, “he looked like he’d seen a ghost.” When I showed my brother an image of John Muir, I actually saw that look on his face in real life. We’d been joking about what we had just experienced on the way back to our condo base camp in Mammoth, but at that moment, it became real.

Hours earlier, my standard Sierra party consisting of my dad, step mom and brother parked at the Hilton Lakes trail head at Rock Creek Lake. We had been beating our current day-hike-to-trout trails to death and were looking for something new. Hilton Lakes trail is a little longer than any hikes in our regular day-hike playbook at 6 miles (depending on which lake you stop at) one way, the idea of multiple lakes to choose from and a shot at wild, high-elevation rainbow trout made it worth a look.

While we always start together, different hiking cadences almost always lead to different arrival times with my brother leading the charge and myself proudly bringing up the rear. He’ll relay what he’s running across, which way to turn and when he arrives back to us via walkie-talkies, then we all come together at the top.

As anyone who has hiked a Sierra trail knows, the mileage doesn’t really give an idea of how tough the hike will be. Elevation, switchbacks, elevation gain from bottom to top (which I now know is 2,100 feet), creek crossings and so on all come into play, so, a 5-mile hike could be much easier than a 2-mile hike. This one had a little of everything, so when I was 4 miles up as the crow flies, it felt like ten.

When bro made the call that he had arrived, I figured I was about 45 minutes behind him. At that point, the switchbacks had come to an end and I found myself at a mini-summit of sorts and exhausted, but I was rather stoked to see the trail cross a wide open clearing over flat land, and my legs were going to get a bit of a break from the steep incline.

Gassed, I went into one-foot-in-front-of-the-other mode and was pretty much staring down at the trail three feet ahead of my boots as I marched across the clearing. I was only a couple minutes into it when I picked up some movement in my peripheral vision.

About 50 yards to my left and perpendicular to the trail I was on, I saw a guy hiking at a pretty good clip going the opposite direction, or, down the hill. I couldn’t get a real good look at him, but I could tell he was tall and slender, was wearing a brimmed hat and what looked like some kind of overcoat. He carried a single walking stick (more “suitable branch,” less “REI”) and had a bushy beard. Running across “mountain men” in the Sierra backcountry is nothing new, so I wrote him off as that. I also thought it might be the “Sierra Phantom,” who is an actual guy (that would be a fun Google rathole to fall down if you haven’t heard of him) many 395 regulars may have run into in front of Schat’s or other spots around Bishop, but he looked too tall to be him. I did find it odd that this guy was hiking off the trail, and I wondered why he was making it harder on himself. He also didn’t appear to have a backpack or anything other than that walking stick.

The clearing came to an end, and I was not happy to see the trail reach the bottom of some very steep switchbacks. I radioed my brother who said he was at one of the Hilton Lakes at the top of those switchbacks, and he was already connecting to rainbows. Confirmation of biting trout and the fact I was almost there gave me a second wind and I shot up to the lake.

It’s good to arrive and know fish are biting, but it sucks to be the last one to the party and risk only catching the tail end of potentially limited action. Everyone had at least half-a-dozen, and I think my brother had already hit double digits when I made my first cast and got bit on a tiny Kastmaster.

Wild rainbows are a different animal than the stockers you catch down closer to civilization. Flawless, full finned and sporting zillions of tightly-packed black dots from top to bottom over a well-defined red lateral line. They were all between 10 and 14 inches in length, and they are absolute athletes. You don’t get even to the lower end of that size range after hatching in the wild, evading predation 24/7 competing for a limited food supply without being mobile, hostile and agile. Also, at that altitude with such a short window in which to really pack in protein (ice out), Mother Nature herself prompts them to aggressively attack whatever looks edible.

Thankfully, my Kastmaster (and whatever else we threw) fits that bill, and every one of these fish would make multiple leaps up to three feet clear of the water before being brought within range of a quick release. I eventually went to a fly-and-bubble so I’d be hitting them with a tiny, barbless hook. Each of them reacted as if they were not used to anything they bit biting back.

We came together at the lake’s outlet and made the call to head back down after hours of teeing off on those incredible fish. When I arrived, my water bottle was almost empty, so I stuffed it full of snow so it would melt and I’d have water for the way back. I still hadn’t mentioned the hiker I saw until we were back in the truck and heading back to Mammoth.

After describing him, my brother said, “Oh yea. I actually talked to that guy. He had the best map of the area I’ve seen, and it looked like it was hand drawn on a piece of cloth he pulled out of his pocket.

“He’s the one that told me the first lake was up that steep set of switchbacks.”

Now, we are map nerds, and we own just about every type of Eastern Sierra map available, so for him to say this hand-drawn one was the “best he’d ever seen” was saying something.

“You know what else I noticed? He didn’t have a backpack or a water bottle,” he added.

I told him I thought the same thing, but I was never close enough to really see what the guy did or didn’t have on him. Keeping in mind how much I underestimated how much water I’d need that day and that I actually had to drink snowmelt for the hike down, this lack of water thing kept coming up as we continued to talk about the him in the half-joking way any group of tired hikers would talk about what went down during a long day outside.

“Maybe it was John Muir’s ghost,” I said with a chuckle. “I read that he would just take off into the mountains on these long walks, and he’d only throw some bread in his pocket when he did.”

My brother asked who John Muir was, and I gave him a first-line-on-Wikipedia description followed by, “You know how a lot of the signs with the maps at the trail heads have a cool quote on them? Like, ‘The mountains are calling, and I must go.’ Most of those quotes are from Muir.”

That was kind of the end of the driving-home portion of the Muir conversation as we moved on to the fishing highlight reel. Back in the condo, I threw my keys and wallet where keys and wallets tend to get thrown in vacation rentals, and there was also a bunch of change there including those state-specific quarters that had recently hit the streets.

I found a California one, which has an image of the bearded Muir standing with a walking stick, wearing a brimmed hat and staring down Yosemite’s Half Dome. I went up to the loft and showed it to my brother, and said, “This is John Muir.”

His mouth dropped and he let out a breath without saying anything, he just stared at it. I then realized I somehow had on hand (must have been in a book or something, because this was well before the time you’d pull a little computer out of your pocket and Google it up) that photo of Muir and Teddy Roosevelt in Yosemite. When I showed him that, he looked like he was about to get sick to his stomach, or, like he’d actually seen a ghost.

Later at dinner, he started asking questions mainly curious as to why he was so cool about showing him around on the hand-drawn map and, to a lesser extent, why he didn’t haunt us or something?

“Well, maybe he knew we respect the place,” I said. “That we don’t leave trash or anything like that, so he knew we weren’t a threat, so he was down with sharing the place with us.”

Then my mind started to wander. Maybe he was hiking off trail because he was following his own path that existed before there were any real trails. Having no water or visible food certainly lines up, and yea, there are mountain men wandering around up there, but who’s going to go through that much effort to come off like a spitting image of Muir himself?

It could have been just some mountain man a little off his rocker. That’s what I would have written it off as (if not hallucination on my part) if the whole deal was just my spotting him 50 yards to my left. But my brother also saw him, then he made contact and picked up even more Muir-ish details, and that’s why this is still a campfire and whiskey story of mine many years later.

I’ll never forget that look on my brother’s face when he saw those Muir images. So, until I hear a good reason to the contrary, that was Muir’s ghost.