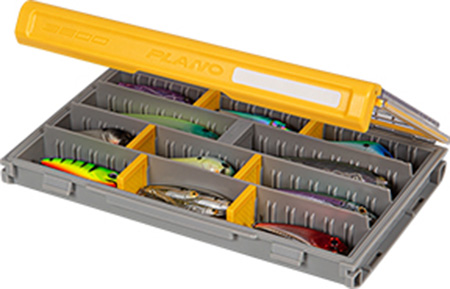 For some, fishing is a way of life. It’s hours spent studying charts, memorizing holes, points, and structure and checking forecasts days in advance of a trip. Top anglers meticulously organize tackle for fast access, tie on baits with precision and care, and do whatever it takes to give them an edge.

With anglers like this in mind, Plano obliterates the status quo of tackle storage by giving dedicated anglers what they deserve, the EDGE. Plano’s new EDGE is the most technologically advanced tackle storage system to date.

The EDGE family consists of10 boxes and each of them are loaded with features of which every angler has dreamed. Two years in the making and countless hours of research and development led to a tackle storage system that solves every major storage problem an angler may encounter.

The EDGE is built on the familiar Plano 3600 and 3700 Stowaway footprints. Four EDGE boxes are built for general storage in either standard, thin, or deep box configurations.

Starting with its Duraview crystal-clear lid, the EDGE Series makes identifying baits and terminal tackle a fast affair. No more opening and closing multiple boxes to find a certain lure or bait. When closed, the Dri-Loc watertight seal makes a barrier that moisture that cannot penetrate. Another unique feature of the Plano EDGE is the new patent-pending, one-handed latch. Unlike most waterproof Stowaway’s that have three latches, the EDGE line has one, oversized latch that can be opened simply with just one hand. Durable, steel-pin hinges finish off the rugged lid and marry it to the EDGE’s base for years of use.

Plano’s new exclusive Rustrictor anti-corrosion compound is infused into the base of all EDGE boxes. Rustrictor prevents terminal tackle and expensive baits from corroding. Water Wick provides further corrosion defense from a water absorbing desiccant divider, giving EDGE one two punch against rust and corrosion. Patent-pending, pre-separated, vented dividers allow for air circulation. They are also recessed into the base of the box so that terminal tackle and smaller items don’t migrate throughout the box. The EDGE also features an innovative labeling system on the latch of every box.