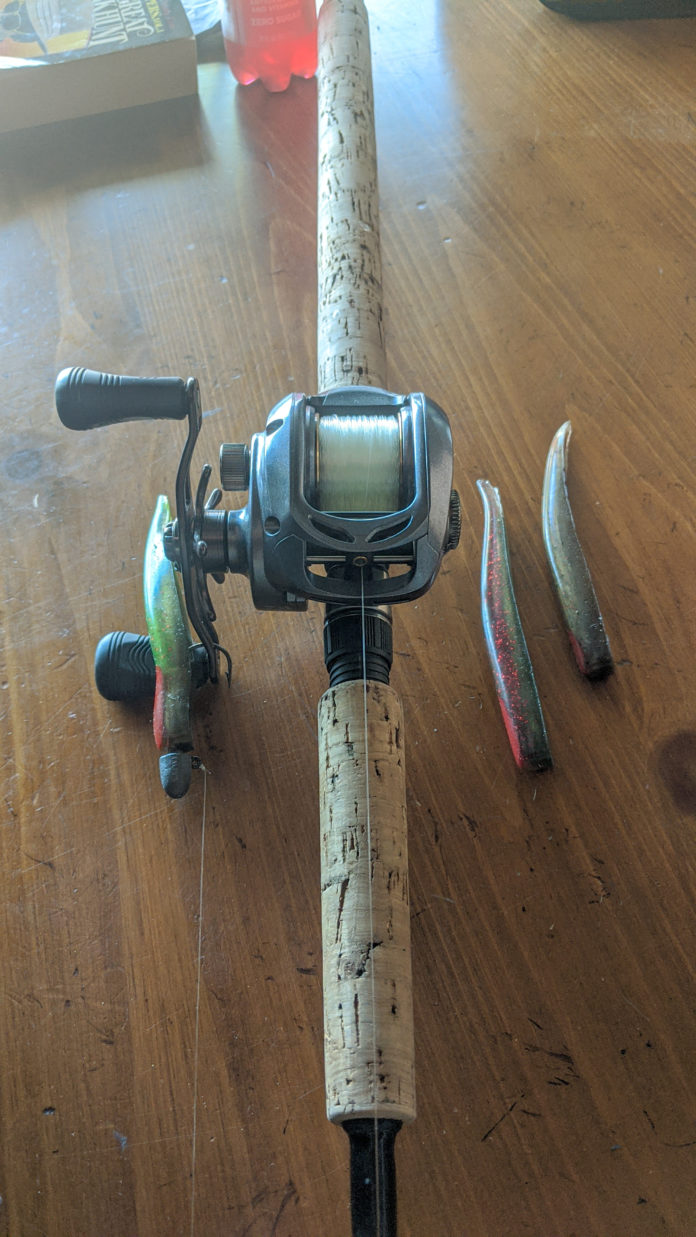 Like the soft stickbait in the freshwater bass world, there’s no wrong way to fish a slug for calicos

SAN CLEMENTE – A buddy of mine once told me he stopped fishing Senkos for bass, and when I asked why, he said “because they always work.” That’s a nice problem to have, and I’m pretty much the opposite in most cases. Few things actually “always” work, but a lot of things work a lot of the time, and some of those applications fit that bill regardless of the skill level of the angler. When I’m looking for that while targeting bass from a local sport boat, I’m reaching for slugs.

Like everyone else, I came up fishing live bait with the standard, proven fly line or sliding-egg-sinker angles of attack. Early in the game, I knew guys fished plastics for bass, but I never gave it a real shot because it always made sense to me to use the real thing rather than imitating it. Years later when I was going on local trips a lot more often, I realized not only will plastic work as well as live bait, but it will also outproduce the real deal in certain situations. I’ve had a lot of fun using plastic swimbaits, but when I’ve stood out as the “hot stick” on a 3/4-day, 1/2-day or island trip, it’s almost always been on slugs.

The rigging options are simple, the baits are inexpensive and last a relatively long time and it’s almost impossible to fish them wrong. The first time I made a point to fish them the majority of the time was on a half-day out of Dana Wharf. I got on the board with a live-bait calico (signature move), then went to the slug and proceeded to wind in 3 or 4 for every one any passenger on the boat would catch. The deckhands were fired up (they love it when bass are eating “rubber”), but I started feeling the stares. Never wishing to come off as “that guy,” I started looking for kids to hook up, then it was first timers on the bow and I no longer felt the glares. I was now the ambassador of half-day joy.

It’s the constant make-up of half-day trips that allowed such a bassin’ beat down: a few guys who know what they’re doing and a forest of rent rods. When a boat is loaded with greenhorns, the crew is almost always going to put them on sinker rigs for a couple reasons: they’ll drop them over the side rather than cast them and create a tangle fest, and it does get bit. When I was throwing the slug that day, a big part of it was being the only guy fishing near the surface. It’s kind of like when everyone’s on the bottom, and the few anglers fly-lining a bait or throwing surface iron pile up better numbers. They have a monopoly on the surface action.

So yea, for one I was the only one getting out and away from the boat. I had a 5-inch MC Slug on a darter-type jighead, and I was throwing it on a lighter 7-foot, 6-inch rod which is a bit of a noodle rated for 10- to 20-pound line. It’s paired with a Daiwa Lexa 300 loaded with 12-pound mono, but fluoro is going on this year. Even with a lighter leadhead (I always start as light as possible, maybe a half or even 3/8 ounce), I can cast it a mile with that setup, and I’m able to reach the edge of the kelp when fishing the local beds.

When it’s on, it not only almost always gets bit on the sink, but it gets bit within five seconds of hitting the water. If there is any technique to this – beyond landing close to the weeds – it’s finding that sweet spot after the cast where the line is just slack enough to allow the slug to drop vertically, but “tight” (for lack of a better word) enough the angler can detect the bite before the reel is even in gear. While you can feel a bite when a bass runs off with it and straightens out the slack, watching the line where it enters the water will also reveal bites you can’t feel. So if you see that line move in a weird direction, go ahead and swing on it. Should a slug not get picked up on the drop, I’ll let it continue to sink to different depths before working it back with varying retrieves (stop-and-go, jerk, straight retrieve, etc.), but the sink is really where it’s at. If a calico wants a retrieved bait, that’s when I’ll go to a traditional swimbait over the slug.

The specific hardware as well as the slugs themselves all fit in a single 3600-size tackle tray. I primarily use MC Slugs in various sizes, and almost all of them are in a darker, natural color with the “wounded soldier” pattern my number one followed by various brown bait or red-crab colors. I have been experimenting with some split-tail fluke-style jerkbaits with some success when fished the same way. I also like a couple different leadhead styles including darter heads, bullet style and weedless options including Warbaits Warheads with the actual weed guard, and sled heads which allow a leadhead hook to be rigged Texas style, barely poking through the top of the bait.

Smaller slugs can be thrown on a light baitcaster like mine, or a comparable spinning setup. For bigger baits, or even a situation where you need to throw the smaller stuff on heavier gear, I have found they usually get bit just as good on heavier line. On WON charters, I don’t bring my own gear. Instead, if I do sneak some casts in, I grab one of the half-dozen or so Daiwa demo combos we bring on every trip for anyone to use. The lighter of those is still a (albeit newer version) Lexa 300, but they are filled with 50-pound braid to 30 or 40-pound leaders and matched to a much stiffer Proteus rod. The little guys don’t put up much of a fight against that rig, but if a bruiser island calico or breezing yellowtail picks up that slug, you’ve got a fighting chance. 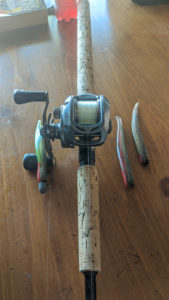