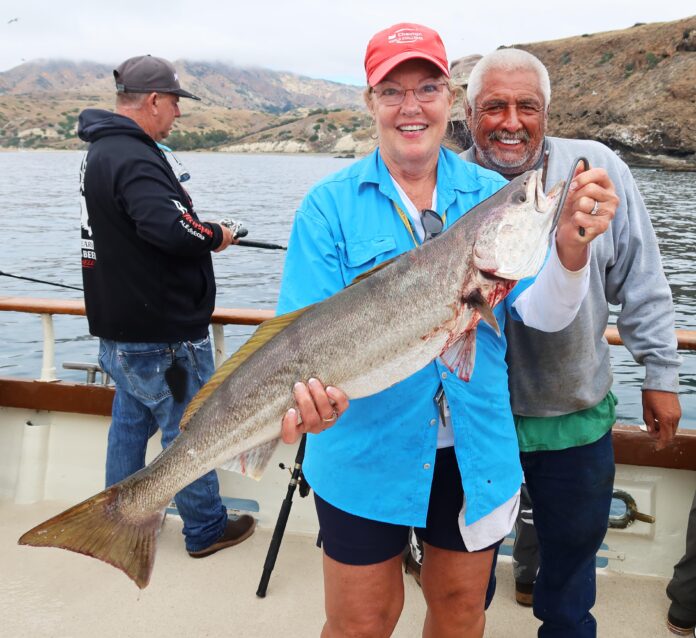 VENTURA — Year after year, the Western Outdoor News Channel Islands Shootout has been the go-to competition for central coast sportfishing. This year’s event, the 14th in the long line of successful contests, brought out many of the regular, more experienced anglers, and some that were new to fishing the Channel Islands.

Two boats worked the east end of Santa Cruz Island in last week’s 2022 Shootout. Island Spirit and Pacific Eagle left the docks at Ventura Harbor Sportfishing just after 5:00 a.m. under overcast skies arriving in the sheltered waters off Pedro Point in two-and a half-hours. During the run over sloppy seas anglers checked out the swag given out at check-in and rigged up for the day’s action to follow.

Goodie bags included High-Seas Grand Slam Monofilament leader, hook packs from Gamakatsu, discount coupons for WON subscriptions, and koozie’s from HUK Gear, all bundled into a water-proof bag from Frogg Toggs. There also was a gift card from HUK Gear for $100 and a 500-yard spool of Berkley ProSpec Chrome monofilament to go to the angler from each boat with the heaviest fish for the contest.

Arriving at the targeted zone, the boats both took aim at white sea bass since counts of the grey ghosts had been strong at the island in recent days. Anglers were excited to be fishing the competition with top honors and prize money of over $500 up for grabs.

Captain Cody Rogers set up the first stop of the day for Island Spirit, anchoring at a spot offshore, east of the island. Using one of the suggested rigs, a 1/4 to 1/2 oz sliding sinker and a size 2 hook for live bait, a jig for barracuda, or a dropper or reverse dropper rig to try for a halibut or even white seabass, anglers took to the rails of the 65-foot sportfisher. On this first spot, while setting up a chum line, barracuda and calico took a few offerings, making a slow start to the day as reported by WON Rep, Dylan Depres.

Across the water and inshore, the 20-anglers working the decks of Pacific Eagle were taking aim at the prized WSB hoping to score a hit with the larger targets.  Anglers aboard Pacific Eagle had the benefit of using the roomy bunk area below deck, to get some rest after the 5:00 a.m. departure from the docks, and again on the long ride home.

Captain Mike Mings, owner/operator of Pacific Eagle, set up on anchor and deckhand Michael Macdonald began tossing chum into the water. Soon, fish began to show – legal and short barracuda and bass – making a better start to the day for PE anglers. Oxnard local, Will Smith, fooled the largest calico bass of the day using a full-sized sardine on a single dropper loop rig.

While some still soaked ‘dines and anchovy on double and single dropper loop rigs, taking aim at the prize money by catching the hoped-for white seabass, others set out to bag some ‘cuda and bass. By midmorning, Pacific Eagle was on its fourth anchor set-up when the custom spinning rod and reel combo fished by Gloria Wright began to spin out line at an alarming rate.

Gloria had come out for the event with husband Larry and Camarillo neighbors Tina and Doug Herford, and all four of the locals managed to get fish throughout the trip.

Working the rail, threading her way under and over anglers nearby, Gloria laughed and smiled broadly when the gaff went into the first of four WSB boated aboard Pacific Eagle. The 10-pound fish ate a sardine pinned on a 2/0 hook below a sliding egg sinker giving Gloria Wright the best shot of the morning’s fishing, but as it turned out, just out of the running.

Frequent WON Charter angler, Robert Groeber, brought along his son, Travis to take a shot at the title. The pair had a tough day of it but enjoyed their time together on the water throwing Colt Snipers for ‘cuda.

Cameron Barton also fished with his dad and the young man bagged several ‘cuda and took top-honors for Island Spirit with the heaviest fish of the day – a 7.6-pound barracuda. The slimer earned him a gift card from HUK Gear for $ 100.00 and a 500-yard spool of Berkley ProSpec Chrome monofilament. The second heaviest fish taken aboard the boat, a toothy barracuda weighing in at 6.5-pounds was landed by angler, Pancho Diaz.

Anglers on both boats bagged more ‘cuda and bass but it was Pacific Eagle fishers that showed excellent skill and true aim, hitting the target again and again.

With little time left in the competition frequent WON charter angler, Don Merrill found the bullseye by hanging a big fish on one of the last drops. Don has fished many of the charters and has plenty of action on any given day. But the day had been slow, and Don’s sack held few fish until, while soaking a sardine, the heaviest fish of the Shootout grabbed his bait.

Like a pro, he moved up and down the rail, working in line while on the move. Coming to color 20-feet below the surface, the fish was seen to be a larger grade and with an expert gaff by Capt. Mings, the 21.4-pound white seabass came over the rail.

As the boats ended the fishing day a text from Tim Moore aboard the Island Spirit sent everyone over on Pacific Eagle into a spin when the angler showed several huge fish, supposedly taken during the contest. Further examination showed the pictures to be bogus and it became clear that the top three fish would come from Pacific Eagle.

Arriving back at Ventura Harbor Sportfishing for the 4:00 p.m. final tally, the scale was set up, the weigh-in completed, and prizes awarded. The ‘cuda, the WSB, prize money, and the swag made this 14th annual WON-Ventura Sportfishing Channel Islands Shootout a great time to get out and fish.