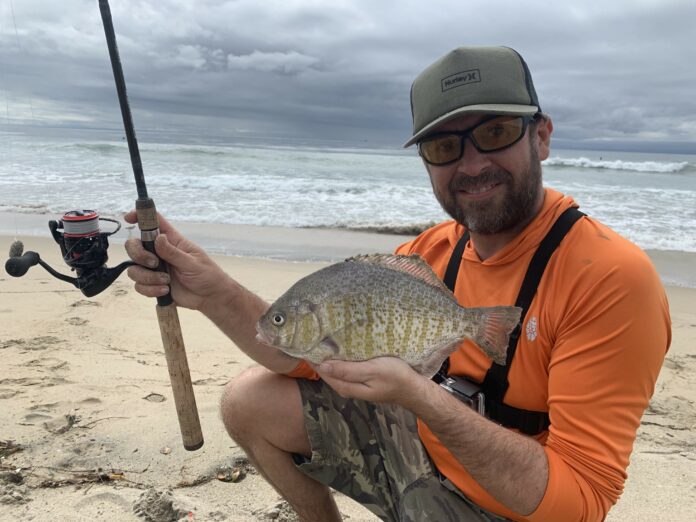 Roving one of the West Coast’s big sandy beaches with light tackle targeting surfperch is a great way of blowing away the winter slowdown. Here’s what I’ve learned over several seasons of professional guiding for surfperch.

Perch love a visual element to any bait, and around fall I switch to using a small orange or red faceted 4mm attractor bead just above the hook. Surfperch are clearly visual hunters with eyes at the front on each side — like a freshwater panfish — giving them great binocular vision for spotting prey.

Giving them something extra to spot and home in one definitely picks up a few extra fish over a session, and small faceted beads catch the light perfectly as they tumble around in the surf. Yellowfin croaker also love a bit of visual attraction like this, less so spotfin and corbina.

It’s not exactly breaking news that the Gulp! Sandworm in 2-inch camo format is a great bait. But I now chop a half inch or so off the thicker end of the grub to leave a more slender bait that fits perfectly on a size 4 or 2 hook. I started doing this after noticing lots of short bites on the full-size grub.

In winter, I want to catch everything in front of me — small and large ­— and I’ve found that a slightly smaller grub hooks a lot more fish, and still attracts the larger specimens. I use the small half-inch ends to tip bait-and-wait rigs or on the hook when there’s a bunch of smaller fish around. Just nip a little section off the head end with your fingernail and thread onto the hook as normal with the hook exiting two thirds of the way down the body on the dark side.

Technique-wise, cast as far as you can to cover lots of territory, and begin a very slow retrieve while staying in direct contact with the sinker so you can feel it bouncing on the bottom, stopping occasionally between wave sets. Imagine it’s a dead sandworm being washed around surf. It’s not zipping from A to B in a straight line. It’s stopping, starting, twitching, bumping and moving around. A curly-tail grub or similar soft plastic bait lends itself to a more consistent, steady retrieve with the built-in action and movement.

The worst thing you can do when surfperch fishing is to stand in one spot for a couple of hours. I’ve found schools of surfperch to be pretty mobile once the summer-level concentrations of sand crabs have gone. They’re actively hunting in the shore break area in small groups and will quickly move to the next food-laden bit of structure.

So, keep moving. If you don’t get a bite in half a dozen casts, head to the next likely hole, trough, channel, rockpile or jetty. Hunt the fish down if you want to rack up some good numbers — don’t expect them to stay put or come to you.

With fewer corbina around in fall and winter, I use 6- or 8-pound fluorocarbon (my first choice this season has been Opsin in 6-pound) for perch fishing whereas corbina fishing calls for a touch more finesse and 4-pound leaders. But surfperch seem less fussed and will readily hang themselves on heavier gear, which is useful because it tangles less than really light tackle plus there’s very little chance of a breakage.

A ¾- to 1.5-ounce egg sinker rigged Carolina-style is the perfect rig for this style of fishing, and the only difference between rigging for SoCal surfperch and Central or Northern California fish, is that I use a bigger sinker (up to 2 ounces) and a whole grub on size 1 or 2 J hook.

With perch more likely to aggressively hit a small grub or soft plastic curly tail-style bait, you can get away with a much shorter leader compared to summer light line
fishing with sand crabs.

My go-to grub fishing leader is 20 to 25 inches from swivel to hook, whereas in the summer when sand crab fishing for a wider variety of species like corbina and croaker, I’m using a 30 to 35-inch leader for a more natural presentation.

Want a walleye surfperch or similar? Find some rocks

Walleye surfperch are one of the smaller surfperch species and I’ve been asked to target them specifically a few times by species hunter anglers. The quirk with walleye surfperch is that they love rocks, and I’ve never caught one more than a few meters away from a jetty or rockpile.

Barred surfperch and their cousins, the redtail and calico, seem less fussed about this and will roam any sort of beach-type habitat freely. Not so with the walleye. So, if you want one of those weird little critters to add to your life list, find some rocks, use a small one-inch section of a sandworm (real or fake) and a size 6 or 8 hook.

Slicing up a few surfperch for shark bait one winter led me to examine their stomach contents. They were all full of sand clam shells — those little bean-shaped shells that often litter sandy beaches at the high tide mark. Further reading revealed that surfperch have evolved incredibly strong pharyngeal teeth at the back of their throat, perfectly capable of crushing up clam shells to access the digestible meat inside.

Knowing this led me to specifically target beds of clams that season with great success. I now look for and fish over beds of live clams when I can find them, and I find this strongly correlates with the presence of fish, especially when the sand crabs
have disappeared

Know the difference between a male and female barred surfperch

Although common, lots of surfperch populations are under pressure because they’re tasty and pretty easy to catch once you find them and know a few basic tactics. I highly recommend taking only male surfperch for this reason, also because large females are often pregnant and prone to spilling out baby perch in the shore break as fast as you can return them.

Surfperch have a 20-fish limit in California (with no more than ten of one species) and if the large female you’ve just taken spills out 10 babies in your bag just before the game warden checks your kit, you’re in big trouble. It’s just not worth the risk. 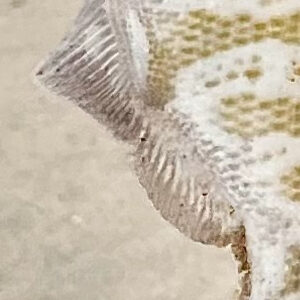 The first trough or lip usually holds the smaller fish

That little ridge in the shorebreak where the surf is carving out a nice bit of structure is the go-to spot for lots of perch species that favor sandy beaches. Clients don’t believe me that they’ll catch fish in a foot of foaming white water, until they get bit.

But the smaller fish are the ones more commonly found in this zone, whereas the larger slab-sided models are sat a little further out in deeper water, presumably where the turbulence is tolerable for them to exist and feed.

So, target the first lip and inner trough with a small hook and half a grub if you want to catch lots of smaller models (great fun fishing with kids and beginners) and the outer structure in deeper water for the eater-grade perch if you’re a little more experienced. Either way, every retrieve ends up with a long soak in the shore break to maximize bites.

With the surfperch living in stony, rocky places or pebble-laden beaches, maintaining a good degree of hook sharpness is really important. It’s worth checking visually and on your thumbnail (if it scores the nail easily, it’s still pretty sharp…) every few casts to see if the hook point has been turned over on a small stone or shell. If it’s anything less than sticky sharp, cut and retie.

Surfperch have evolved to have pretty tough, bony mouths and getting a good hook hold is aided by a super-sharp hook. Also, the baitholder-style hooks with beaked points are not the ones for grub-style fishing. Use a fine wire, medium-shank J-hook in size 4, 2 or 1 with a straight point and leave a 3 or 4 mm tag end on the hook knot to help hold the grub in place. A couple of minutes in the sun will toughen up any soft plastic sandworms that slip down the shank of the hook.