This is WON’s Repower Report, brought to you by Suzuki Marine. This feature showcase one of many repower projects performed by Suzuki’s professional dealers and mechanics in Southern California. Each new report will feature product specifications on different Suzuki engines for all types of boats, as well as the story behind the project about the anglers and their boats.

In this issue we talk to Seal Beach native Jake Scarbrough. He and his brother are the proud owners of the offshore clothing and lifestyle brand Haggard Pirate.

What’s the make and model of your boat and how long have you owned it?

Our boat is a 1999 Parker 2320SL. It’s a 23-foot Pilot House model – probably one of the most popular trailerable sportfishers here in Southern California and we’ve owned her for about ten years. 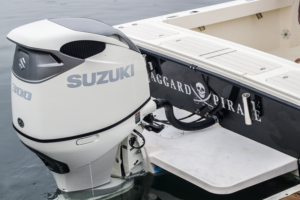 How do you use the boat? Fishing, diving, etc…

We honestly haven’t ran her much in the past year and a half and we were actually fishing out of a smaller Boston Whaler 17 Montauk that is wrapped just like the Parker. We primarily use our boats for fishing offshore and diving. Our plan is to now run the Parker more often and even charter the boat. We’re excited about the idea of being in a nice pilot house – not outside in the cold, spray and wind!

What’s the most memorable trip on the boat?

There have been so many it’s hard to say. We love running the boat over to the front side of Catalina in the summer time and sitting on the hook in a small cove and just chilling!

How did you decide to repower with a new Suzuki?

Prior to the repower we were running an older 225hp two-stroke. When we found out about the new DF300B we knew this was the right set-up for us. It’s super quiet and with the Contra Rotating props it’s also very maneuverable around the docks at slow speed. Suzuki is also the only outboard out there with a 2-prop drive and they produce a lot of grip which is perfect for a heavy fishing boat like the Parker. We’re just now breaking in the motor and at half throttle, (about 2,800 RPM) we were already easily up on plane. At only 4,400 RPM we we’re cruising at 32.7 mph and the max operating range is between 5,500 and 6,100 RPM so this boat is going to fly!

Any other projects or major upgrades on the horizon for your baby?

Thanks to Garret and the team at Maurer Marine we’ve now got her pretty dialed in. The boat already had a nice Bluewater Bait Systems Tank and Raymarine Electronics and the guys added the 2nd steering station up top as well as a Suzuki Multi-Function Gauge in the pilothouse. Pacific Boat Trailers worked on our trailer as well so we’re ready to go!