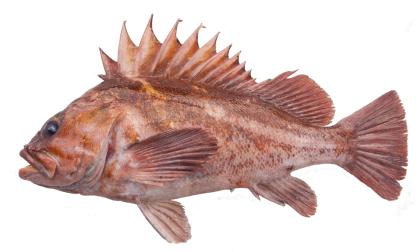 At this week’s California Fish and Game Commission (Commission) meeting, the Pacific Fishery Management Council’s federal management measures for our groundfish fisheries were approved. Next steps are the state’s adoption hearing November 1 and on the federal side, publication in the Federal Register.

The Department of Fish and Wildlife (CDFW) staff summary described the situation most concisely “…each management area will incur a significant reduction in fishing time in nearshore waters. The severe reductions are necessary to incorporate the best scientific information available from the 2021 stock assessments for quillback and copper rockfishes off California and the rebuilding analysis for quillback rockfish off California.

See the accompanying table and map for the state-wide 2023-2024 scenario. In the simplest terms, and none of this is very simple at all, the Total Allowable Catch or TAC of both copper and quillback rockfish had been reduced by the most recent data-moderate, length-based stock assessment results, to less than half of the number we’d been catching. That catch has been mostly by recreational anglers. 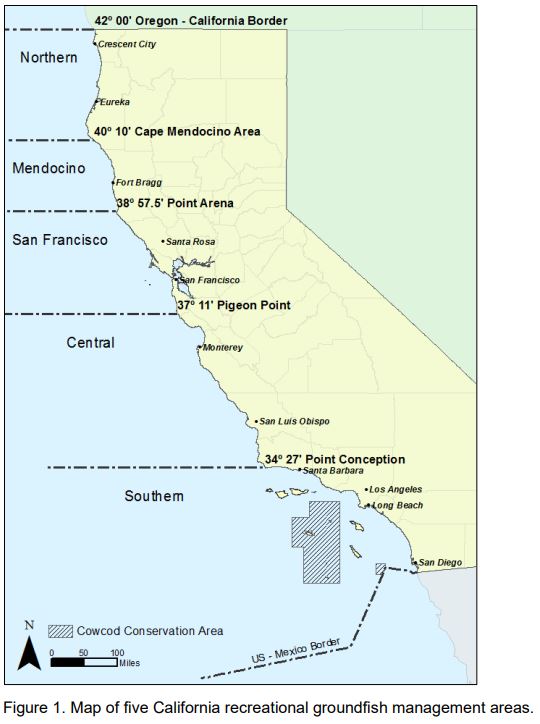 Most groundfish, including everything we refer to as “bottom biters,” are managed at the federal level – coastwide from the Canadian to the Mexican border. At the state level, state management adopts these measures in order to have consistent regulation between state and federal waters. State representatives play a big part in the initial federal process though.

The federal groundfish management cycle runs in two-year chunks, however, there can be what’s called “in-season” measures that change the regs on a temporary basis. This happens most often when a large portion of the commercial allocation hasn’t been caught, so catch limits are liberalized, or when catches are coming in too quickly and a season needs to close early.

For example, a couple of years ago when the 1-fish lingcod limit was shown to be more restrictive than needed, the limit was raised back to two lings “in-season.”

The CDFW Staff was instrumental in looking for ways to provide additional public access in 2023 and 2024 where the science supported it. This came from two primary areas.

The first was deeper water species in the Shelf Complex, one of three primary groupings by habitat depth preference the many rockfish species are split into (Nearshore, Shelf and Slope). The overfished ones had all recovered except yelloweye, and it was well on its way. This allowed for new access to these previously restricted deeper waters.

The second, was both ocean whitefish and sheephead are not federally managed, and the Commission had the ability to provide additional access. Numbers of ocean whitefish appear to be booming and although the sheephead catch has been too high, a simple reduction in bag limit to two modeled to fix that, no change in season length needed.

Thus, the Commission, following CDFW staff recommendation, moved ocean whitefish to an all-year season, and kept the sheephead season length the same as it has been, rather than reducing it to match the shortened nearshore rockfish access.

The stakeholder group of fishery representatives included folks from all along the California coast – party boat reps from Eureka to San Diego, private boaters too. We each provided input as to when our few available inshore days would provide the best benefit, considering other opportunities available.

For example, up north it was important to keep the crab-cod combo trips available during times when other fisheries like salmon typically weren’t. Down south our fleet ultimately decided an All-Depth season centered up on the spring and summer worked best.

In addition, not only did the deeper water component of the new All-Depth season help spread the effort off inshore waters where copper are caught, but a fall deep-water-only season will allow an old-school rockcod fishery to happen, instead of full closure later in the year.

But there’s more. Some of the SoCal offshore banks are much shallower than 100 fathoms, yet outside the current 100fm line. The 9-mile off San Diego is one such bank. It will open for the first time in nearly 20 years and stay open into the fall months.

I mention “in-season management measures” above. One of the efforts you may have seen already is by skippers and private boat operators to voluntarily avoid copper and quillback rockfish. Crews have been releasing almost all that are caught, using descending devices.

The plan is to keep copper and quillback mortality below the 2023-2024 TAC with our current full inshore season. If successful, using in-season management, we would be able to extend the Central and Southern management area’s All-Depth seasons into the fall in 2023 and 2024.

So far, it’s working well. All are doing a great job out there. Preliminary estimates in June showed we were at just 23% of our 2022 TAC and on a trajectory to end the season under the 2023-24 TAC on copper.

It can’t be understated how much effort CDFW staff have put into keeping anglers on the water and our lines wet. They looked for opportunity and provided analyses of season options for projected catch of these two constraining species.

There will be some challenging nuance to the new regs. One is during the deepwater only portions of the season, no rockfish of any type may be aboard while lines are in the water in depths less than 300 feet/50 fathoms.

Another is anglers will need to be able to tell rockfish apart and which are in the Nearshore complex – off limits during the deep-water-only portion of the season. At the same time, catching these nearshore species out past 300 feet is highly unlikely in the first place.

Merit McCrea is saltwater editor for Western Outdoor News. A veteran Southern California party boat captain, he is a marine research scientist with the Dr. Milton Love Lab at the University of California at Santa Barbara’s Marine Science Institute. He serves on the Groundfish Advisory sub-Panel of the Pacific Fisheries Management Council, the Santa Barbara Harbor Commission, The Channel Islands National Marine Sanctuary Advisory Council and the CCA-Cal State Board. He can be reached at: merit@wonews.com