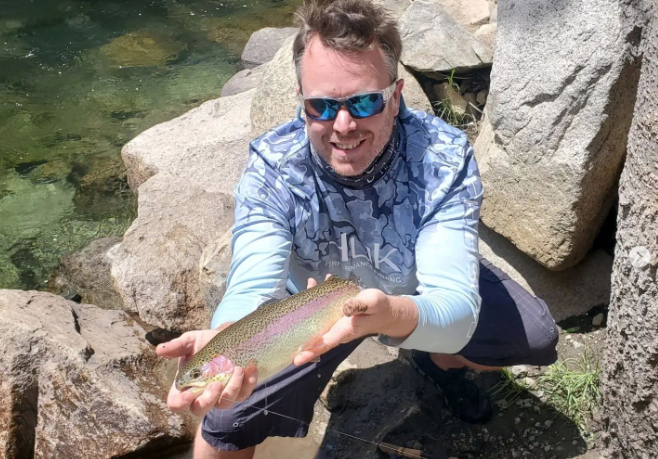 JULIAN – Trout anglers are always going to sling their Thomas Bouyants and Rooster Tails and what not, but in a derby situation where prizes are on the line, all bases need to be covered and versatility is paramount. By all means, chuck the metal, but give that second-rod stamp a workout with Berkley’s arsenal of trout baits to maximize that shot at a full stringer.

Every Eastern Sierra trout opener, the Berkley promo guys in town always jam a fistful of Berkley products in my pocket. I usually hand a lot of them out (like they do) but I hang on to some, and I’ll use them mid-day when things get slow. Anyway, I can say with absolute certainty Mice Tails are among the best floating-bait products out there. A split-shot rig and a single, light-wire Gamakatsu hook does the trick. Go ahead and Carolina-rig it with a heavier sliding sinker if a longer cast is needed. Mice Tails work when still-fished, but they’re also deadly on a very slow retrieve along the bottom, and when it’s time to wind it in for the next cast, don’t burn it in because trout will occasionally chase them as they’re “swimming” back in at faster speeds. Berkley just launched garlic Mice Tails, so the sooner you try them, the more likely you are to have something a little different than everyone else. Just for trivia’s sake, Mice Tails came about when Berkley decided to package a one-piece, easily stored and rigged answer to the popular live-worm-and-salmon-egg combo.

If you have confidence in fishing inflated nightcrawlers, these are an ideal substitute that actually have a handful of advantages over the real thing. For starters, you don’t have to worry about keeping them alive, and the small packs can be stored just about anywhere without taking up much space. Pinched Crawlers are available in 1- and 2- inch sizes, so no more cutting live worms to size, and they already float so no inflating needed. I was up in the Sierra in the last week of July, and fishing was slow in all the lakes due to water temps flirting with if not exceeding 70 degrees, but Pinched Crawlers produced at some level wherever I went. Also, there are a lot more people using Mice Tails out there than these scented baits, so there’s a good chance you’re separating yourself from the pack (which can be key in a derby setting) with these, too. Rig them on the same setup as Mice Tails.

Berkley Trout Worms were the predecessors to Mice Tails, and I remember working in a tackle shop and laughing when I first saw them (mid 90s). Well, I was wrong and they remain one of the most effective baits on the market. These are arguably the most 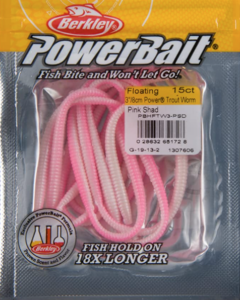 versatile trout bait in Berkley’s arsenal as they can be fished on a split-shot or Carolina rig with a single hook and with an egg sinker or water-filled bubble, and they also will get bit on the slow retrieve like Mice Tails. I reach for Trout Worms when I’m looking for the smallest profile bait of the bunch when it seems like trout are looking for something a little less bulky. They also make great trailers for minijigs that can be cut to size, and they are killer when drifted in the middle of the water column with a split shot in deeper water when the fish are hanging out offshore.

In the interest of having your bait stand out in the gauntlet of similar baits and lures being slung all over the place during a trout derby, PowerBait Pre-Rigged Atomic Teasers are the way to go if you’re a jig slinger. While you can add a Power Worm to anything, these come perfectly pre-rigged, and they not only add scent to an artificial lure, but they give a jig a more-substantial profile, change the swimming action and make them a little more castable. The patterns available in the Atomic Teaser family are drilled down to the most effective colors, and they come in 1/16- and 1/32-ounce sizes. Use the heavier one for longer casts and deeper fish, and the lighter one for sight-fishing for schooling trout or under a bobber if there is some chop on the water.

Everyone’s already using PowerBait, and for good reason: it’s been filling more stringers with trout for over three decades than anything else, and that will likely never change. Replace the single hook with a treble (size 16 or 18) on any of the rigs listed above, and have at it. Elite bait dunkers will go with a longer (3 feet give or take) leader in warmer water when weeds are prevalent. There are a dizzying amount of colors and “flavors,” so have a few options there, but to really set yourself apart, have some fun tinkering with the sub-varieties within the PowerBait family that many anglers overlook. Check out the Natural Scent and Twist varieties along with Turbo Dough and Gulp! Dough to take advantage in that department. Save time by swapping the swivel for a Carolina Keeper in your Carolina rig and just run straight 2- or 4-pound line with one knot instead of three and a leader that can be adjusted in seconds.