Anglers power through after event pushed back into June

LAKE HAVASU CITY – In the final months leading up to the 38th running of the WON Lake Havasu Striper Derby, the narrative among tournament organizers and regular participants alike centered around the how the unprecedented postponement of the event from May to June would affect the fishing as well as the attendance. When the dust had settled in Lake Havasu City, it was clear that modest expectations had been exceeded, and some great new storylines emerged that were well-timed for a fishing community that was just starting to emerge from the shadows of a bummer-filled 2020.

At the beginning of June, less than 50 teams had signed up as anglers sat tight in their holding patterns waiting for things to shake out. When it got closer to go time, online registrations poured in followed by plenty more lining up to register on-site at Anderson Toyota in Lake Havasu City on Friday, Striper Derby Eve, inflating the total to 94 teams for 2020. While the top story in years passed is often about the Striper Derby winner, and that is the case in 2020, none have been as cool as this one. Bob Jones was named champion along with the other half of Team 38, his son, Michael Jones. Team numbers only reflect the order in which they registered, but not in this case as WON Tournament Director Billy Egan gave them Team 38 in honor or Bob’s streak of fishing in 38-consecutive Striper Derbies. For those doing the math at home, yes, that means he’s fished in all of them, and he’s the only one who has done so. Prior to the awards ceremony, Bob was only told he had “done pretty well, and for sure finished in the top 10 by WON’s Bill Jaenicke. Egan announced and awarded the top-9 finishing teams one at a time before arriving at the new champion, and he could barely spit it out. When he did, an emotional Jones strutted out of the crowd and grabbed his trophy and long-overdue glory with his son by his side. It was obvious the top finish meant a lot more to him than the pile of premium prizes he also got to take home.

“I was truly overwhelmed when I was announcing the top 10 teams,” said Egan. “I hadn’t taken the time to even look it over since my focus was on putting on the best awards ceremony we could based on the conditions, so to see Bob’s name at the top of the list brought tears to my eyes, because he exemplifies the spirt of this tournament. To be present when on his 38th event, the only person to fish every striper derby, he finally put the recipe together to win, and at the same time humble us all with that win.”
Earlier in the awards ceremony, all in attendance watched Todd Langston stroll up to the stage (which this year was the tailgate of a Toyota Tundra at Anderson Toyota since the gathering had to be outdoor and spread out) to collect four Big Fish/High Roller checks in the amounts of $990, $660, $336 and $168 for a total of $2,154. Not a bad score for Langston who finished a respectable 26th overall along with his partner, Bridget Hall.
The biggest single check went to Cameron Cornett who topped the High Roller (which is an optional entry most anglers happily thrown down on for a shot at more money) list with his 7.19 striped bass he bagged on Saturday which was good for $1,650. That was the second-biggest fish weighed at Striper Derby, and it helped him and Frank Costello finish 7th overall 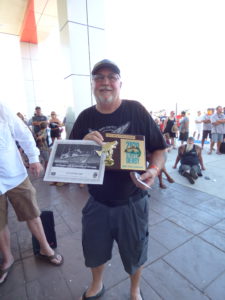 Striper Derby’s overall Big Fish was the 9.64 pounder caught by Scott Kelly. As one of the newest (and biggest) additions to the long-running event, Kelly earned a multi-day cow tuna trip aboard El Pescador out of Puerto Vallarta. His team finished 45th overall and he still picked up one of the top prizes in the event.
All participants have an equal shot at the Grand Raffle Prize which has been a Klamath 16 EXW matched with a trailer and 40 hp Suzuki outboard. It’s a simple matter of having your number called, and in 2020 that name was Alfonso Rodriguez of Lynwood. He fished with his wife, Lizzette Blanco, and had previously agreed with friends David and Joe Ratcliffe that if any of them won the boat, they’d all share it.

“This is what Striper Derby is all about!,” said Rodriguez before hooking the grand prize up to his truck. He’s almost a 10-year Striper Derby veteran who missed last year to have a baby only to pick up another baby of sorts a year later.
The portable, inflatable and very fishy Sea Eagle FishSkiff 16 paired with a 6 hp Suzuki was another high-end raffle prize, and it went home with Riverside angler Roger Hamilton who finished 24th overall with teammate Joe Manor. On Day 1, it was inflated and in the water for a (motorless) test ride near the docks and official weigh station near London Bridge Resort.

Top finishers and raffle winners alike also picked up prize packages powered by generous sponsors that included items like premium hard and soft coolers from Engel, SKB TacPaks, rods and reels from Abu Garcia and swimbaits, bucktail jigs, wakebaits, jerkbaits and fluorocarbon from Berkley. That all along with the Klamath and Sea Eagle boat and two Suzuki Outboards.
Payouts also go to anglers weighing in individual fish, daily limits and two-day totals that are closest any of a wide range of randomly generated Blind Bogie weights. A huge stack of $178 checks were handed out to the lucky (and it is blind luck) to those lucky anglers, some of which only weighed in a single striper over the entire event. The smallest fish in 2020 to score a Blind Bogey check was a little 1.94-pound schoolie.
As far as the fishing is concerned, most anglers familiar with the fishery knew it would be dominated by cut bait tactics in deeper water, and that was absolutely the case under conditions that sent the mercury up over 109 degrees on Saturday and 110 on Sunday. A huge amount of fish were caught first thing in the morning, and the bite tapered off as the sun came up and summer boat traffic became more of a factor. The majority of the striped bass caught were on anchovies either fly-lined or on a Carolina rig by anglers either in bait-and-wait mode (a lot of those guys said chumming was key) or drifting along the right spot of current early in the morning.

There almost no weigh-in line chatter about boils popping up, which was expected, but there were the a few swimbait, umbrella rig and troll fish mixed in.
The top 10 teams and their 2-day (20 fish) totals from 10 on down were Chris and Mike Amen (51.55 pounds), Kyle and Jerry Thergesen (51.83), perennial top finishers Jorge Delgado and Russell Neivar (53.22), Frank Costello and Cameron Cornett (54.60), former Striper Derby Champion (2017) Kenny Baldwin and Noah Kokkinias (56.57), Brian Bain and Russell Taylor (58.21) got fifth, then it was Bill McFarland and Steve Methey (59.35), Michael Brown and Brandon Fox (59.53), John DiFederico and Mark Bosak (60.33) and the 2020 WON Striper Derby Champions, Bob and Michael Jones with a total of 65.25 pounds.
For more fun by the numbers, a total of 973 striped bass were caught over the course of the event for a total weight of 2,199 pounds. Any fish not kept by participants in the derby went directly into coolers brought down to feed the needy or even locals who just wanted fresh fish for dinner. The top 10 finishers accounted for 300 of those linesides for 814.98 pounds.
Clones in the 2- to 4-pound range dominated the weigh in with the top 10 big fish ranging from 5.11 to 9.64 pounds. Goodie bags given out at check-in at Anderson Toyota were also a point of pride for tournament organizers this year. This year’s freebie score included Frogg Toggs waterproof backpacks stuffed with the aforementioned Berkley products, an upgraded tournament hat and each team also picked up a bottle of Chevron Techron Marine Fuel System Treatment.
It was hot out there, and while the vibe from the entire field was of the stoked-it-could-even-happen-this-year variety, everyone is going to be happy to have it back in May in 2021.
“This year’s Striper Derby was flat out amazing,” said Egan. “It was amazing because tradition and the outdoor spirit ruled over adversity. Tradition won over the ‘new normal.’ Yes, it was hotter, and yes, the fishing was tougher, but 94 teams decided that the tradition was worth preserving and sharing it with their families.”