SAN CLEMENTE – When the dust settles on the WON BASS U.S. Open in October, the 2022 WON BASS Angler of the Year (AOY) will be crowned on both the Pro and AAA sides of the field. WON BASS caught up with David Valdivia, the current leader on the Pro side, to get his thoughts on the AOY points race and on his approach going into the final event of the WON BASS season.

The Riverside-based pro currently sits at the top with 500 points, but that’s only a point ahead of Micah Jones and Frankie Mueller who are tied for second, and with only 30 points separating first and tenth, anyone in the top 10 can grab the AOY crown at the U.S. Open at Lake Mohave. 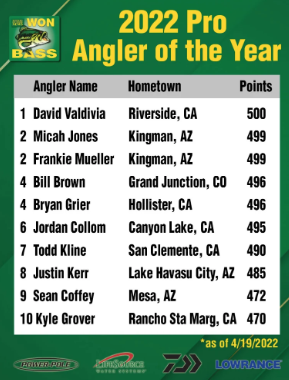 WON: What was your game plan going into the 2022 WON BASS season, and how is it different than in years past?

DV: I wanted to fish the whole season. I’ve always fished the Arizona Open, but I didn’t fish the Laughlin Open because I couldn’t take vacation time, but if the Laughlin Open did count (in the points race), I definitely would have made sure to get there somehow. I do like the team format with co-anglers, and I wanted to see what it was like to fish a full season with all these great anglers.

As the current leader in the AOY points race, does your approach change going in to the final event or do you just continue with what’s been working for you?

I’ll just continue. I’m only leading by a point, so anyone in the top 10 can win AOY. If you have one mediocre tournament, you’ll get beat with that many boats out there.

Of the lakes on the WON BASS tour, which is your favorite?

I like Havasu because it’s a great fishery that it lays out really well. You can catch fish flippin’ in the river, or fish a worm deep in the main lake or reaction baits. There are so many different patterns going on.

What do you think about the U.S. Open moving to Mohave this October?

Honestly, the way I see it, it’s going to be the same group of really good fishermen. It sucks that Lake Mead doesn’t have water, but I’m still going out there like it’s the U.S. Open, which it is because you’re still fishing against the same guys.

I’m excited to go there just because it’s a Colorado River lake, and I really like fishing the whole system. It should fish somewhat similar except there are giant smallmouth in there.

You didn’t fish the Laughlin Open, but I’m sure you heard about it. Did anything stand out?

The weights throughout the Laughlin Open were insane. It was crazy the amounts of 18- to 20-pound bags that were there.

What do you think it’s going to take to make a strong showing in the U.S. Open?

I feel like in October because it’s going to be fall fishing, it won’t be as good as spring, but I think it will still take an 18-pound-bag average to win.