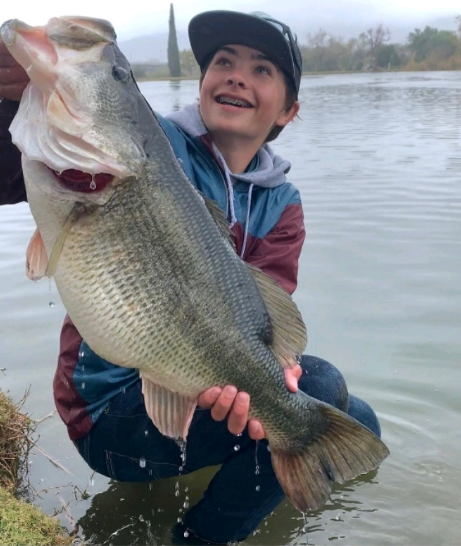 SANTEE — Not many people can say they caught a fish of a lifetime with a lifetime of fishing to go, and the latest member of that club is a fisherman who made it happen when he plucked a largemouth bass at his home lake that weighed a pound for every 15 years the angler has spent on earth.

Lakes well, but in a short outing following baseball practice, the 15-year-old basser had low expectations when lightning struck in the form of a 15.12- pound largemouth bass that has been pegged as the new “lakes” record for the species.

“The whole experience was amazing because I got there after baseball practice and wasn’t expecting much,” said Steveson. “I took this one cast that was kind of an ‘angry’ cast because I couldn’t get bit. Then I felt like I hooked a log and it was on!”

Another reason it was “amazing” is he was only using 6-pound test on his baitcasting combo, and that all-of-the-sud- den became not a whole lot to work with when he had 15- plus pounds of infuriated, Berkley Warpig-inhaling bucketmouth on the business end.

“I’ve always known there were 10 pounders in that lake (Lake 3 according to Santee Lakes staff) but I didn’t know they could grow to 15, so that was pretty special,” said Steveson. “That catch meant a lot to me. I have been fishing these lakes ever since I was really young, and I’ve always seen people catch giant fish out of them, like 9 pounders. I got a 6 pounder before, but having that 15 pounder was just a great moment for me. It was amazing to have that fish on. I finally did it, and it was overall a great experience.”

The bass was released after a few photos. Steveson’s parents were pretty stoked with their son’s accomplishment.

“He’s learned it all on his own from years of research and following guys on social media,” said his mom,” Amy Steveson.