HEMET – The largemouth bass bite has been a grind at Diamond Valley Lake all winter with the saving grace being better fish for anglers willing to power through it. Getting a green bass to go is still a tough gig at DVL, but there are signs of things just starting to trend in a springy direction, and one monster was caught by a young basser thanks in part to a pit stop at the local tackle shop. 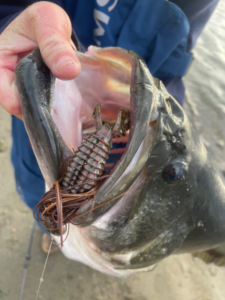 this month,” said Tyler Burnett of Menifee. “We went in and talked to Matt and Megan and I mentioned he should by a few of Matt’s jig he ties for the shop. He then picked out a pack of creature baits to use as trailers, and we got to DVL (the next day) at 4:30 a.m. so we could secure dad’s confidence spot.”

Matt Magnone at Last Chance Tackle in Hemet is the local authority on the fishing at Diamond Valley Lake, and he’s been tinkering (custom paint jobs as well as baits of his own design) with a variety of bass-lure types based on a life-long obsession with local largemouth. They’re called MM Baits and are available at Last Chance.

“We only had two hours to fish, and while I tested out a new prototype swimbait, Ryder was throwing that jig he got from Matt on a point riddled with trees,” said Tyler Burnett. “I hear Ryder yelling, ‘dad!, dad!, dad!’ as he’s running down the bank holding this massive fish, and I knew by looking at it that she was very close to 10 pounds. After weighing her on the scale, she weighed 9.75 pounds and I gave Ryder the biggest hug and I told him how proud I was. The kid did everything by himself, and we both will never forget it the rest of our lives. We stopped in at Last Chance to see if Matt was there, but jhe was off. We told Megan the story and she was ecstatic.”

That fish stands as a new personal-best for 14-year-old Ryder whose previous P.B. went 7.4 pounds.

“The two things I’ll never forget was how hard the ‘thump’ was when I got bit, and after I swung on the fish, I couldn’t believe how big it was when it jumped,” said Ryder. “I couldn’t breathe for a minute.”

It also didn’t take long for word to get to Magnone.

“The kid’s a little hammer and his dad Tyler is a beast on the water, too,” said Magnone.

Western Outdoor News also took advantage of having Magnone on the line and had him break down the state of the largemouth stage at his home lake.

“The bite’s been very stingy for a little while, but in recent days with pre-spawn right around the corner, bigger fish are starting to move up and stage,” he said. “It’s not 20 fish a day, but in the 5 to 10 bites you may get in a day, you’re most certainly going to get some quality out of it. They key is to make every bite count. Lots of guys are struggling to get bit, but the guys that are grinding hard are getting bit. Jigs, drop-shots and Texas rigs have been the juice. If you’re in the right areas when conditions change, you might find yourself on a reaction bite on smaller bass. Look for a major change in the next few weeks because some fat ones will be showing up. Trout stock or not, it’s time to donkey hunt.”

Some striped bass were popping up in the middle of the month, mostly on flies trolled on leadcore line, but according to Magnone, there has been sporadic action for the guys dedicating time to targeting them with swimbaits, but most anglers don’t want to do that. He said the biet has been very hit and miss.

Big trout plants have been going on at the beginning of each month, and that is generally followed by a red hot bite for several days before giving way to a steady pick for a couple weeks and fair fishing before the next delivery arrives. Staffers at Diamond Valley don’t typically publish stock days, but plants in the first week of each month have been the deal all season. 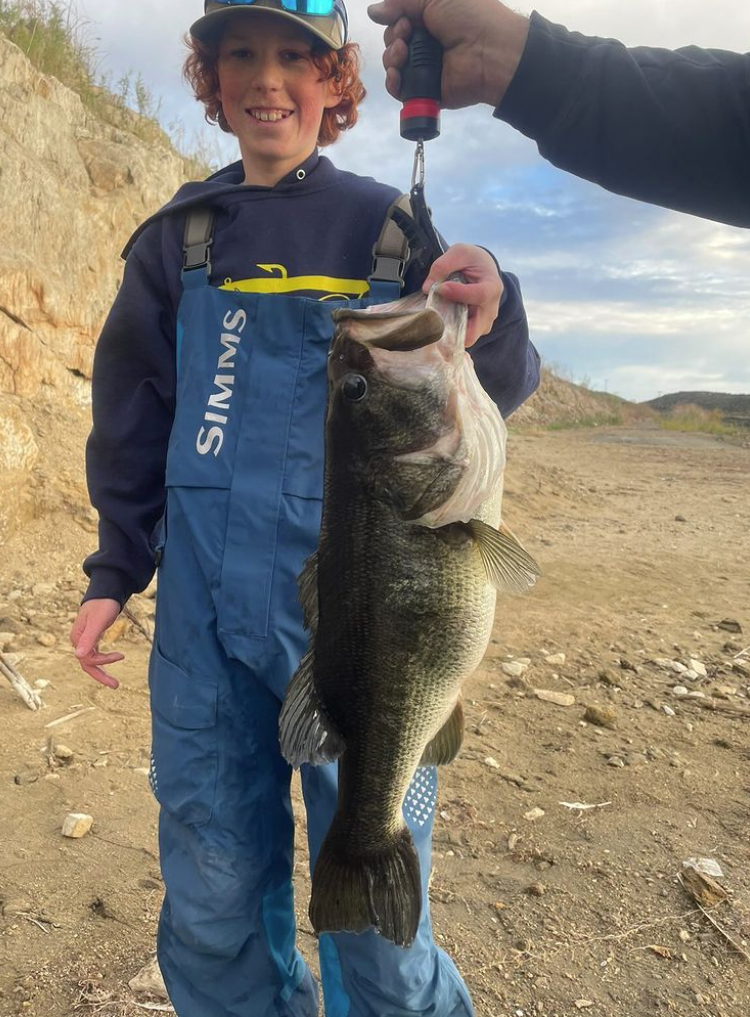