His death at 94 came after a long battle with Alzheimers; He was an award-winning writer and photographer and his columns in WON often dealt with the conservation conflicts between sportsmen and state government

Beebe died in the end stages of Alzheimers with his wife Sonya at his side in their home they lived in during their 71-year marriage.

The son of Allen and Bessie Beebe, he was born in West Los Angeles on Mar. 3, 1927. Following a brief stint in the Navy during World War II, he attended Santa Monica City College, majoring in photography as a member of its first Technical School class on that subject. A few weeks before graduation in 1947, he was offered a position at Pacific Press Photos, a Santa Monica news photo agency.

There, he was part of a three-man staff covering the entire Westside from Malibu to Redondo Beach for the five Los Angeles metropolitan newspapers: the Times, Mirror, Examiner, Daily News and Examiner, as well as the Hollywood Citizen News and the Santa Monica Evening Outlook. His photos of major news events and features also ap- peared in newspapers throughout much of the world and in such publications as Life and Time magazines, Sports Illustrated, Western Outdoors, WON and several outdoors magazines.

One of his regular assignments was to cover Gov. Earl Warren and his family in their many grunion hunting outings on Malibu beaches during their summer vacations at the Uplifters Ranch in Santa Monica Canyon. On some of those occasions, he would help the Warrens clean, fry and enjoy eating their catch.

In 1950, he was hired by the Los Angeles Mirror to cover the same area. “It was cheaper for us to hire him at $70 a week than it was to pay the $10 for his photos that we published each week,” the Mirror’s managing editor Casey Shawhan said.

During that period, Beebe covered all the Westside courts as well as breaking news events, including the disastrous Bel Air fire of Dec. 6-8, 1961, during which 486 homes and 27 other structures were destroyed. It was the worst in Los Angeles history.

In 1960, following the merger of the Times with the Mirror, Beebe was hired by the Times to cover the same beat when its reporter quit to become Los Angeles Supervisor Burton Chace’s chief field deputy. Covering President John F. Kennedy’s many visits with his brother-in-law, Peter Lawford, at his Santa Monica beachside home was a routine assignment for Beebe. One of those visits resulted in a photograph of Kennedy that has been described by many critics as the greatest photo ever taken of a U.S. President mixing with the public in such an informal event. 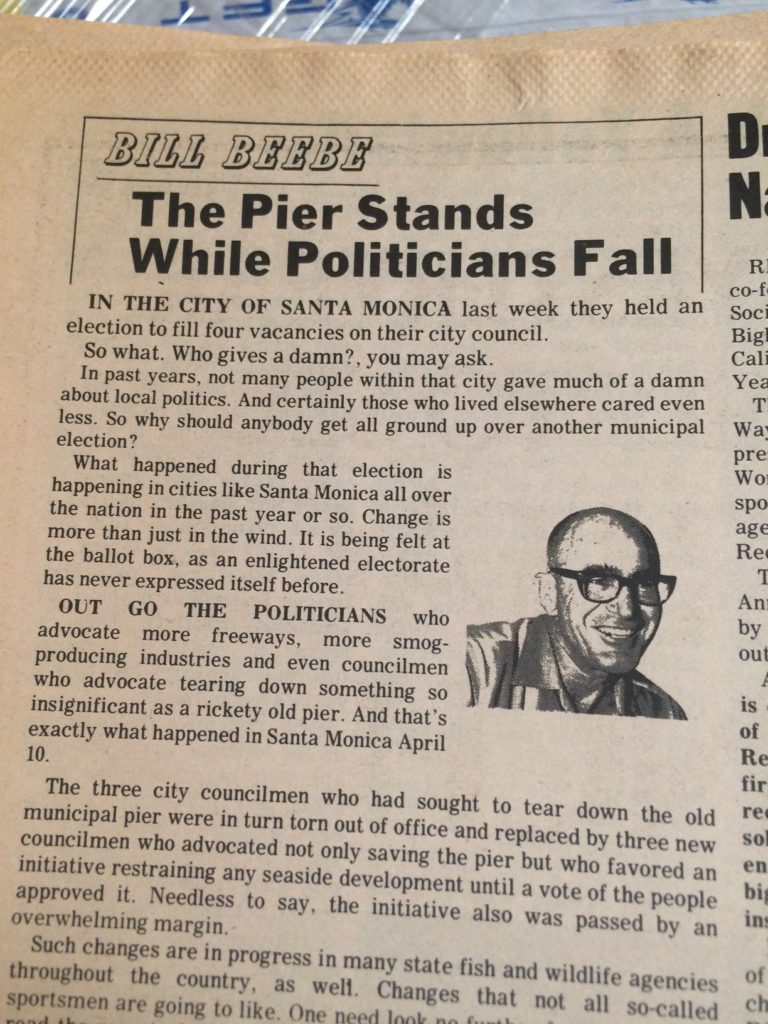 Kennedy was returning from a long swim in Santa Monica Bay on a Sunday afternoon Aug. 19, 1962, when dozens of beachgoers – some fully clothed – charged after the President as he waded the surf from his swim. Beebe, suit, tie and jacket and his trusty Rolleiflex camera, was among them.

The photograph he took of this occasion was nominated for a Pulitzer Prize by the Times. While the photo did not win that prize, it won many more, including publication in the “Best 50 Years of Life and Time” magazines. It also was awarded the best world news photo of that year by World Book Encyclopedia, and is included in the Kennedy family’s memorial of the President.

At an early age, Beebe became one of the so-called Santa Monica Pier rats, a group of youngsters who fished the pier at every opportunity.

“Jackpoles, made of 12-foot- long Calcutta bamboo imported from India, were the favored tackle us kids used in fishing the pier during the 1930s,” he recalled.

“Recent Jewish immigrants from Poland, Russia and Germany were easy customers for the big mackerel and barracuda we’d catch and sell for a nickel or a dime, or whatever we could get. Fish markets on the pier would protest to cops about selling those fish – it was illegal then as it is now to sell sport-caught fish.

“But wardens and cops usually let us off with nothing more than a warning,” Beebe recalled. “They recognized what few fish we sold had little, if any, impact on market sales. Besides, whatever money us kids made was viewed as way of contributing to our families who were having difficult times during those Depression years.”

His interest in this state’s marine fisheries and their long history of mismanagement began in the first story he wrote for the Mirror, Dec. 30, 1951, “Nemesis of the Night Poacher – the SS Marlin.” It highlighted where many $3-fee-paying recreational anglers went for the privilege of “fishing in an ocean full of free fish.”

Department of Fish and Game Capt. Robert Kaneen, the agency’s chief of patrol in Southern California, set up that nighttime ride aboard the department’s patrol vessel so that Beebe could report on how people were profiting from the illegal catch and sale of our marine resources.

“The laxity of certain judges, together with small (department) operating funds, have made this (Santa Monica Bay) area a private fishing hole for commercial fishermen,” Kaneen was quoted in that illustrated story.

In 1979, while working as the outdoors writer and editor of a weekend supplement at the Santa Monica Evening Outlook, Beebe spearheaded a five-part series in concert with the Sacramento Bee detailing the state’s declining marine fisheries brought about by heavy poaching activity. Also brought to the public’s attention was a “lax” judiciary in penalizing fishermen and fish processors in cases brought before several courts. Certain state legislators who provoked the Department of Fish and Game to subvert enforcement of commercial fishing regulations to the benefit of that industry also were brought to light in those stories.

Kaneen, who by that time had become the state’s marine resources director, was allowed to resign after those stories revealed how he interfered in prosecutions of commercial fishing cases under investigation by his wardens.

Early in Republican Assemblywoman Doris Allen’s career, Beebe introduced her to the difficulties wardens were facing in enforcing commercial fishing regulations and invited her to meet with one of those wardens at a designated location.

The meeting began at 9 p.m. Beebe said he had to leave at midnight because of an early assignment the next morning. The following day Allen called him to report what had transpired in her meeting with the warden.

“At one point,” she recalled in her discussions with the warden, “he became very emotional over the lack of support, in which he accused certain department managers of interfering in his investigations. We didn’t break up until 2:30 a.m. the next morning,” Allen noted.

As a result of the meeting, Allen became a major voice in support of the recreational fishing community in its campaign to get the Legislature to recognize the need for stricter enforcement of existing commercial fishing regulations.

In a June, 3, 1987 letter to Beebe, following her speech before 400 anglers at an awards banquet in Marina del Rey, Allen praised his efforts to bring greater public involvement on behalf of California’s natural resources.

“For many sportsmen, your articles are the only source of information they have to gauge what is happening to their resources, and to become better educated and familiar with the appropriate ways to affect change …,” Allen remarked in that letter. “I look forward to working very closely with you as we continue to pursue positive changes in the future of (these) resources,” she wrote.

Later that year, Allen introduced a bill that would outlaw use of gillnets within state waters. When it failed by one vote in the Legislature, she took this issue to the public in the form of Proposition 132. It passed by an overwhelming vote and withstood several legal assaults on the part of the commercial fishing industry. She died of cancer in November, 1999.

Bebee was the only West Coast writer ever chosen to represent the eight-member U.S. outdoor writers’ team in competition with a like number of Canadian writers in the annual Giant Bluefin Tuna Tournament at Prince Edward Island in Nova Scotia. He won that tournament with a 697-pound tuna.

He also had fished in many other parts of the world, including Mauritius, Rhodesia, South Africa, Mexico, Hawaii, Alaska, British Columbia, the Canadian Yukon and Northwest Territories and the Arctic.

In 1975 he participated in a Los Angeles Museum of Natural History expedition to Cocos Island and other Pacific coastal islands of Costa Rica.

With the passing of the owner of Pacific Press Photos, his widow gave Beebe the photo firm’s entire collection of negatives – more than 70,000 – dating from the 1930s through the mid ‘60s. He donated the entire collection to the Santa Monica Historical Society for public use, with proceeds to benefit the Society.

His personal photo collection, including the image documentation of Southern California’s recreational fisheries and wildlife, was eventually donated to the Santa Monica Historical Society.

He was a lifetime member of United Anglers of Southern California, who presented him with its annual Bill Ray Memorial Award in 1996 for his commitment to protect, restore and enhance Southern California’s marine fishery resources.

In 2007, he was elected by his peers to the California Outdoors Hall of Fame.

He is survived by Sonya, his wife of 71 years, daughter Suzann Gilliland of Fallon, Nev., son Bill Jr. and two grandchildren, Brett and Krista. No services are planned. His ashes will be spread over his favorite halibut hole in Santa Monica Bay.

Contributing to this obituary was Bill Beebe Jr. and Bill Beebe himself, who many years ago, at my request, provided much of the historical background and text for this writer.

For a lot more great info on the lifetime accomplishments of Bill Beebe, click HERE for his obituary that ran in the L.A. Times.