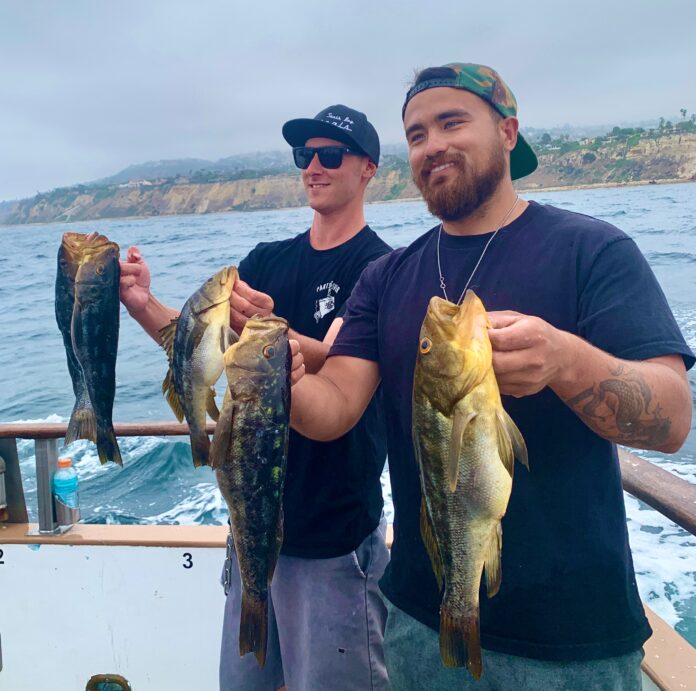 You hear the question raised all the time from those fishing for largemouth bass. “What kind of pattern are they on?” Green bass anglers look for patterns — repeatable locations, baits and techniques that can be fished in different parts of the lake, based upon what they found to be successful early in the day or on that piece of water in the past. But you rarely hear the average saltwater angler talk about patterns for catching calico bass.

If you’re on a private boat, you have more latitude in establishing patterns because you’re in control of where and when you fish. Most notable is the option of fishing very shallow, near boiler rocks, deep in kelp stringers and places that party boats can’t get to — advantage private boater.

On a party boat, you can’t control where or at what time you fish. The captain parks the boat and it’s up to you to figure out what’s going to work in that location. Since the majority of anglers fish from party boats, let’s focus on how to establish patterns in that scenario.

If the calicos are on the chew, establishing a pattern is pretty simple. During summer, which is also when calicos spawn and their appetites increase, a fly-lined live sardine or anchovy is the standard fare and works well. Not so complicated. But when the bite is picky or slows down, it’s time to put on your thinking cap and try to strategize what kind of change is needed

Every day is different and the only constant is change. For me, that’s one of the challenges that makes party boat fishing so much fun. Can I outsmart the fish? What do I have to do to reestablish a pattern? The chess match is on.

Or maybe it’s just a matter of how do you catch a “legal” calico. Close to 90 percent of the calicos being caught now are “shorts” — fish under the 14-inch minimum length. It seems like the majority of bass being caught for the last few years are 13 inchers. When are they going to add that inch to make them keepers? There should be a bonanza coming soon.

Before getting into tactics, be aware that the same considerations for establishing patterns for calicos often apply to other game fish such as bonito, barracuda and yellowtail. It’s a matter of assessing the situation and adapting to it.

Regardless of where you’re fishing, you need current. Moving water is essential to getting the bass going. Traditionally, a downhill current going into shore is best, particularly along a kelp line where the current pushes the kelp down in the water column, which also makes it easier to fly-line a bait without constantly getting caught in the kelp stringers. When the kelp is up, look for open lanes to cast to or cast to the edges of the kelp bed.

Chumming live anchovies or sardines, or cut chunks of the same or squid, can get the bass coming out of the forest and within range of your bait. As always, watch the birds and if you see larger boils from the bigger bass, try to get your bait close to that spot.

If a down-and-in current has the fish fired up, you have one element of a pattern. Look for other spots with matching current. Water temperature, water color, bait presence and tide phase are other pattern elements to look for. The more elements you can identify, the more likely you’ll be successful at other locations duplicating these pattern elements.

Most of the bass, along with the bonito and barracuda, have been keyed in on anchovies this summer. Fly-lining an anchovy takes some experience, but you can cheat by adding a 1/8- to 1/4-ounce sliding egg sinker above your hook to both cast farther and get your bait lower in the water column where the bigger bass are often lurking.

Use a longer rod with a soft tip for throwing the ‘chovy, with small number 2 light-wire hooks on 15- or 20-pound monofilament line with matching fluorocarbon leaders. That’s been a prevalent pattern so far this summer. The anchovy is heavily out-fishing the sardine.

I’ll take a day of steady action on the short bass any time. For me it’s about the action more than the size. But if your target is the keeper and larger-size calicos and you’re just catching shorts, it may be time to switch up your tactics and find a new pattern. Try a heavier sliding egg sinker, or fish a dropper loop to get down to the bottom.

Dropper loops aren’t my favorite way to fish because I like to feel the line peeling off the reel when bit on the surface, but I admit there are days when fishing deep is the answer. Again, it’s about strategizing and figuring out what to do if what you’re already doing isn’t working. If you’re fishing a structure spot like a reef or rock pile, going deep until the fish wake up to the chum can put the odds in your favor.

If the boat has live or fresh-dead squid, that can change your presentation and pattern. A 1/2- to ¾-ounce sliding egg sinker or leadhead with a long shank hook are the norm with squid. I prefer leadheads because the weight doesn’t separate from the bait and I feel the bites better. Others might say the opposite.

Recently, I was fishing on the Redondo Special, a half-day boat from Redondo Beach Sportfishing, and we were fishing for calicos with fresh-dead squid but it was a very scratchy bite. I realized I had to change something because the bite was slow and the typical pattern fizzled out. I went with a light 1/8-ounce leadhead and pinned two squid heads on, the ones with the longest tentacles I could find. Bingo! The fluttering of the tentacles as the leadhead slowly sank was the key and I’d found a new pattern. The bass inhaled it rather than just pecking at a whole squid and never getting to the hook.

Sometimes the changes to a pattern can be subtle. Last week I was fishing for calicos, bonito and barracuda at Catalina aboard the Native Sun, a 3/4-day boat from 22nd St. Landing in San Pedro. Fly-lined sardines were just feeding the sea lions but they left the anchovies alone. The bass were picking up the smaller ‘chovies but just not committing. I was waiting longer to set the hook when they ran with the bait, but still came up short-bit most of the time.

Time for some pattern tuning. Maybe it’s an old school thing, but I like to swing hard on a fish when I get bit. But that day I was just pulling the bait out of their mouths. I knew I needed to make an adjustment. Instead of swinging to set the hook, I just put the reel in gear when I felt the fish had run long enough, and when the line came tight and rod started to bend, just turned the handle. Kind of like you’d fish a circle hook. It was a difference maker and that pattern held up in multiple spots that day, and with bonito and barracuda, too.

While live bait typically out-fishes artificials, there’s nothing more fun than throwing plastic baits for calicos as far as I’m concerned. There are two primary categories of plastics: leadheads with a paddle tail or fluke-style plastics attached, and tube baits like the Hookup Baits and Mag-12.

When the boat moves to a new spot along the kelp line and the chum starts eliciting a few boils, I’m ready to fire out a 5/8-ounce Hookup Bait as soon as the anchor goes down. A pattern I’ve found is that the first 15 minutes or so is prime time for throwing the Hookup Bait. That’s not to say that it doesn’t work throughout the day — it does — but it typically gets the more aggressive fish before they start to focus on the live baits. As HUB’s company motto states: don’t blink on the sink, as probably 90 percent of your bites will come on the fall.

On that Native Sun trip, my first cast of the Hookup Bait with a Tranx 400 filled with braid and a fluoro topshot resulted in a rare backlash because the line was dry. (That’s my excuse and I’m sticking to it!). While I was trying to get the professional overrun out, I saw the line twitch as it hit bottom so I swung and just reeled up over the tangle.

Expecting it to be a bigger calico, I was surprised to see the red, white and black bands of a nice sheephead. The erratic action of these baits attracts all kinds of fish. I also recently hit the jackpot with a log-sized barracuda on the one-ounce Hookup Bait when everyone else was fishing live bait and they were chasing but not committing to the iron. It’s all about assessing the situation and adjusting your pattern.

If you’re fishing the kelp line and the stringers are down and you can fish over the top of them or there are clear open lanes, throwing a swimbait or surface iron can also produce. Sometimes they just want a different look. Recognizing opportunities like this are yet another pattern element.

While action is more important than color, changing the color of your plastic or jig can also get a few more bites. An anchovy-like fluke on a light leadhead and the A-rig or umbrella rig that typically has five small Flukes or swimbaits on it can also be effective. The A-rig has become popular with a lot of crewmembers of late and they sometimes catch multiple bass on one cast because of the way they imitate a small school of baitfish.

Generally speaking, many anglers just don’t think outside the box. They’re used to fishing in one or two ways and stick to their comfort zone. If those aren’t working they chalk it up to, “The fish just aren’t biting.” If you want to catch more fish, think about what elements are and aren’t working and adjust to the situation.

Once you identify them, you’ve established a pattern that can be replicated, either that day or on another trip. This kind of problem solving will make you a better angler, result in more hookups, and ultimately more fun on the water.