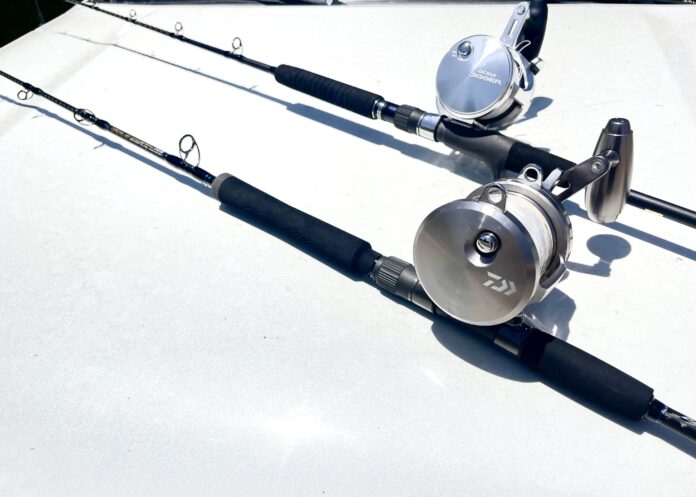 Until a few years ago, Southern California fishermen never really had local opportunities to fish 100-pound gear or heavy rail rods. Our fishery was very different seven or eight years ago and such heavy gear wasn’t necessary to target local fish offshore. Rail fishing is something unique to the West Coast and was reserved for the long trips and even longer fights in the cow yellowfin waters of the lower banks and Guadalupe.

Now, with trophy bluefin tuna residing in our own backyard, rail fishing has been something nearly every Southern Californian fisherman has had to learn quickly. The problem with rail rods, is they are designed to work best when they are on the rail. Rail rods can be completely miserable to hold on to while standing up with a big fish attached to the other end.

The other problem is that bluefin tuna, especially the trophy-sized ones, seem to have a funny habit of running away from the boat high up in the water column on the surface when hooked, making the use of the rail almost impossible. A natural adaptation among a small circle of anglers has seemingly solved the problem of what to do when big bluefin tuna want to fight standing up.

Enter “speed jigging” and all of the “new-to-us” tackle and techniques that come with it. There is a small circle of jigging fanatics that are regulars on the Southern California offshore scene. If their equipment doesn’t turn your head, their ability to consistently hook trophy class bluefin certainly will.

Working from the top down
Many of the triple-digit bluefin landed over the last few years were likely caught on the surface. So many in fact, that a boom of local six-pack charters have flourished specializing in a variety of surface techniques. Flying fish on the kite, spreader bars on the troll and casting into foamers have been the preferred methods for targeting a shot at a trophy bluefin.

Just as this fish has adapted to our waters, the Southern Californian angler is also adapting to find that there are additional opportunities to catch that fish of a lifetime many fathoms below the surface everyone has been so focused on.

What is speed jigging?
Speed jigging for big tuna — specifically bluefin and yellowfin — is nothing new in other parts of the world, but like the Pacific bluefin tuna that we target, its techniques and equipment have slowly made their ways onto sportboats and into the hands of progressive anglers looking for smarter ways to battle big fish without breaking their backs or bank accounts.

Anyone fishing offshore the last two years has heard of, seen, and likely purchased several vertical (knife) jigs, which tuna willingly bite when fished (sometimes painfully) with our traditional heavy gear. Through my own trial and error, I found that my odds of success targeting big fish increased significantly when I put speed jigging techniques and equipment into the water.

Speed jigging to the lay person presents like a sped-up version of slow-pitch jigging. The angler lifts and winds in a rhythmic fashion that causes the jig to dart upward, mimicking a fleeing baitfish. Think yo-yo fishing while jigging the rod up and down during the retrieve. The action created by the jig and the bite it triggers can be explosive.

My own experience with ditching my heavy gear for and moving into speed jigging equipment to target big bluefin has been overwhelmingly positive. It makes sense that a shorter and lighter rod can be comfortably fished all day, especially when you consider that basic vertical jigging involves dropping a 3- to 14-ounce jig hundreds of feet down into the depths, winding it up as fast as I can, and then repeating. Add the pumping up and down of speed jigging, and this can be exhausting and unsustainable with heavy gear.

Even before I ever hooked a fish, it was obvious that the biggest benefit of the shortened and lighter speed jigging rod was more time at the rail and more drops of the jig. When hooked up, the effectiveness of a shorter rod is just a matter of leverage and geometry when applying pressure on a large tuna.

The rods
Jigging rods are seeing growing availability in Southern California tackle shops right now and can be found by those who search for them. These short rods are stout, parabolic and can be as light as 9 ounces. The design of the blanks enable the angler to pull extremely hard, pushing the rod well beyond the limits of what one would think is possible.

A West Coast staple has been the Phenix Megalodon PE 4-8 and 6-10 rods in 5’6 and 6’0 lengths. Black Hole USA has also been sending some of its East Coast favorites like the Cape Cod Special, which is famous for catching a 1,000-pound Atlantic bluefin while handling nearly 60 pounds of drag. My personal favorites have been Shimano’s Game Type J and Grappler Type J.

The reels
The great news for those that are aspiring to get into speed jigging is that much like the jigs, you likely already own reels that will work for this style of jigging. Heavy drags and large line capacity are a must, and a 2-speed is a bonus. Commonly used reels for speed jigging include the Talica 16, 20 and 25, Penn Fathom 40N, Penn Torques, and the Daiwa Saltiga LD55 and LD35. More specialized jigging reels include the Shimano Ocea Jigger 4000, and rarer Jigging Master Monster Game Series reels.

The jigs
Vertical (knife) jigs are slim in profile and are able to sink quickly down into the strike zone. Colors will vary as do glow patterns. Assist hooks are typically attached to both the top and bottom via split rings and sizes vary from 150 grams all the way up to 500 grams — that’s right, just shy of a pound. The weight of the jig used largely depends on the speed of the drift, current and depth being fished at. I’ve found that jig weight has little to no correlation to fish size as I’ve personally caught 100-pound-class fish on small 150-gram jigs and seen aggressive 25-pound school-sized tuna swallow large 400-gram jigs nearly whole.

When the tuna are biting, it seems like anything will work. I’ve heard stories told of assist hooks attached to 12-ounce torpedo sinkers getting bit, but when the fishing is scratchy or just not quite wide open, everyone seems to have their favorites. A sought after local favorite jig comes from James and Mike Kikkawa’s SoCal-based West Coast Jiggerz,  known for their wildly popular KB Knife jigs.

Popular commercial brands which you can find in many tackle shops include Nomad Streakers, Majorcraft Jigpara Jigs, and the Rip Roller from Mustad.  A more exotic international offering comes from Japan-based Nature Boys, who have very limited domestic distribution. Their Swimrider and WiggleRider jigs have proven to be deadly on our bluefin tuna.

Conclusion
Better leverage, increased time at the rail and a purpose-built rod was a huge step in the right direction for my own success this offshore season. I encourage readers to take a closer look at speed jigging if they are serious about pursuing these giants, or just want to have fun catching tuna of any size.

The more I learned about speed jigging, the more I realized that it remains the worst kept secret for offshore success. Hidden in plain sight has been a small (and now fast growing) group of local anglers along with several well-known sportboat captains that have been successfully jigging trophy-class bluefin hidden in a crowd of heavy rail rods.

As pictures of tall fish caught with short rods continue to circulate online, word will get out, and I have no doubt that we will be seeing a lot more of this technique and its gear in the seasons to come.