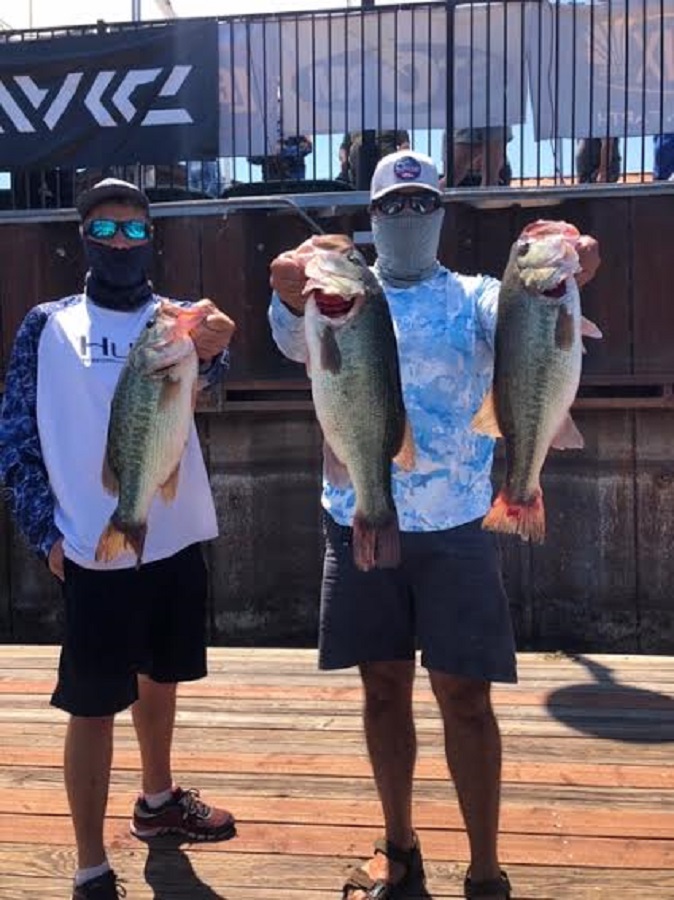 LAKEPORT, Calif. – The 2020 WON BASS California Open at Clear Lake kicked off Wednesday, July 22 with a cooler than expected daytime high of only 90 degrees. The event leaders, both from California, Steve Ericksen, of Portola, Valley and his AAA Mike Hummel, of Salinas, took a two-pound lead over the field with a first day stringer that went 27.35, anchored by a big bass at 6.67.

Ericksen had previously dialed in his area on a recent Father’s Day fishing trip.

“I was here with my dad and my brother and I found a big school of fish that has held steady for a month or so,” he shared.

“Better bites came in a window,” he explained. “I know that these areas have little feeding windows. We had a lull in the in mid to late-morning; but we stayed on it and the window would open and we would get a few more bites.”

The team’s weigh fish fell to a variety of down baits.

“We used finesse gear, bottom-bouncing baits, jigs, Texas-rigged Beavers and stuff like that,” he revealed.

Ericksen remarked how helpful his AAA was.

“He helped with culling, tagging, organization and caught a big fish (5.02) that helped a ton,” he said.

His confidence in an encore for the Day Two big stringer was dependent on boat pressure.

“I was in an early flight (Wednesday), he said.  “I have a Bass Cat Cougar. It is a fast boat: so, I was able to pass a bunch of guys in the Narrows, get to my spot and position how I wanted to. Thursday is a different story with a later flight; so, I am a little nervous with the boat traffic that I could face. I do have some back-up patterns; but they don’t have as much potential as my primary pattern. But, things change all the time; so, who knows.”

A POTENTIAL TRIPLE IN THE MAKING
Two-time California Open champ (2016, 2017), Wayne Breazeale is sitting right behind Ericksen with 25.08. Always a threat, Breazeale, a lake local, was surprised by his five-pound average.

Breazeale credited his bag to being “lucky”.

“I didn’t even practice,” he revealed. “I recently lost my fishin’ partner of 43 years and it has been a rough time. I haven’t been out on the water and I wasn’t even sure that I could fish this. But, when I was out there today, I felt like he was in the boat there with me. It was still just luck though. I know if you were ridin’ in the boat with me, you’d never think I would be in 2nd place by the end of the day.”

Breazeale and AAA Robert Tibbetts, of Susanville, claimed about 20 fish for the day – a slow day, according to Breazeale. He reported his best bite in the afternoon.

“That includes 12 to 15-inchers though; but I went through seven bags of plastics, with six to 10 baits per bag,” he said. “There’s a lot of fish, but they’re not that big right now. They’re spawned out and long and skinny. Those six, seven and eight pounders are harder to come by.”

Tosh’s big bass ate at about 11:30 a.m. He reported never really facing a lull and using a variety of baits.

For those that recall a Tosh update video on the bass Gummy Bears from the 2014 California Open, he mentioned that he hadn’t found the candy yet this year.

The California Open resumes Thursday, July 23. The three-day event will begin weigh-ins at 12 p.m. Due to COVID-19 restrictions, weigh-ins are not open to the public; however are available for viewing by live stream on the WON BASS Facebook page.