In all walks of life, it takes a mentor to provide guidance in order to develop your craft, and I have been fortunate to have found many mentors in my life. As a young nursing student, I was provided many opportunities to learn at the side of mentors who reached out to help me grow, and as a clinical nurse in the middle years of my career, I have the opportunity to help and guide others.

Fishing or hunting is no different in needing the guidance of someone who has “been there and done that,” as we can gain confidence by being closely surrounded by mentors who have infinite experience. I was fortunate to connect almost immediately with one of the original bass guides in northern California, and if you mention the nickname, “Lunker,” the immediate association is with the legendary guide, Larry Hemphill, aka “Lunker Larry.”

Over the past several years, I have developed a strong relationship with Hemphill, and he has taken the time to mentor me in the ways of largemouth, smallmouth, and spotted bass. We have been fortunate to film episodes on bass fishing at Lake Berryessa for Angler West TV, and he has wanted to put me onto a world-record spotted bass for some time. But that’s another story!

Hemphill has been fishing for largemouth, spotted, and smallmouth bass on northern California lakes since 1962 and guiding since 1981. He was also a participant in bass tournaments for 10 years and has caught and released 48 largemouth bass from 10 to 14 pounds, spotted bass to nearly 8 pounds, and smallmouth bass to 4 pounds, 14 ounces during his time on the water.

He said, “My favorite bait has always been a jig with Yamamoto trailer of some kind, and these are best in cooler waters while in warmer water conditions, the Berkley 7- or 10-inch Power Worm cannot be beat. The historic Senko may be the best overall bass bait available today, and while I like topwater action, it is rarely on. I have been blessed with many sponsors, and I first hooked up with Gary Yamamoto in 1984 when he purchased the Twin T’s Bait Company. They were one of my early sponsors in 1982 before Yamamoto bought the company. He called me up on Christmas Eve, 1984, to ask me to be the first guide in northern California to introduce his products through my bass classes and guide trips. as he had been focusing on southern California. The rest is history as the bass had never seen them.”

Hemphill continued, “I spent a number of years as a seminar speaker and taught a bass instruction class as I was a music teacher by profession. One day in 1992, I got called out of class by an ‘official sounding man’ for an important phone call, and it was Ed Rice, the owner and operator of the International Sportsmen’s Exposition at that time. Rice asked me to speak on the Bass Tank at the 1992 San Mateo Show which at that time was the biggest show in northern California. I spent the next 15 years giving seminars at both the San Mateo and Sacramento ISE shows. Over the years, I have been blessed to guide many famous persons, but one memorable trip was with Dusty Baker, then manager of the San Francisco Giants. We had a great day on Clear Lake with bass to 8 pounds, and Baker landed a 6-pound, 10-ounce largemouth, and he was thrilled.”

Although I have fished with Larry on multiple occasions, my most memorable trip came 11 months ago on April 16, 2019 when he took me out for an attempt at a world-record spotted bass at Bullards Bar. I had a premonition that I would land a trophy fish that day, and it’s funny how sometimes your gut tells you all you need to know.

We launched in the early afternoon and knowing that the water at Bullards Bar was extremely clear, I switched over to 6-pound P-Line fluorocarbon line to be as stealth as possible. The first hour of fishing resulted in multiple ‘dinks.’  And this was not what we came for so Hemphill used his experience to try some new locations without success. I spotted a tiny submerged brush pile and flipped a wacky-rigged Yamamoto Senko in green/blue shad with my Shimano Stratic C4 reel on a custom Fitzgerald rod near the bush and worked the lure through the heavy cover to find the sweet spot – Bam! What resulted was my personal-best spotted bass at 7.2 pounds on his scale that was quickly released into the clear water conditions after a few quick photos. 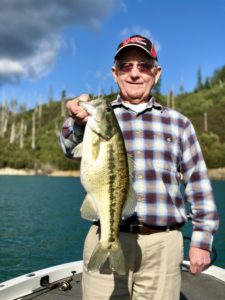 Neither of us knew that this spotted bass would smash the current world-record for women’s spotted bass until the next day when we started to research the matter. The line class record for 6-pound test is 2.4 pounds, and the overall record is just over 5 pounds. In some ways, it is possible to regret that we weren’t aware of what we had, but not weighing the fish on a certified scale and going through the process for verifying a world-record does not diminish the experience of landing a world-class spotted bass with my mentor. This was a day to remember, and it only creates more excitement to see what more is out there. We ended up with over 16 pounds for three fish as I landed another at 4 pounds on a drop-shot, and Lunker Larry put in a 5-pound, 1-ounce spot. Not a bad day for my first, but not my last, trip to Bullards Bar.

Some of us are fortunate to have mentors drop into our laps, and ‘Lunker Larry’ Hemphill has given me the gift of his years of wisdom on becoming a successful bass angler. His patient approach to instruction opened my eyes to the complex aspects of bass fishing, and I hope to always remember the lessons that he has patiently provided. I hope someday to do the same for the next generation of anglers, in particular, young female anglers.