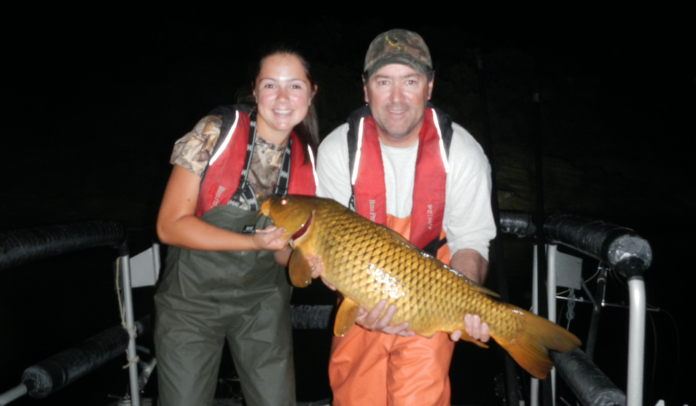 When I was a kid, my neighbor’s son decided he no longer wanted his goldfish and planned to release it in the drainage behind our house. Even at my young age, I knew he wasn’t supposed to do this, but honestly, I still wanted to see him do it.

Early on a Saturday, he hiked backed to the creek carrying a one-gallon goldfish bowl, complete with colorful fish tank gravel. With little ceremony, he knelt next to the eight-foot-wide pool and dumped the entire contents of the bowl, gravel and all, into the water. Stunned, the goldfish floated upside down motionless for a few seconds before finally righting itself and lazily swimming to the far side of the creek. That was the first time I ever saw an illegal dumping of exotic species into a native drainage.

In a lengthy fisheries biologist career, I’ve had to deal with countless reports of strange fish in native creeks. If there is one thing, I can say emphatically about each of these reported sightings, they were all the result of illegal dumping of so-called pets. And all of them either had an environmental or predatory impact on the area they were released.

While most of these releases probably seemed like the right thing to do at the time, they are far from it. Weird species that were once pets can have a pretty devastating impact on their new environment. We only have to look at Lake Davis as an example.

In the mid-1990s, California Fish and Wildlife discovered that someone had illegally released northern pike into the lake so that anglers could pursue the aggressive sportfish. Considered one of the most predatory freshwater fish in the planet, the pike began to seriously impact the world class trout fishery of the lake. Biologists also feared that pike would escape the lake to downstream tributaries and impact sport and commercial fisheries all the way to the Delta.

The Department poisoned the lake in 1997 and again 10 years later to remove the pike. Currently no new substantiated reports have been received on pike resurfacing in the lake. This effort cost millions of dollars and involved a tremendous effort in manpower. I actually assisted on the 2007 effort, and I was shocked on how many individuals were involved in conducting this eradication. All of this caused by one individual tossing a few buckets full of northern pike into the lake years prior.

Lake Davis is of course a grand example of what can go wrong when exotic, non-native fish are released into native waters, but far too frequently, what the public considers a harmless release can have devastating impacts.

Many of the releases I dealt with were clearly what we termed “Pet shop” releases – species of fish that are illegal for pet shops to sell are still sold secretly to the public to make a quick buck. Species like spotted gar, piranha and tigerfish and all listed as illegal to possess and sell, yet still the public can get them if they shop around.

Usually unfamiliar with the temperament and maximum size these species get, they decided that releasing them is the best plan of action. Not only is buying them and selling them illegal, but it’s also considered more of a crime releasing them into any water source in California.

In 2007, I received a report of exotic fish in a tertiary treated waterway in Southern California. Tertiary treated water is approved to be released as potable water into creeks and streams. This water trickled into a river where a species of endangered fish resides.

I drove out and found thousands of convict cichlids, native to Central America, living

happily in the released water. These fish are known as freshwater predators and could easily prey on the endangered species located a short distance downstream. Efforts were made to remove the fish by shutting the water off for 10 days. Unfortunately, this proved unsuccessful, and the cichlids remain there to this day.

Fortunately, this species requires a warm water environment to breed and survive. While the water coming out of the discharge is a constant 78-80 degrees and perfect for cichlids, the river water downstream dips into the 50s, and way too cold for this exotic species to survive. It seems for now, the exotic cichlids are contained within a short section of the warm water discharge.

With a picturesque bike path and city-provided park bench nearby, the cichlid area was termed an attractive nuisance, and thus an easy place for the public to dump their unwanted aquatic pets. Since the removal attempt, several other non-native species have been discovered in this section of the river. The Department, in coordination with the city, has put up signs stating that it is illegal to dump anything into the creek. Unfortunately, unless people are actually caught dumping fish, this is all we can do.

And my neighbor’s goldfish? It would be easy to shrug off the impacts of these benign little orange critters in a bowl. However, due to their limited confinement when housed in most homes, goldfish rarely get very big. However, if they’re released, they can attain a huge size, causing huge issues with water quality and decimating native aquatic vegetation.

Whether it starts as an illegally purchased aquatic pet in a pet shop, or you’ve simply outgrown your goldfish, dumping your aquatic pet in a drainage is not only illegal, but can have devasting impacts to the native species that have evolved almost no defenses to exotic predators. Whatever you do with it, it can’t be released into any waters in California.