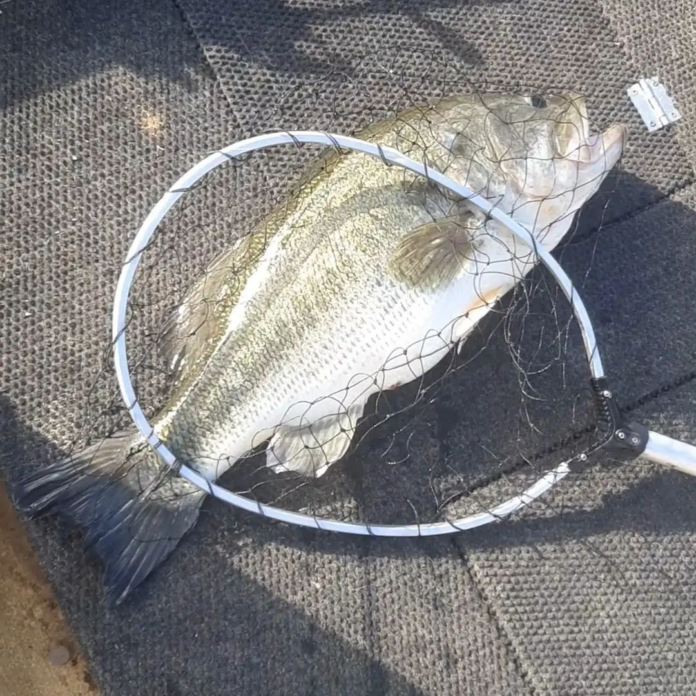 BRADLEY – Nestled into the rolling hills of the Central Coast’s wine country sits the unique bass fishery known locally as “The Dragon” because of its distinct shape and contours, Lake Nacimiento. Bucking the norm of most lakes in the southern half of the state where largemouth and/or striped bass most often dominate reservoirs’ waters farther south, Naci is unique in the fact that it boasts an entirely different bass scene altogether. Here, it is a robust and abundant population of spotted bass and large schools of roving, aggressive white bass atop the angling food chain and comprise the majority of the population.

However, largemouth too – though to a lesser degree – call Naci’s waters home, and this past week provided a legitimate reminder of that fact. A big reminder.

Philip Kwaak of Atascadero has been fishing Nacimiento consistently two to four days a week for the past two years, and all that time on the water paid off in a very big way last Tuesday. He was tossing a chatterbait when he got bit – a frequent occurrence for

many anglers this season – only to realize a few minutes later that this was no average Nacimiento bass. After considerable tussle and successfully managing to slip a small net under the fish to put it on deck revealed a rare and true lunker of a largemouth, the biggest bass Kwaak had ever seen at the lake.

“It was a breezy morning so I was drift fishing the docks and skipping a 3/8-ounce chartreuse chatterbait with a Zoom pearlescent paddle tail swimbait trailer,” he told Western Outdoor News. “She bit in 2 feet of water and the water was pretty stained that morning. After I hooked her, she almost broke me off twice, wrapping herself around two docks before I finally got her to the surface.”

On Kwaak’s scale, the 26.5-inch largemouth with an 18-inch girth would weigh in at 10.20 pounds. Later looking in on the lake record, Lake Nacimiento’s website had listed the current standing record at 9 pounds, 14 ounces. After checking in with lake staff and having them too weigh the big bass later showed an even more impressive official weight of 10.60 pounds, it undoubtedly stamped Kwaak’s double-digit largie as the new top fish on the Naci totem pole to beat moving forward. Nacimiento’s official social media pages later posted the catch recognizing the new lake record over the weekend.

“This is a huge accomplishment for me, not only for fishing being my escape from everything in life but also having the countless hours I’ve spent consistently fishing the lake these last couple years pay off with a fish like this,” Kwaak told WON. “She was released to make another person’s day like it did for me. All I can say is follow the shad!”

While Kwaak’s record largemouth rightfully stole the spotlight this week, Naci’s spotted and white bass continue to chew aggressively as they have seemingly all summer long. The abundance of shad in the lake combined with consistent conditions and water temps are making for good and steady fishing on just about any shad imitation offering. And if you can find any bird activity, get ready for some fast action.

“Finding birds working the shad has been almost guaranteed bites, and usually lots of ‘em, if you can work anywhere near the area without spooking them or running them over,” said WON Field Reporter Rich Lingor. “Just about anything that looks like a baitfish

will get you your share of bites, but lately I’ve been having some really good days just swimming spoons around any bird or bait activity – just let it sink to the bottom and winding through it. You can run into really good stuff just sub-surface, or full-on boils up top, which makes for some fun topwater opportunities at times. But just about any type of reaction bait will work right now. Just pick your confidence reaction bait and start chucking it around anywhere you notice some (bird or bait) activity.”

Lingor added that it’s been pretty much a 65/35 ratio of white to spotted bass in his catch the last few weeks, and that if you can find the right school of the active white bass it can be nearly a bite every cast. Working worms during rare lulls in the bite or during the meat of the day has also been working for decent numbers of spotted bass. Both species are averaging in the 1- to 2-pound range with a fair number of kicker fish to 3-plus. A weekend club tournament was won by another local angler, Tucker Mount, with a 5-fish stringer of spots going 12.04 pounds backed by a 3.03-pound big fish.

But certainly, the primary takeaway from this past week is that there are some true and legitimate trophy green bass still meandering in Nacimiento’s waters. And there is now a new sheriff swimming in town, and she goes by the name of 10.6 – coming to a shallow bank or spawning flat near you, likely even a little bit chubbier, in spring of 2023.