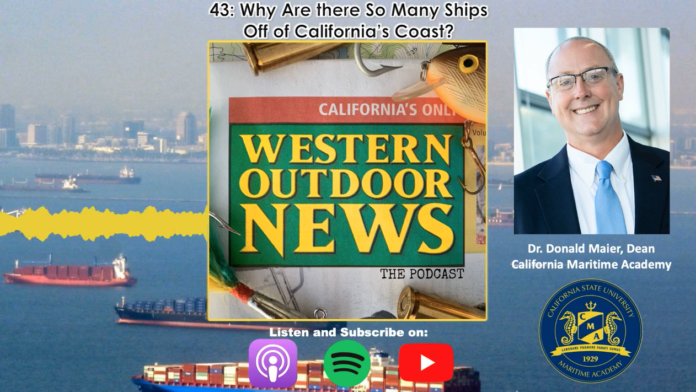 LISTEN to the interview in episode 43 of the WON Podcast:

LONG BEACH — Container ships have become part of the ocean views from L.A. and Orange counties, and theories of why they’re out there range from reasonable to ridiculous. On the latest Western Outdoor News podcast, Brad Van Zyl and Mike Stevens spoke with Dr. Donald Maier, the Dean of Maritime Transportation, Logistics, & Management at Cal Maritime to get to the real answer behind the supply chain issues, and why we are seeing so many ships off the Coast.

Here are some highlights in Q&A form, but you’re going to want to listen to the full podcast at wonews.com/podcast or wherever you get your podcasts.

Why are there so many ships off the California coast right now?

The biggest reason goes all the way back to April of last year when basically the nation and the entire world shutdown their economies. As soon as we were working from home, we were taking our disposable income and buying. Instead of going out and buying what we needed, we were getting it from Amazon. You had the closure, then you had the inventory levels drop, then companies had to hurry up and replenish their shelves while at the same time dealing with a significant increase in consumer demand.

Then, by the time we started getting to the point of stabilized inventory levels, we got to the Christmas shopping season of last year which starts in October, and then in January it was the Chinese New Year which basically shuts down Asia where a lot of our goods come from. From that point, we actually started to see an increase in our inventory levels and a reduction of the number of ships at port, especially in L.A./Long Beach back in March. Then we started to see Covid rear its head again, especially in Asia where many of their large ports had to shut down for two weeks which gave L.A./Long Beach chance to catch up. But, it’s just like a valve, as soon as you open that valve that water is flushing, so when they opened back up their ports, all of those ships that were waiting to come to the U.S. took off right away, and then they had more coming in.

That’s really what we ran into throughout the summer, then in order to prepare for the Christmas shopping season this year, the Christmas shipping season started in early August, so now all of those goods are coming into the U.S. It’s a domino effect.

The supply chain is a whole system. Imagine a funnel and you’re putting a lot of water in at the top, but you’re only going to get a little coming out of the bottom. So even though L.A./Long Beach is backed up with a lot of container ships, you have trains trying to get out of the ports and truck drivers pulling containers out, and some of the terminals those containers are going to are backed up, too.

So, in simplest terms why are there so many ships off Long Beach, a lot of it is impacted by consumer demand which was also impacted by a lot of unforeseen variables such as weather, COVID, we had a tsunami hit Asia, Texas got hit with the snowstorm last year. All of those factors really hit the supply chain.

Could you give a rough estimate of when things will return to close to normal?

Presuming that everything moves the way it’s going right now my forecast would be this time next year or January 2023. Hopefully we can get COVID under control, it’s possible by July of next year, but my guess though is by this time next year.

Is it primarily container ships that are causing this?

Yes and no. Everyone is relating it to container ships, but essentially that’s not the case. All types of ships are backed up. It’s similar to an interstate traffic system or at an airport where all the different aircraft are coming in, but they only can allow a certain amount to come in at any one time. Plus, all the different types of vessels don’t use the same terminals. A container ship is going to need a certain type of terminal where it can be unloaded and loaded with large cranes. A tanker vessel needs a different type of system. For the most part, we don’t see that, and the majority of the ships anchored off the coast are a variety of different ships, not all container ships.

What’s the typical wait time for a ship coming into the port?

Right now we are looking at vessels that are tied up or anchored offshore for anywhere from 7 to 10 days. There’s a lot of focus on L.A./Long Beach, but again, so many different factors are hitting that bottleneck right now.

How is this affecting other harbors on the West Coast?

Oakland and Seattle are the other two large container terminals on the West Coast, and again, it goes back to the type of port that it is and the equipment that is available. Oakland has a lot of the types of cranes for unloading the container ships. Not every size ship can fit in every terminal, so that’s been part of the challenge. The ships that come in to L.A./Long Beach may not fit at some of the other ports. The other challenge is, because of contracts between each port as well as the shipping lines, they’re basically tied to a contract that says their ships will go to Long Beach before they can be transferred to somewhere else. So it’s not like, they’re going to divert the ship into a different port.

What action has been taken to ease this backup of ships?

While we always talk about L.A./Long Beach as one large entity, but they are two separate ports so they will operate a little bit differently. In L.A. Harbor, they’ve talked about 24-hour operations, but you have to be careful when you look at some of the details. The Port of L.A. will operate their cranes in (I believe) a 12-hour basis, but they’re going to keep the gates open for 24 hours. So if I’m a truck driver, that means I have access to the containers on a 24-hour basis and I can get in and out quicker and more often. That will give the port essentially a little more space to offload inbound containers or they have more space to bring more empty containers back in to be reloaded back on to the container ship and back out to Asia to be reloaded. Long Beach has done the same thing.

Also, the metropolitan areas of L.A. and Long Beach are allowing truck drivers to place their chassis and containers in different bleed-off areas, some of the container yards have been allowed to increase their stack height which gives them a little more space to take in some of that additional capacity.

The other big piece that most people forget to talk about is that the Long Beach container terminal is also an automated terminal. So they can unload and reload much more efficiently than some of the other terminals that are operated by physical labor.

How can this be prevented from happening again?

I don’t think any of this could have been prevented when it all started. Nobody forecasted that Covid would hit, and when it did hit, I don’t think the world really expected what the impact was going to be. Literally everybody shut down, and then nobody expected that the consumer demand was going to be as high as it was. Nor did we expect it was going to take this long just to get ourselves back to open the economy back up, so when we opened up that valve again here comes all of that water, and our infrastructure and supply-chain system isn’t prepared for it. You can only put so many trains on a track or ships in a port at any one given time. Even though you’re moving as fast as you can, you’re at your theoretical capacity of operating, yet you still have a higher demand coming in behind it. Going forward, if this should happen again I think we are a little more prepared.

Dr. Donald Maier, the Dean of Maritime Transportation, Logistics, & Management (MTLM) at the California Maritime Academy. Cal Maritime is a 4-year university and part of the Cal State University system with a student body of about 900, so it’s small but very focused. Because of that focus, they are able to take their resources and apply them directly to various smaller, more-specialized programs. Cal Maritime’s programs also include shoreside programs including things like international business and logistics and oceanography, and it has 25 vessels in its own fleet. The academy boasts over a 90 percent job placement rate within 60 days of graduation from the marine transportation and logistics program.