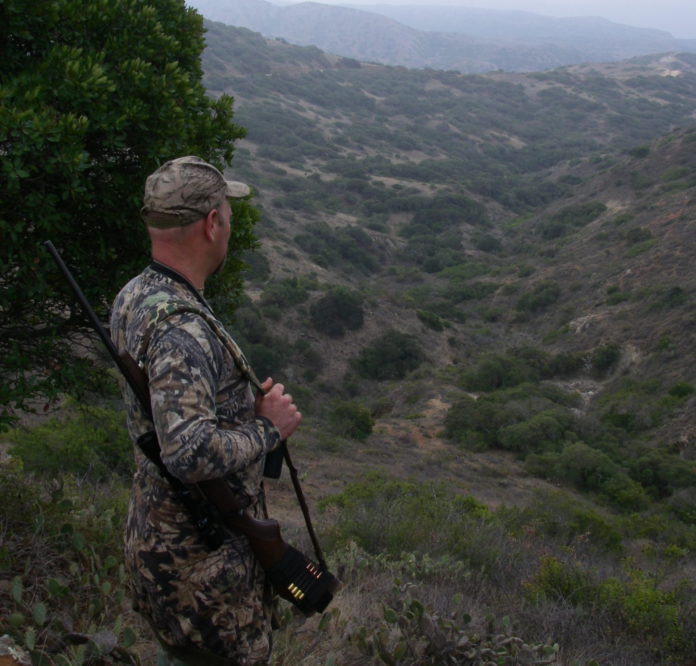 AVALON — When I was a kid, I used to listen to my grandfather talk about hunting the coastal islands off southern California. He was a ranch hand for a cattle rancher on Catalina Island in the 1940s and after the work was done, he’d meat hunt for pig and deer. Those hunts occurred long before I was around, but when he talked about his time hiking the islands, I hung on his every word. Even before I knew where the island was located, I wanted to hike those same hills with a rifle, just like my grandfather had.

Unfortunately, my grandfather’s hunting days and the onset of my hunting interest never overlapped, and I was never able to hunt with him. But I never forgot those island stories.

A few years ago, my good friend Eric Frandsen called me asking if I was interested in going on a doe hunt. He was putting together a small group to hunt with a guide service that worked with the California Department of Fish and Wildlife. The outfit was responsible for assisting in the control of the introduced deer population on Catalina Island. I was so lost in the excitement of going on a hunt that I almost missed the location of the event.

Mule deer were first introduced to Catalina Island in the 1930s by the Los Angeles County Forestry Department. In the absence of any predators, the deer have propagated unchecked for over 80 years. Even with an annual deer harvest to assist in controlling the numbers, at the time of our hunt, the island had a population of close to 2,400 animals. And thanks to my friend Eric, I was finally going to hunt the same island my grandfather had.

Ben Myhre of Wildlife West picked us up at the Avalon Harbor and drove us to a house in Avalon for our stay. After we filled out the required paperwork and traded our California deer tags for Island tags, we headed out to hunt the late afternoon.

During the drive, Ben pointed out points of interest on the island and actually eased up right next to one of the iconic island bison grazing next to the dirt road. Once we left the populated town, it was like we went back in time. Much of the interior portion of the island is relatively unchanged since it was heavily grazed during my grandpa’s time. As I took it all in, I knew he had hiked these same hills looking for deer before I was born. 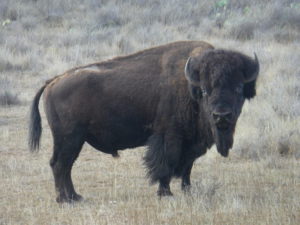 Ben pulled to the end of the road and looked back to me and Eric. He asked us how we wanted to hunt this evening. Eric and I have always hunted hard the entire time we’ve known each other and despite this being a guided hunt, we were thrilled to hear that Ben would allow us to hike the terrain ourselves looking for deer. He told us to hike through the surrounding hills and meet him down at the bottom of the road at sundown. Eric and I grabbed our gear and watched Ben drive off.

We decided to hike to a good vantage point and glass the deep ridges that dropped to the bright blue Pacific. The surrounding terrain was made up of rocky ridges, brush filled canyons and open plateaus; essentially perfect deer habitat.

Eric and I sat in silence glassing the west end of the island. The weather was perfect and despite the conditions and the cool air coming off the ocean, we hadn’t spotted any deer after an hour. Since we had about 2 hours of daylight left, we decided to start towards our pick up spot. We grabbed our gear and started the two mile hike.

A mile from our glassing spot we hiked to the top of a ridge and took a break. In the shallow valley below us was thick brush that was already in the late afternoon shadows. We had each dropped our packs, searching for water when something in the valley below began quickly leaving its brushy bed. 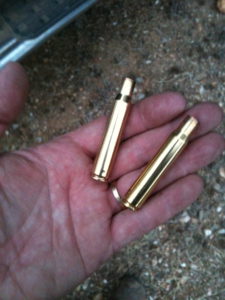 Two full grown does busted loose from the shallow valley below us. They hopped to the edge of the adjacent ridge, trotted to a stop and then looked back towards us. It had taken the pair 20 seconds to reach their current lookout spot. The last ten seconds of that, Eric and I had watched the deer move up the hill through our scopes. With time obviously limited, I guessed the distance at 140 yards and steadied the crosshairs behind the deer’s leg. “Are you on?” I asked. “Yep!” was the response.

The shots echoed through the canyon below as one and then two deer fell where they last stood. After the shot, I looked over at Eric. His approving smile and subtle nod said it all. Our first Catalina Island deer were down.

It took us nearly 30 minutes to get to where the animals dropped. Once there, I noticed Ben’s truck driving up the frontage road. Fifteen minutes after we arrived on the scene, Ben showed up with a meat pack on his back and a smile on his face. “Easiest guiding I’ve ever done!” he said, as he dropped his gear near the deer. 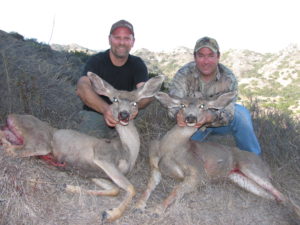 We took a few photos, field dressed both deer and dragged them down to the truck. Ben drove us to the processing area and Eric and I spent the evening dressing out our deer. We shared ice-cold beers and good company with Ben and the rest of our party. After we cleaned up, I walked to the edge of the compound and looked up to the night sky completely littered with stars. I tipped the last of my beer towards the sky and toasted my grandpa.

The following day Eric and I filled our second doe tags, and our party left the island filling every tag we had. As the Catalina Express exited the harbor, headed back towards the mainland, I looked back towards the rugged island jutting out of the bright blue Pacific and knew I’d be back.