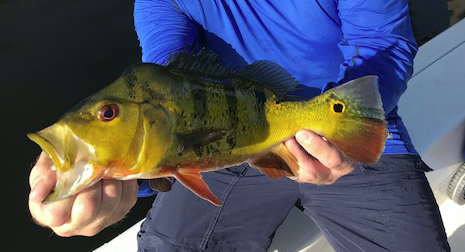 I should start off with the fact this took place in the mid ‘90s, but while you’re here, you may as well keep reading. A conversation in the Western Outdoor News office reminded me of this unique experience when my role in the sportfishing industry was in its infancy.

I was working in Bob’s Bait and Tackle in Escondido which, for obvious reasons, had the pulse of all things fishing at Dixon Lake and neighboring Lake Wohlford via the customer base. The first reported sightings of a peacock bass in Dixon Lake came from some skater kids who also liked to fish, and to a lesser extent, hang around the tackle shop primarily to see if anything new was dumped into the bargain bin. They told tall tales of seeing a peacock bass taking swipes at their Rapalas, or just cruising the shoreline of the lake that arguably boasts the clearest water of all the lakes in San Diego County.

The reasons I gave for doubting them ranged from “you’re probably mistaking a largemouth for a peacock, which is an honest mistake” to a friendly “you punks wouldn’t know a peacock bass if one jumped out of your mom’s freezer the next time you reached for a Hot Pocket.”

This went on for a couple weeks. Then some other customers with increasing levels of angling cred started showing up following alleged peacock sightings of their own.

What on earth was going on up there?

Despite thinking I knew everything about fishing (and everything else) at age 19, I now realize how little consideration I gave to “bucket biology” and how it can lead to anything short of catching a northern pike at the 9 Mile Bank landing within the realm of possibility. All the illegal act of bucketing live fish from one body of water to another meant to me was it was the primary reason behind ponds, decorative fountains and golf-course water hazards becoming “fisheries.”

This was all going down around the dawn of the Internet, at least, just prior to the point it became much of a tool for anglers when fishing message boards became all the rage. While dock talk was as alive and kicking as it is today and was a century ago, it got to the point the same chatter coming from so many different anglers over the course of a few weeks made me think there might actually be something to this.

A quick call from the shop to the ranger station revealed little more than the fact rangers were aware of the peacock bass buzz. They were in no position to confirm or deny, but it was a phone call from Dixon Lake to Bob’s Bait and Tackle that confirmed the rumors were true. The fish had finally been caught.

Over the phone, a Dixon ranger told me their dock attendant started seeing the peacock bass hanging out under the boats. He tried a few lures before sending down a nightcrawler that ultimately closed the deal. The best part was, they still had it alive in a cooler full of water.

I bolted out of the store and shot up to Dixon, because after all that, I had to see it. “Yep, that’s a peacock bass alright.” About 12 inches long, vertical bars on point, knot head and the dead-giveaway black spot on the tail. I assume a recent parolee after time served in an aquarium it outgrew.

I don’t remember what transpired that lead what happened next, but the short version is they didn’t know what to do with it, so it ended up in the shiner tank in the back room of the tackle shop.

At that point it became a tourist attraction. People would come by the shop just to see the rare Escondido peacock pass hanging out in a bathtub-sized tank full of doomed shiners. I likened it to Jaws 3 (I figure at least 7 of you saw that monstrosity) when they had the world’s only great white shark in captivity at Sea World and tourists were lining up to see it sitting there in shame in a glorified above-ground-pool.

Eventually, the shark caved under its own humiliation and rolled over putting an end to that particular attraction. Likewise, turns out a fish native to the Amazon that flourishes in all its invasive glory in Florida canals wasn’t going to be very happy in the chilly water of a backroom bait tank. It looked miserable in there, and it would find its next home in one of the ponds on the property owned by the guy who supplied us with those shiners.

An 8-year-old clings to the belief his hamster is living out its golden years on a farm with all sorts of new animal friends rather than decomposing in a cigar box in a shallow, unmarked grave in the backyard. I similarly cultivated the idea of the Dixon Lake peacock bass living the dream teeing off on shiners, crawdads and whatever other easy targets its live-bait dealing owner would toss into its cushy new living arrangement.

I figured it definitely grew well into the teens, and the only drama it would experience was when its adopted daddy would allow visiting grandkids to chuck a Heddon Super Spook out there and ride the lightning. A small price to pay.