SHELTER COVE – Rockfish trips were possible on days when the weather and seas allowed. Sea Hawk Sportfishing scored high counts of quality rockfish, even fishing locally. Rockfish were easy, but lingcod played hard to get.

EUREKA — The winds and seas were a mess and boats didn’t go outside of Humboldt Bay. In the northern part of the Bay, California halibut came to gaff for skiff fishers and kayakers alike. Live bait was difficult to come by, so jigs and swimbaits were popular. Jetty fishing was reported to be good for black rockfish, sea trout and cabezon. No lingcod catches were reported, which is unusual.

FORT BRAGG — Rockfish, dominated by huge vermilion to 8 pounds comprised most of the catch for Fort Bragg anglers fishing on boats like Sea Hawk. Mendocino put out the biggest rockfish, but other hotspots were Casper and Cleone, depending upon the weather. Shore fishers during windy rough weeks like this one hunkered down at Noyo Jetty for rockfish, kelp greenling, cabezon and lingcod, or they fished Dog Park for various surf perches.

BODEGA BAY — There was still a possibility of late season salmon, as evidenced by 3 fish to 17 pounds that came aboard New Sea Angler after loading up on limits of jumbo rockfish and lingcod down off Point Reyes. Tomales Bay halibut kept the show alive with catches up near the mouth of the Bay. Surf fishers caught striped bass at Dillon Beach and found good perch action at Dillon, Beach, Ten Mile Beach and Doran Beach.

SAN PABLO BAY — Striped bass fishing was wild, pretty much anywhere in the southern half and both ends of San Pablo Bay. At the east end, Napa River and the Vallejo Waterfront were productive. In Loch Lomond Marina at the west end of the Bay, people were tossing handfuls of chum and watching stripers flash excitedly. There were limits taken by numerous boaters and shore fishers alike.

SAN FRANCISCO BAY – Rockfish and lingcod trips were popular and boats like California Dawn, Pacific Dream, Bass Tub and Salty Lady courted limits of both rockfish and lingcod from the Farallon Islands. Salmon were still to be found and New Rayann hit almost a fish per rod. Halibut fishing in Central Bay was good and at Angel Island one skiff angler using live bait manages 3 keeper white seabass.

HALF MOON BAY — Queen of Hearts, Huli Cat and New Captain Pete put in their time fishing rockfish and lingcod, sticking with deeper water from 160 to 220 feet to get into bigger concentrations of reds, coppers and browns. Productive destinations were the Ritz Carleton, Martins Beach and San Gregorio. Coastside net pen salmon kept anglers at it inside Pillar Point Harbor where the big fish would occasionally bite flossing rigs.

SANTA CRUZ – Anchovies moved inshore and fishing perked up for halibut, striped bass, lingcod and rockfish. Private and rental boaters scored good numbers at local reefs or sandy areas south of town. Party and charter boats including Miss Beth trekked up the coast to fish rockfish near Davenport or farther up near Franklin Point where lingcod to 22 pounds were taken.

MOSS LANDING – Local halibut fishing gave private boaters something fun to do while waiting for the November 7 opener of Dungeness season. Bounce-balling was effective for halibut in 40 to 80 feet of water. Some boaters opted to drift with frozen squid or use jacksmelt and kingfish they jigged up. Local beaches in both directions from Moss Landing were very good for barred surf perch. Above town the chances for a striped bass rose appreciably. 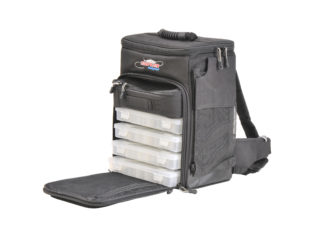 Paul Lebowitz - May 13, 2020
0
Like any SKB product, the Tak-Pak Backpack Tackle System means business. This is a serious, well thought out tackle bag with backpack straps, basically... 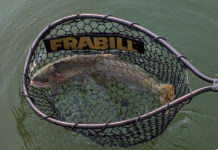 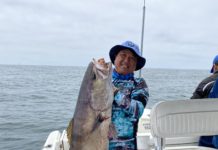 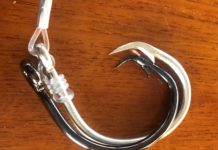 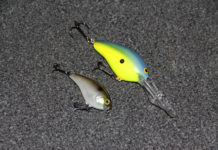