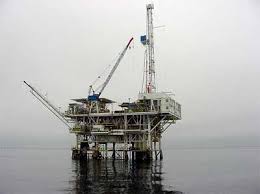 By Merit McCrea
There are 3 offshore platforms and an oil island on the short list for decommissioning and several more that have been already torn out. I’ve already covered the process piece for those on the list, but not much about fishing, and diving the places themselves. There are some greats here.

These are all in the Santa Barbara Channel. Farthest east on the teardown list is platform Gail. I’ll follow the oil platform terminology introduced in prior weeks in this series, rather than start from scratch.

Gail is a big 2×4 approximately 150 feet by 300 feet at the surface. Standing in 740 feet of water, with a 7-degree spread in the legs, it’s roughly 330 by 580 feet at the bottom. It’s the largest of those on the decommissioning short list.

She’s in the east end of the Santa Barbara Channel, due north of Anacapa Island and halfway between Ventura and Santa Cruz Island. She has 25 conductors/wells on her east end and upper levels at 40 and 100 feet.

That upper level holds lots of marine growth, but is cleaned periodically, so the major scallop sector starts below there. Fairly far offshore, there are calico bass but not the huge numbers seen on some platforms closer to the coast.

The usual mix of blacksmith and perches flit between the structure’s legs there too, along with some sheephead. For what it lacks in bass, it makes up for in rockfish at deeper depths. And it has been shown to be a major rockfish nursery at that 100-foot level.

Some summers there are many, many thousands of baby rockfish amongst the crossbeams and conductors. Down deep, some major bottom monsters lurk. Out in over 100 fathoms, this rig has been off limits to bottom biter baiting for almost 2 decades.

We’ve surveyed the jacket from top to bottom seasonally in years past. Other scientific work includes some of the first deep water barotrauma work. The Chris Lowe Lab (CalState University Long Beach) tagged a few fish, less than 10, with pinger tags in 2004 an

most survived. The following seasons I worked with them to tag dozens more.

Some of these Kim Anthony, then a grad student at Cal Sate Long Beach with Lowe, moved to Anacapa Island and released. Several swam right back. One lingcod stayed at Gail all year, then went missing for several days, only to return. In the meantime, it had pinged a pair of the Pfleger Institute of Environmental Research’s receivers out at Cavern Point, Santa Cruz Island. This was a remarkable testament to the fish’s mobility and navigation.

We at the Milton Love Lab deployed an Acoustic Doppler Current Profiler there for a season. It looked at water flow in the upper 100 feet. Dr. Mary Nishimoto found the biggest numbers of baby rockfish came when the current flowed into the Channel from the southeast.

Three pipelines connect platform Gail to platform Grace, a little more than 5 miles northwest. In 310 feet of water and 10 miles offshore this platform also has similar fish and invertebrate populations to Gail, yet perhaps a few more of the warmer water shallow species.

At the bottom the bigger rockfish lurked but they were mostly “steamer sized” at 1.5 to 2 pounds. Reds were the most common I recall. Kim Anthony, with the Lowe Lab, tagged and trans-located those too, and had fish make it back from Anacapa. Those that were released there tended to stay there. A few even showed up Gail on their way back to Grace I understand.

Rincon Oil Island is along the coast off Mussel Shoals, between Rincon and Pitas points. This manmade island has a boat landing and a half-mile long, one-lane bridge to it. Surrounded by big rock riprap and fronted by what looks like giant concrete jacks, this island is a reported lobster heaven.

Yet the area it’s in is known for its murky waters. Natural reefs run the bottom to the northwest of it and flank the down-coast shallows a few hundred yards southeast. It’s in about 45 feet of water and would make a great public fishing spot.

The little island itself is roughly 400 feet by 400 feet. State Lands is in charge of the decommissioning project and has just completed plugging its old wells. The environmental process, which gathers public comment on what to do with it is just about to start up.

It’s time to keep an eye open for the public meeting notices and be ready to put in a bid for sport fishing.

Farther up coast are the sites of the “4-H” platforms, removed in 1996. These were premier calico bass fishing sites in the years leading up to their removal. We’d anchor up-current to the conductor sides and cast into the structure with live bait and hang on! You had to be quick to wind them out of there.

Sometimes the bass would be so thick the huge school would swarm the boat and you could see them by the hundreds in the water, wide-open bite.

We’ve since reconned those sites to see what was left — the shell mound. What we found was a sad situation — some low lying plumping, dust-covered old mussel shells and a few small rockfish.

We’re not sure but it seems perhaps the shell mound just melts and settles over time so plumbing previously buried becomes exposed.

We found the sites of past platforms Helen and Herman — up off the Gaviota Coast and dove those too in the past few months. Each was reported cleared of debris at the time but today show a low lying jungle gym of pipes and such crisscrossed along the bottom, with a few shell crumbs lying about.

Herman was epic for bass fishing back in the late ’80s — some of the most wide-open bass bites I’ve ever seen.

Currently starting the process of plugging and abandonment of its 30 wells, platform Holly is just off Coal Oil Point near U.C. Santa Barbara. In 216 feet of water, it’s in the middle of a vast area of natural oil seeps. It seems, since ceasing production after the Refugio Spill from a ruptured pipeline ashore, some 11 miles up coast, the natural seepage has increased markedly as oil and gas bearing formations below have slowly recharged pressure in the surrounding strata.

Along the west edge of this platform the water is filled with bubbles of natural gas and oil. That’s just a tiny fraction of what comes up from the many fissures in the surrounding waters.

We’ve surveyed this platform’s fishes many times over the years, top to bottom and tested out our invertebrate survey methods here as they were developed. The closest platform to UCSB and having an ideal dive layout, it’s served as our survey methods testing ground over the years.

One fall I surveyed one of the seafloor seep vents in the Delta submarine. As we pulled up, there was a cauldron, a huge crater in the seafloor large enough to swallow the sub. It was maybe 20 feet across and too deep to see the bottom. Crabs had lined up along its edge, some rockfish too. The crabs looked stoned just sitting there, and a few looked like they’d stayed so long they’d starved and died.

As far as fishing Holly, it can be picky to pretty good — mostly half-day grade rockfish. But back in 1975 a bunch of bocaccio had moved in, pretty nice ones of 2 to 5 pounds. It was wide open. I heard a commercial hook and line boat from Ventura came up and whacked it hard and the bonanza was over.

Aside from the oil smell and sticky mess at the surface, platform Holly is a pretty dive — very colorful with good visibility — 15 feet to over 100. The current tends to be fairly strong but workable. It flows from the east here.

Merit McCrea is saltwater editor for Western Outdoor News. A veteran Southern California party boat captain, he is a marine research scientist with the Dr. Milton Love Lab at the University of California at Santa Barbara’s Marine Science Institute. He can be reached at: merit@wonews.com.

We hope you enjoyed this article on our no-charge website wonews.com. Of course, this site contains only a small fraction of the stories that Western Outdoor Publications produces each week in its two northern and southern editions and its special supplements. You can subscribe to the print issue that is mailed weekly and includes the easy flip-page full-color digital issues, or you can purchase a digital only subscription. Click here to see the choice.