RED BLUFF – The salmon season is now in full swing for most of the Sacramento River. The fishing remains very good in the upper stretches of the river, and limits are now being taken as far down as metropolitan Sac. The fish have moved up into the American and are spread all the way up to Nimbus. A few more fish have trickled up the Feather and despite the low water, there have been some taken by both the boats and bank anglers. If you can get beach access on the main Sacramento River near some of the deeper holes, the odds are that you will probably be able to get into fish. If you can’t get onto the upper river, consider Discovery Park on the mouth of the American or farther up the American now that the fish have moved up there. The salmon bite has been great, the steelhead bite is starting to ramp up and trout are now feeding on the salmon spawn.

Pete Franco of PF Guide Service has had a great season so far this year, but has seen a slight dip in the salmon numbers. With tough conditions on the lower river, many of the boats concentrated on the upper stretches and pressure has been high. He’s seeing an average of a fish per rod, with limits still on most of his trips. The fish are quality but there have been some darker, more mature males in the mix. He continues to pull Brad’s Plugs in the Ord Bend stretch of the river. Water conditions are good with water temperatures at 62 degrees.

Rob Reimers of Rustic Rob’s Guide Service has been fishing the Butte City to Ord Bend section of the river as well. He’s been taking fish at over 20 pounds most of the week. He’s seen a bit of a hole in the run and will keep an eye on things before he moves further south.

Kirk Portocarrero of Sac River Guide Service has been seeing a great mix of both salmon and steelhead. He’s been fishing the Ball’s Ferry section of the Sacramento and is still getting limits. He continues to land big fish and said, “These fish are the biggest that I’ve seen in years!” He has been splitting his trips and is fishing salmon early morning and then steelhead midday. This week, Lori Lares from Susanville landed a beautiful 9-pound steelhead during one of the afternoon trips. The steelhead fishing should only get better as the salmon spawn gets going and they steelhead start feeding on the eggs.

Jon Kenyon from “Fish On with Jon” has been fishing the Barge Hole canyon and is still slamming them using Pautzke eggs or Flatfish. He reported the fishing has been very good throughout this whole section of the river and is seeing limits of good quality fish on most trips. 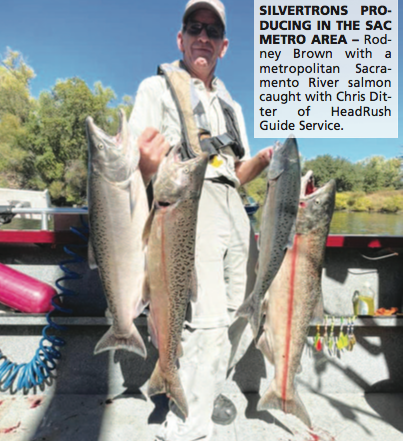 Shannon Engh of the Fly Shop in Redding reported that the egg bite is just starting to kick off as more salmon move into the upper stretches of the river to spawn. The guides are still seeing good fish on stonefly, caddis and Rs2 Pmd’s when the bugs hatch but are now switching over to egg patterns and will be fishing those more regularly throughout the remaining season.

Jeff Goodwin of Jeff Goodwin’s Guide Service said, “The 2021 Sacramento River salmon just keep coming, and by the looks of the things, it’s going to continue through December with our late fall kings this year. Most years we will see a significant slowdown in the Corning area around the third week of September, but we’re seeing some new salmon still showing daily down there. That’s a good indicator of what is to come for us in the Anderson area over the next few weeks. Lots of Kings have already moved up into Battle Creek from the Barge Hole and are making their way into Coleman Fish Hatchery where staff there will be beginning their egg take early next week. The Coleman Hatchery is open to the public during the salmon spawning season.”

John Boitano of Phil’s Propellers in Redding reported fishing around Redding has been superb, and bank anglers fishing the ‘Gravel Bar’ below Battle Creek have started to see regular limits with most fish now being caught flossing bead-corky combinations on 6-foot leaders with 1.5- tp 2-ounce of weight. Good quality fish are being taken along the whole length of the bar. Juan Gonzalez and Walter Vialoboz were fishing there Wednesday and both had limits to nearly 30 pounds.

Michael Reimann of Johnson’s Bait and Tackle in Yuba City reported that many of the guides are still running north, but a few have started to report fish being taken around Tisdale trolling Silvertron double-bladed spinners. The fish reported around Knight’s Landing last week got hammered once that word got out and most have now fled north. The temperature there is warm at about 67 degrees. In the Feather River, the Outlet Hole is starting to show a few more fish with one or two being caught from the bank and by drift boats or other shallow runners. Flossing has started to work from the bank, but trolling Flatfish or drifting roe has been slow for boaters.

The ramp above the hole is the best access point due to low water. The fish quality is mixed, there are a few chromers, but many of the fish are already cooked from the long hot run.

Leo Salcido at Sacramento Pro Tackle reported that the salmon fishing has kicked off from Freeport to the mouth of the American and recently the fish have spread throughout the American as well. Sand Cove and the Sherwood Marina have been busy with plenty of anglers as well as salmon in the

mix. The boats that have been trolling Flatfish or drifting roe have been doing better than those on the anchor. Fish have been holding closer to the banks and trolling in that zone has been working well. Spinners such as Flying C’s have been working from the bank.

Chris Ditter of HeadRush Guide Service has been finding more and more salmon in the metropolitan area trolling double-bladed Silvertrons or Brad Cut Plugs filled with tuna behind the new Brad’s 360 dodger.