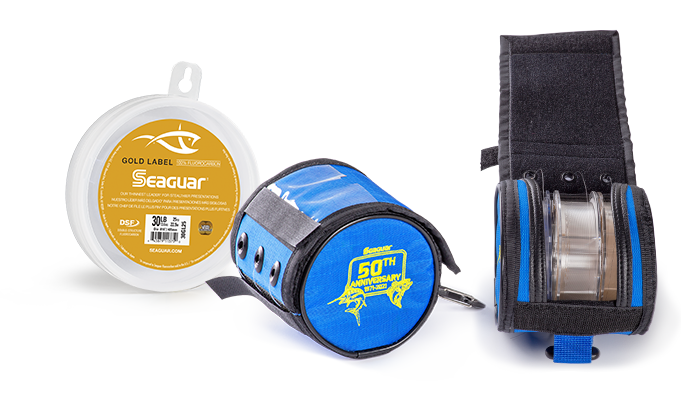 In 2021, Seaguar, the world leader in fluorocarbon line and leader material, is marking the 50th-anniversary of its founding and the invention of fluorocarbon fishing line with a fun angler photo contest.

To celebrate, the company has created the “50 Big Ones” photo promotion where anglers are invited to submit their favorite fish photo taken from 1971-2021. When visiting the contest site at www.winseaguar.com , anglers can also vote on photos they believe deserve special recognition. 50 winners will receive a 50th Anniversary commemorative Leader Spool Management Bag filled with three spools of Gold Label Leader.

The contest runs from February 1, 2021 through May 31st, 2021. It is open to residents of the US, 18 years and older. To enter the contest or read the complete contest rules, visit winseaguar.com.

Read on to learn more about the history and story of Seaguar ….
In 1966, two employees of Kureha, a Japan based chemical company and parent company of Seaguar, noticed that the attributes of Fluorocarbon were ideally suited to fishing line. Nylon monofilament dominated the market at that time, but the two catalogued fluorocarbon’s advantages versus mono including absorbing less water, impervious to UV rays, high-density and nearly invisible underwater. Their hunch proved true…that fluorocarbon would revolutionize fishing line and so the two men applie 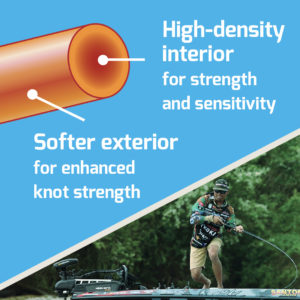 d for a patent, which was granted and registered in 1969.

Like most breakthroughs, it took several years of trial and error…of success and failures before a product would be ready to market. The company had mastered the process of extracting only the highest-caliber Fluorocarbon crystal from which the leader and line resin is derived and it would be several years, however, before they succeeded in extruding the resin properly to create Fluorocarbon fishing line that met the performance traits desired. During that time several experiments and tests were conducted along the way to verify the properties and benefits of Fluorocarbon vs. other fishing line products. These milestones kept the project alive and advancing.

Finally, in 1971 with manufacturing quality standards established and production technology and equipment put in place, a new factory began extrusion and producing Seaguar Fluorocarbon Fishing Line. It was first introduced to the Japanese market and launched to USA saltwater anglers in the early 1980’s. Anglers were impressed by its properties including less visibility underwater and the fact that it sinks faster allowing baits to get in the strike zone faster.

A company dedicated to continuous innovation.
Since then, Seaguar has innovated and advanced the quality of its offerings in many ways. One of the first improvements over the 1970’s version of Fluorocarbon fishing line was how to improve knot strength for Leader and Tippet applications. Seaguar engineers decided it would be quite difficult to improve on knot strength without changing the structure of the line and they did not want to compromise the benefits that had been achieved thus far. The solution took shape in a new revolutionary process called double structure. This creates a line comprised of two different resins but still resulting in a single structure, impossible to separate, made exclusively with 100% Seaguar produced Fluorocarbon resin and Seaguar managed extrusion processes, with all the same qualities of Seaguar’s single structure line and more.

The only problem with the double structure concept was that the two resin formulation and structure made extrusion, a difficult process, much more difficult. It would not be until 1983, with the contribution of an improved extrusion process, that Seaguar introduced double structure fluorocarbon lines and leaders that now include Gold Label, Fluoro Premier™ and Blue Label leader material as well as Tatsu® mainline. Seaguar’s Double Structure Technology provides a core 100% Seaguar Fluorocarbon resin that is harder, and an outer 100% Seaguar Fluorocarbon resin that is softer for to make the line soft and supple and to allow knots to cinch easily.

The next focus in Fluorocarbon advancement was improvement in abrasion resistance. The R&D Team championed the task and, with the expertise earned through so many previous years spent developing formulations, succeeded in creating a new Fluorocarbon resin that would maintain current performance expectations yet better withstand heavy cover. The result was the introduction of AbrazX, a line designed for heavy cover and lab tested to be twice as abrasion resistant as competing Fluorocarbon brands.

Seaguar continues to create products that make a difference to anglers all over the world.
And since we are the only fluorocarbon company that makes its own fluoro resins and controls the process from start to finish, we’re uniquely able to develop lines with high-performance features to help anglers catch more fish.

We’re humbled by the trust the industry has put in our brand and our products. There are lots of line options, but to know that anglers have made Seaguar the #1 brand of fluorocarbon by choice makes us both thankful and proud.

So as we look back at the past 50 years of growth and look forward to the next 50, our gratitude for your support and confidence is deep. Nothing is more important than continuing our mission of creating lines and leaders that are Always the Best.