POINT LOMA – Seaguar stands as the originators of 100 percent fluorocarbon fishing line, and as it turns out, the pioneers and foremost authority on all things fluoro still make the best stuff. As a sponsor of the inaugural WON California Tuna Jackpot (Aug. 8), Seaguar will be providing assortments of their high-end fluoro as raffle prizes.

Seaguar’s saltwater family of fluorocarbon is grouped into five categories based on application, so anglers can get their hands on the exactly material to specifically fit their needs.

Among them is the new gold standard in fluoro leader: Seaguar Gold Label, which is available in 15- through 40-pound test. Unveiled at the 2018 ICAST Show, it quickly made a name for itself last year when it got in the hands of West Coast anglers who immediately took advantage of it’s thin diameter (thinnest ever made for that matter) and even loftier knot and tensile strength than anything else on the market. Even when sporting such high marks in those categories, Seaguar Gold Label handles exceptionally well, it has very low memory and it clinches into flawless knots with ease.

For top-notch abrasion resistance and impact strength, anglers all over the world have been reaching for Seaguar Blue Label 100 percent fluoro for some time now. Part of its international appeal lies in the fact it’s available in a gaudy range of sizes (2- to 80-pound test) meaning there isn’t a fishing application on Earth Blue Label can’t perform in.

Seaguar Fluoro Premier is another one that matches up smaller diameters with low memory and elite-level strength, and it comes in 12- to 80-pound test and 25 and 50-yard spools.

Those three products were built with Seaguar’s Double Structure Fluorocarbon (DSF) process which is based on combining fluorocarbon resins to create leader with thin diameter while maintaining strength. These leaders really give the angler the advantage when target fish are bite shy and the most natural presentation of bait or lure makes the difference.

Rouding out Seaguar’s vast arsenal of saltwater fluoro is the higher-visibility (better control) Pink Label (15- to 80-pound) and the bang-for-your-buck Red Label (20- to 80-pound) which covers a wide range of applications in an abrasion resistant but soft and sensitive (with some stretch) package.

Tips, knot guides and frequently asked questions are available on Seaguar.com for your reading and viewing pleasure. 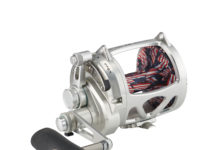 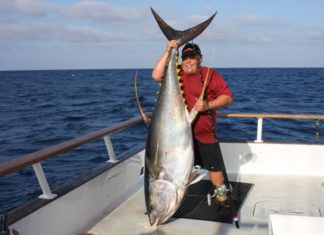 Long range then and now

Paul Lebowitz - June 17, 2020
0
BY GARY GILLINGHAM I have been long range fishing for about 25 years now. I was very lucky. When I started all the Revillagigedo Islands... 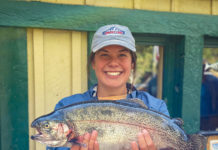 Eastern Sierra: The haves and have nots! 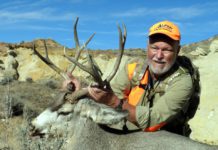 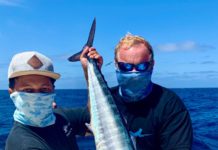 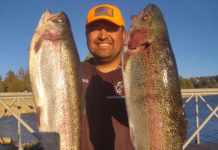 TroutfesT 2019 champion returns midweek after tourney to have yet another...