After its introduction in Japan and popularity on the East Coast, slow-pitch jigging is just now beginning to emerge in western Pacific waters. Many local slow-pitch fishermen just getting into the technique are mostly targeting bottom dwellers like rockfish, lingcod and the occasional halibut. Globally, slow-pitch jigging takes place almost exclusively in deep water.

While the concept of depth can be a subjective and regional idea, in general, deep water in the slow-pitch jigging world means 300 to 600 feet, and here on the West Coast it’s around 250 to 400 feet to the ocean floor when near shore. My own interest in slow-pitch jigging remains centered around its effectiveness when conditions change or fishing gets tough on bigger gamefish. Many times I have watched a yellowtail swim past my surface iron or decline to blow up on an appetizing sardine being presented in front of them. I thought, there has to be a better way…

My recent late July/early August trip to Isla Cedros in Baja Mexico presented a very good opportunity to experiment in shallower waters targeting big gamefish with this technique. Having taken this trip once before in 2015, I knew we would be fishing water ranging from 20 to 120 feet in depth in waters full of hungry yellowtail. This time around I was after the lesser known, more coveted, and much more elusive fish of the island – the white seabass and black seabass.

Note: Black seabass are very abundant and thriving in Mexican waters. These fish are open to both commercial and sportfishing in Mexico unlike in U.S. waters, where these fish are required to be quickly and safely released when caught incidentally.

Weather on the water…

“Lluvia!” (Spanish for rain) exclaimed Bush, my pangero, as he pointed to the dark skies and wall of clouds directly south of us. Bad weather and tough fishing are not something you typically hear about from anglers when they speak of their experiences at Isla Cedros, but we were about to get to experience both on the morning of our second full day fishing at the island.

As the rain began to fall, I felt grateful that we were fishing on the one panga (named Fish and Chips) on the island that had a custom pilot house design. I was too warm for my rain gear, so it was nice to stay relatively dry inside while everyone else fishing around us scrambled to put on their jackets. With questionable weather on top of us, all of the pangas met up and stuck together while the storm passed over us.

The rain was heavy but came and went quickly, taking the morning’s hot surface iron bite on yellowtail along with it. Radio chatter indicated that the slow-trolling mackerel was no longer producing consistently either. Now with variable weather and fishing conditions, the entire panga fleet was fishing close together.

This safety in numbers was reassuring far away from the island, but the small armada would now be putting an immense amount of pressure into a relatively small area of underwater kelp/structure that was holding calico bass, and previously, yellowtail.

When things get tough

Feeling the pressure and proximity of the other boats, our captain indicated he wanted to resume slow trolling and look around a bit. What he did not know is that I came to Cedros specifically for an opportunity to fish in the scenario that was playing out before us – slow-pitch jigging, in shallow water, ideally, when things became tougher.

“No Bait…- Quiero Yo-Yo!” I said to him, which got me a smile as he pulled the boat out of gear and we began our first drift. Assuming the storm had disrupted surface activity, I reached for my slow-pitch rod and went to work. Fishing a 180-gram Daiwa Mr. Slow jig in 140 feet of water, I was getting bit by aggressive calico bass that were suspended about 20 feet off the bottom.

If I could get through the bass, I thought, I may have a shot at gamefish that were likely cruising on the seafloor after the storm. I focused most of my efforts between the bottom and 5 to 7 cranks above it, slowly pitching my jig to get a good dart/flutter/fall action in my target zone. The action I was creating would mimic a dying baitfish and hopefully trigger a reaction strike from something bigger nearby.

Back on the bite 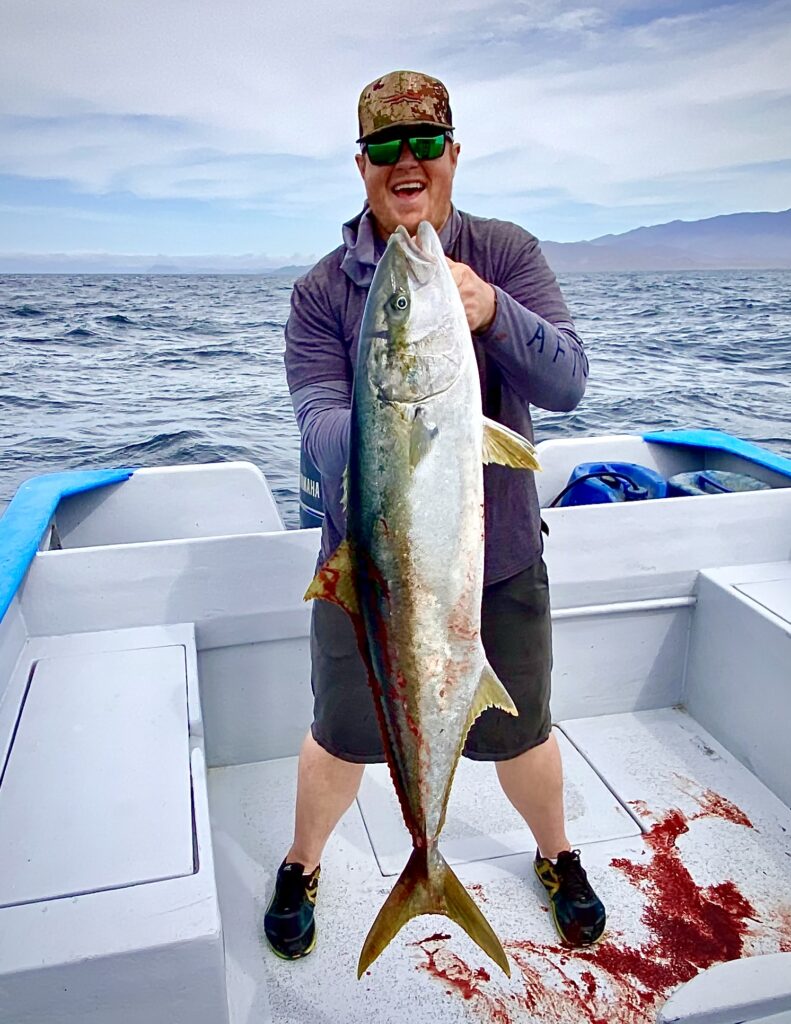 My first big bite came on the third drop down, and the fight was on. When a big fish begins pulling drag, most people will instinctually belt the rod or stick it into their hip to pull up and gain some leverage. When hooked up on slow-pitch gear the best leverage comes from tucking the rear grip of the rod into your underarm, palming your reel and playing the fish from there, similar to a freshwater bass fisherman.

Slow-pitch jigging rods have a softer tip that are designed to maximize the action of the jig via recoil and whip, not necessarily fight the fish. Your reel will do most of the work during the fight and getting cranks in, even pointing the rod down at the water will bring your fish to the boat the fastest. While I know this goes against conventional wisdom, it simply works.

After its first run, this fish took me immediately into the hidden kelp underwater and its headshakes felt much more violent and erratic than the yellowtail we had been catching earlier that morning. With each crank of my reel, my fish came 46 inches closer to the boat. Assuming it was a big yellowtail my captain anxiously waited at my side with his short gaff.

Aside from the wildly popular yellowtail, there were two other fish I was targeting with slow-pitch jigging during my visit at Cedros, and at this point I was fairly sure what I had hooked up was one of them. After some hard pulling I was able to get it out of the kelp and eventually bring it to gaff. To my captain’s surprise it was not the yellowtail we had been chasing, but a very respectable white seabass. The first white seabass of the 2022 Cedros season, I later was told.

We continued our drifts over the same area. My theory that the bigger gamefish had balled up after the bad weather and were laying on the bottom like firewood had been a correct one. Unlike yo-yoing, which works a jig rapidly up and down the entire water column, slow-pitch jigging allowed me to focus my efforts on a specific target area, which in this case was the bottom 30 feet of the water column.

Two more drifts yielded 2 very respectable yellowtail. My fourth and final stand-out fish after two hours of repeated drifts and countless calico bass later was a 75-pound black seabass that slammed my jig on the pitch and took a blistering run that would make a bluefin tuna blush.

Farfetched as it sounds, not only did slow-pitch jigging in shallow water get me back on the bite after some bad weather shut it down, but it also connected me with a white seabass, a black seabass, two yellowtail and countless calicos, all in the same morning. Coming back into the port later that afternoon, it was obvious that we had a very special day on the water. There is no doubt in my mind that the unconventional and endlessly versatile approach of slow-pitch jigging played a huge part of it. My Spanish wasn’t good enough to ask if anyone had ever caught all four of those species in a single day on a jig, but I suspect it’s a very short list of people.

Special thanks to Jose of Cedros Outdoor Adventures for continuing to operate one of the most unique and action-packed sportfishing experiences in the world, and also to our pangero Captain “Bush” for keeping us safe and on top of the action out there.

WON has a sold-out travel trip scheduled for Cedros Island in early September. Look for a full story on that trip to the epic Mexican fishing island next month.