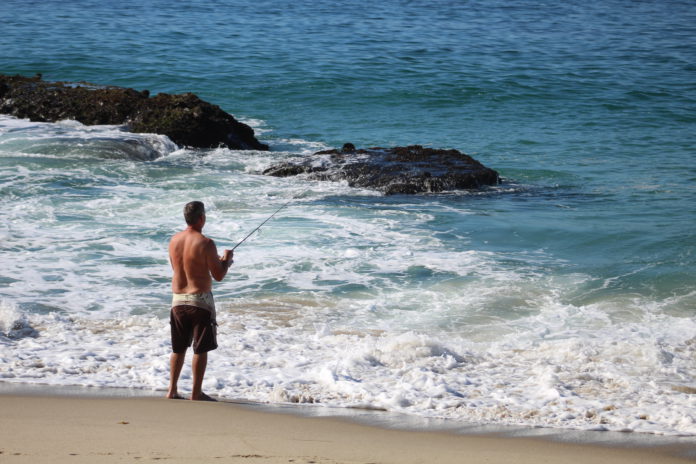 SANTA BARBARA — A big drop in water temperatures significantly slowed the bite on most species, according to Hook, Line and Sinker. A best bet was the barred perch fishing which held up despite the cooler water. The fish were mostly on the smaller side with a few kickers over a pound. Good catches were reported from Gaviota, Carpinteria and Silverstrand. Natural baits like lugworms and mussel have been tough to beat but a few anglers are scoring limits with Carolina rigged grubs or Gulp! Sandworms. As temperatures stabilize look for more good perch fishing with more quality fish showing in the catches. Anglers soaking squid on the reefed beaches reported cool water species in the catch. One angler scored a mix of Johnnie bass, chocolate rockfish, short calico bass and a cabezon. The halibut bite at Goleta slowed with just a few short fish reported. One legal fish was taken on cut anchovy at the harbor mouth.

MALIBU – A big slowdown this week with water temperatures dropping, reported Wylies. A few anglers got out and scratched away at catches. A best bet was the perch fishing on the more northern beaches. A catch of smaller perch was reported taken below Mugu on shrimp and cut squid. Another catch was taken off 5th Street in Oxnard on shrimp. Other anglers have been getting bites on Gulp! Sandworms in the bloody color and motor oil and root beer colored grubs. Along with the barred perch, good numbers of smaller yellowfin croakers have also been in the mix. Most of the perch have been under a pound with a few better kickers pushing 1 ½ pounds. A few halibut catches were reported on Malibu beaches, but no legal-size fish were checked in. The cool water didn’t affect the sharks as anglers reported hooking several leopard sharks this week.

REDONDO BEACH — Cold water put an end to the corbina bite on South Bay beaches according to Just Fishing. Cool water in the mid-50s put the fish down. The better bet was the barred perch fishing. Anglers found limit fishing on smaller fish with the occasional kicker over a pound. The grub bite has been good with clear/red flake and root beer colored grubs getting bites. The stretch near the Hermosa Pier has been a good place to look. Most spots were holding good perch numbers this week. Halibut anglers scratched at mostly short fish in the cooler water. The bait moved off the beach and the fish have been scattered. One 23-inch fish was taken in the harbor on a piece of cut anchovy. The bonito also disappeared in the cooler water. They may return when the water stabilizes. PV anglers scratched at a few smaller yellowfin croaker and the occasional small bass. The fish took cut squid fished on the bottom.

SEAL BEACH – Cold water ushered in winter-style fishing this week, according to Big Fish. Anglers scratched to get a bite. The barred perch bite was a best bet with anglers reporting lots of smaller fish in the surf line. Catches were reported from Sunset and Bolsa Chica beaches. Lugworms and mussel have been top baits. Most fish have been ranging from ½- to ¾-pound. Some smaller yellowfin croaker were also in the mix. Halibut anglers struggled to find bites in the cooler water. A few short fish were taken off Shoreline Drive on small plastics. One legal fish was taken off the 72nd Place jetty on a piece of cut anchovy. Look for the halibut bite to improve as water temperatures stabilize. Seal Beach Pier anglers reported catches of smaller perches and a few yellowfin croakers. The schools of bonito inside the breakwater moved out with changing conditions. Few fish were reported this week.

NEWPORT BEACH – Cold water changed the face of the bite, reported Ketcham Tackle. The corbina moved off the beach and the bonito largely disappeared. Anglers found the barred perch fishing a best bet this week. The fish have been smaller, but most anglers are reporting limit or near-limit fishing. Grubs, Gulp! Sandworms and lugworms have been the top baits. A few smaller yellowfin croaker were also in the mix. Halibut anglers struggled to find biters on the beaches. The shock of the temperature drop put the fish in the negative mode. One 25-inch fish was taken at the harbor mouth on a piece of cut anchovy fished off the jetty. The fish was taken in the deeper water in the main channel. The bay bass bite inside the harbor was also slowed by the cool water.

DANA POINT — Cold water pushed the bite into a wintertime mode, according to Hogan’s. Anglers had to work to get a bite. A best bet was the barred perch bite off South Laguna, Strands and Salt Creek. Most of the fish were smaller but biting well. Limit or near limit fishing was the norm. Most of the fish ranged from silver dollar size to hand size with a few better kickers. Gulp! Sandworms and grubs have been the top artificials. Lugworms and mussel have been the best baits. The best bites have been two hours before the high tide and two hours after the high. A few shiner perch and smaller yellowfin croaker have also been in the mix. No corbina catches were reported in the cold water. Halibut anglers scratched at a few bites on mostly short fish. The big cold water drop scattered the fish. One legal fish was taken off the end of the short jetty at the harbor opening. The 22-inch fish took a whole anchovy fished with a trap hook.

OCEANSIDE — With cold water slowing the bite on the open beaches, anglers turned to the lagoons for a decent bite on halibut. The bait bite has been best with cut anchovy or sardine and live smelt working well. Targeting the main channels near the lagoon mouths, the bite has been best on the stronger tide movements. The fish have been ranging from short to 26 inches. A few yellowfin croaker, sand bass, and spotted bay bass have also been in the mix. The best bite on the beaches has been a mix of barred perch and shiner perch. Most of the barred perch have been around the ½-pound mark with a few better kickers. The good bonito bite off the Oceanside Pier came to an end with the influx of cooler water. Pier anglers scratched at a few smaller perches and a handful of mackerel.

SOLANA BEACH — With the corbina largely gone, beach anglers turned to fishing for smaller barred perch. Mission Beach was a better spot with catches also reported from Torrey Pines and Del Mar. Motor oil and clear/ red flake grubs have been a top artificial. Gulp! Sandworms have also been working well. The bait bite has also been good with lugworms and cut squid producing. Most fish are ranging from palm-size to hand size with a few better kickers. Halibut anglers struggled to find bites on the beaches. The bait has moved off the beach and the halibut have scattered. A few fish were taken at the lagoon mouths and at the mouth of Mission Bay on cut bait. Fishing the main channels on the strong tide movements has been the best tactic. As temperatures stabilize and bait schools return, the halibut bite should rebound.