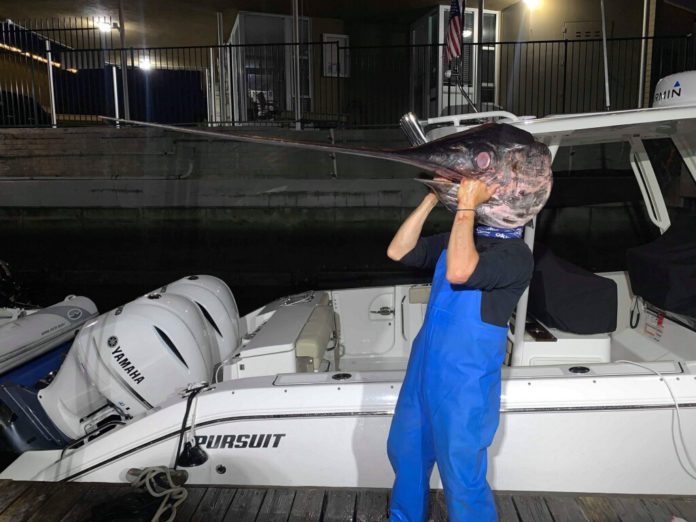 AS TOLD TO PAUL LEBOWITZ

Serge Vasquez of Expert Marine has been chasing swords for months, usually by himself for the ultimate angling challenge. He’d experienced some hook-ups, the most memorable a monster fish he fought for 6 hours, most of it live on Facebook, before the hook pulled at leader.

He was undeterred, and the next weekend was back at his quest for a solo swordfish aboard the 25-foot Monterey cabin cruiser he’s owned since 2002. He was somewhere between Catalina and the mainland with his baits deployed about 1,000 feet into the depths. Here’s his story:

I was thinking about relocating when I noticed a big double whack on the tip rod, two big strikes. I put the boat in gear and started motoring forward when the rod went slack, confirmation I had a fish on.

I got settled in and started to bump up the drag and load the rod up more on the fish. At some point I sensed an opportunity to clear that second rod. I grabbed my power drill and Speedy Crank and reeled in the buoy setup. The tuna clip that attaches the weight to a waxed loop wasn’t where I left it, it was about a foot up and wrapped six times around the main line. All the time I’m looking back at the rod with the fish, a Phenix Black Diamond hybrid 700X3, to see how much line was still on the reel, an Okuma Makaira 16.

It took a while to figure out, and I was wondering how it was possible. Later, after talking with a friend who is more experienced at catching swordfish I realized the sword got to the weight and started whacking the heck out of it. They attack anything they see. So many things could have happened…

I finally got the buoy rod stowed, cleared the deck, put the cooler in the cabin, and repositioned the boat. I picked up the rod with the fish and added more drag and started reeling and it went on a big run back down to 1,000 feet.

We got up and down and settled in for the fight. At times I fought the fish stand-up with no harness and gained a lot of line that way. When my left arm tired from holding the rod I put it back in the holder. My dog “Lucy” helped keep my spirits up.

After 90 minutes I got the sword to the leader and unclipped my weight and my two lights. The fish surfaced behind the boat. I caught a glimpse, it was a nice sword but not nearly as big as the one I’d lost. That gave me more confidence; it didn’t freak me out.

At one point the fish started closing the gap to the boat and swam towards the starboard side. I thought this might be my opportunity. I grabbed a big flying gaff and reached as deep into the water as I could. I felt it make a solid connection with the fish. I cleated the rope off and sank a second flying gaff into the fish and cleated that off. I couldn’t believe what had just happened.

I was totally consumed with emotion, I couldn’t believe I had landed one on my boat. Solo! It was a surreal moment.

I tail roped the fish and used my pulley system to get the fish 80 percent on my swim step so I could get the boat onto plane. I was stoked I’d done everything start to finish myself, including my own rigging. I’d tied my own leaders, poured my own lead sinkers, made my own crimps, rigged my own squid and did it start to finish. It was an awesome achievement.

Back at the Balboa Angling Club, where there were 20 people waiting for me, I guessed the fish weighed 220 pounds. Once the read off the weight — 335 pounds! — I was blown away. I had to reflect on the one I’d lost. I’ve been wracking my brain trying to put a weight on that other fish. I have to say it was close to 500.

It’s been a long hard road to catch a swordfish. I did a bunch of research and talked with many people and finally made it happen. I can’t believe I’m not living a dream now, I’ve been eating, sleeping and breathing swords, I was consumed by it. I had full-blown purple fever, there wasn’t a moment that went by that I was thinking about how to better my rig and fish two lines efficiently.

Serge Vasquez is sponsored by Phenix Rods, Okuma and Ahcor Offshore, and owns his own business, Expert Marine Electronics.