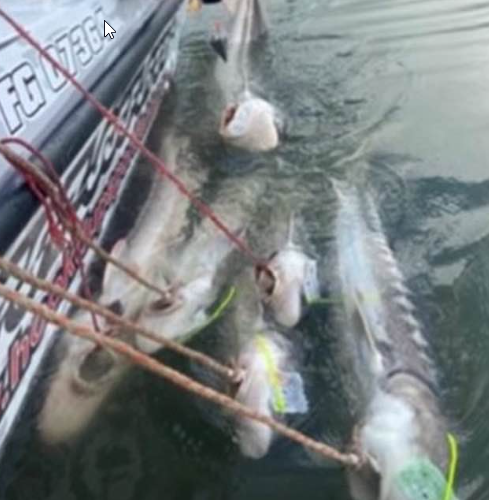 As the idiom goes, it’s too late to close the barn door when the horse has bolted, and this is the question as we look into the current situation with the take of white sturgeon in the California Delta.

Fishermen are extremely reluctant to regulate themselves, and we don’t have to look any farther than historical photographs of steelhead from our coastal rivers, striped bass from the San Francisco Bay/Delta, and the immense sturgeon photos from the days with limited regulations to see the handwriting on the wall if regulations aren’t adapted to current times.

Of the 27 species of sturgeon in the temperate Northern Hemisphere, all are considered in danger of extinction. The two species in California are white and green sturgeon, and since green sturgeon was listed as threatened in 2006, take of this species is illegal.

For the majority of the 20th Century, the take of white sturgeon was restricted, and even after being opened in 1954, recreational anglers struggled to land even a single sturgeon since so little was known about their habits.

However, within the past two decades, the knowledge, techniques, and technology has improved exponentially, resulting in six-packs and private boaters routinely returning with up to six limits of white sturgeon per day. The use of salmon roe along with the specialty cures pioneer by the late Rich Tipton, has led to extreme efficiency on landing these prehistoric fish.

The increased efficiency has led to unlimited numbers of weekend-only six-pack operators in addition to the full timers. With the lack of fresh water flow the past few years, the bulk of the sturgeon have stayed in the same area from Pittsburg to Martinez, making for conditions similar to ‘shooting fish in a barrel.”

Even though additional regulations were enacted in 2007 including a three-sturgeon annual limit via the Sturgeon Report Card, lowering the slot-limit from 40 to 60 inches at the fork, and making it illegal to take a white sturgeon over 68 inches out of the water, the take of white sturgeon has only increased. Since it appears that individual anglers are reluctant to catch-and-release after paying $250 for a charter trip, it’s time to close the barn door.

According to November’s California Water Blog co-authored by the noted scientist, Dr. Peter Moyle, sturgeon species remain highly vulnerable to human activities due to their long lifespans, late age-at-maturity, periodic reproduction, and long migrations between freshwater rivers and the ocean.”

In addition to the threats from low water in the spawning grounds, excessive take, and pollution, hundreds of sturgeon perished in the San Francisco estuary in late August and early September with the algae bloom in San Francisco Bay.

The California Water Blog article quotes Jim Hobbs, program manager for the Interagency Ecological Program at the California Department of Fish and Wildlife (CDFW) Bay Delta office, as stating, “The white sturgeon carcass count total will be over 400 and the total for green was 15.” Because dead sturgeon tend to sink rather than float, the total number of perished individuals is almost certainly much greater.”

The following recommendations were made by Dr. Moyle, et.al. based upon the current threats to California’s sturgeon populations:

There’s a reason why idioms continue to have meaning, and if we look at what is actually happening in real time along with our past history, it is clear that the barn door has a short window for closure.

Are we willing to wait until it’s too late to make a difference? It’s in the hands of the Fish and Game Commission and the California Department of Fish and Wildlife to read the tea leaves right in front of our faces and advocate for change.