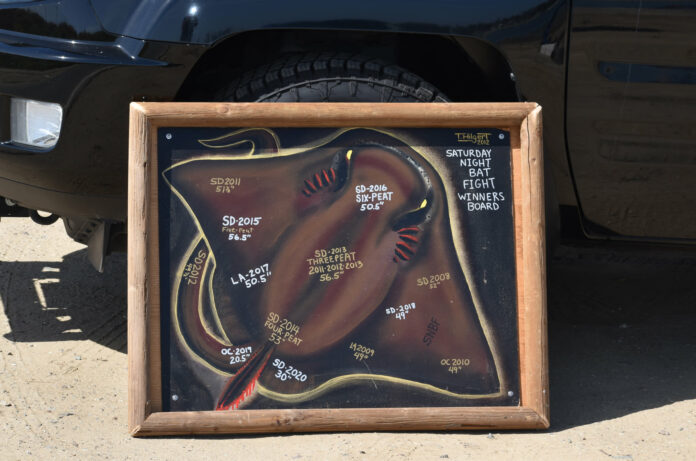 Fishing tournaments can run the full gamut from life-changing payouts at WON’s own Cabo Tuna Jackpot to the most niche of local contests with little more than bragging rights at stake. Coming from a competitive fishing background, both ends of the spectrum fascinate me, but, for several years, one in particular has been on the must-win list.

The contest in question is called Saturday Night Bat Fight and the premise is simple: catch the biggest bat ray (Myliobatis californica) surf casting on a set day in March, between the hours of 6 a.m. and midnight. The four counties in Southern California – San Diego, Orange, LA and Ventura – each act as a team, with individuals representing their home county. The county with the biggest bat, judged by an accurate wingspan measurement recorded on video, wins both bragging rights and a spot on the winners list.

The contest originated on a SoCal fishing website called Prehistoric Soul; the guys do a great job of organizing the event every year and 2022 was my fourth consecutive Saturday Night Bat Fight, now in its 15th installment. Previous years have been a grind with stormy conditions and a lull in surf fishing action guaranteed to coincide with the set date. We’ve caught big butterfly rays, thornbacks, Pacific round stingrays and just about everything else apart from a decent bat ray.

So, this year, it was par for the course as we watched the wind and surf forecast jack up just in time for the contest. Warm and cozy on the beach, it was not. But, with my Orange County team of Tam, Pat and myself assembled and multiple rods rigged with a bat ray-specific set-ups, we deployed big squid baits in some nasty conditions as the sun went down.

We didn’t have to wait too long before a rod cast right into the messy surf went ballistic and I was attached to what felt like a ray of some sort. After a short fight, a nice bat ray tail whipped out of the surf and I was soon measuring a 34-inch mud marlin with welcome and very able assistance from my team mates.

A great start, but with the winning mark in previous years as big as 56.6 inches, I wanted a bigger one as I felt our 34 incher probably wasn’t big enough. We fished for several more hours for a couple more smaller bat rays. Someone, somewhere likely had a giant 50-inch-plus ray that would trump ours, I felt. 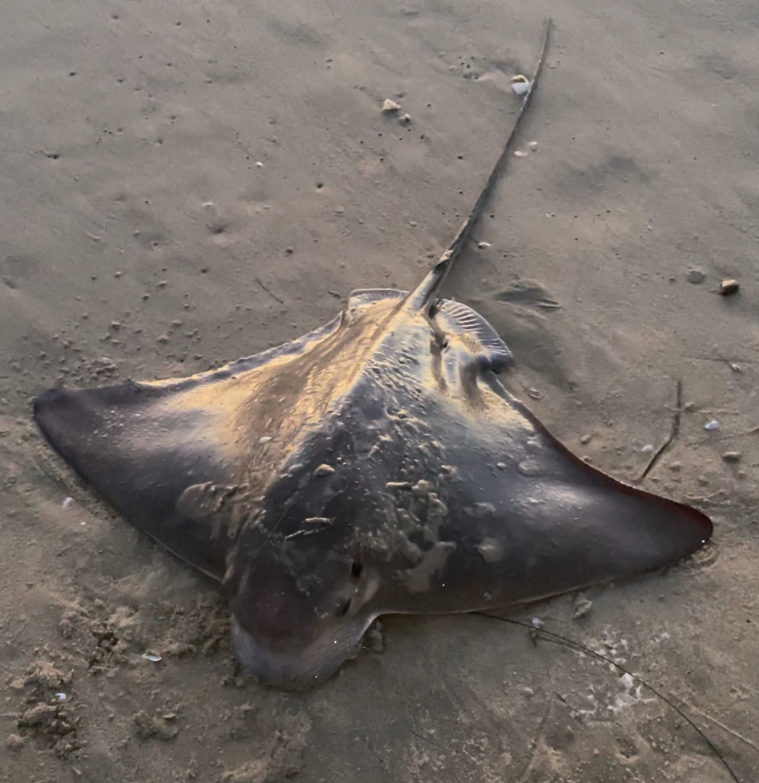 With the contest running until midnight, we got home with just enough time to upload the video with stills and meta data as verification of our catch at 11.45 p.m. In previous years, teams held off officially posting giant rays until the last minute in a game of angling brinkmanship, based on the notion that someone seeing a bat ray of a certain size caught early in the day may be extra motivated to beat that and stay later or fish harder than they would otherwise.

It’s like the bass guy who pulls out the lunker last during the weigh-in. You never know where you’re at until the final bell.

So, with no idea of where we stood in the contest, we had a nervy 30 minutes between uploading our catch and the official announcement. A browser refresh at well past midnight revealed that Team Orange County had taken the win with our 34-inch fish, beating a 30-incher caught by the San Diego crew into second place. A slow night’s surf fishing across SoCal played into our hands nicely.

Prize-wise, there isn’t exactly an $80,000 cheque with my name on it in the post, but Orange County will have their name on the winner’s board forever and the victory pushes my home county above San Diego in the all-time winners list.

You can’t buy those bragging rights.

One of my fishing accomplices for the day was a friend, Tam. He’s one of life’s true gentlemen – always looking out for others and happy to help – but he’s not been too well lately, so I would like to dedicate the win to Tam, his family and his continued recovery.