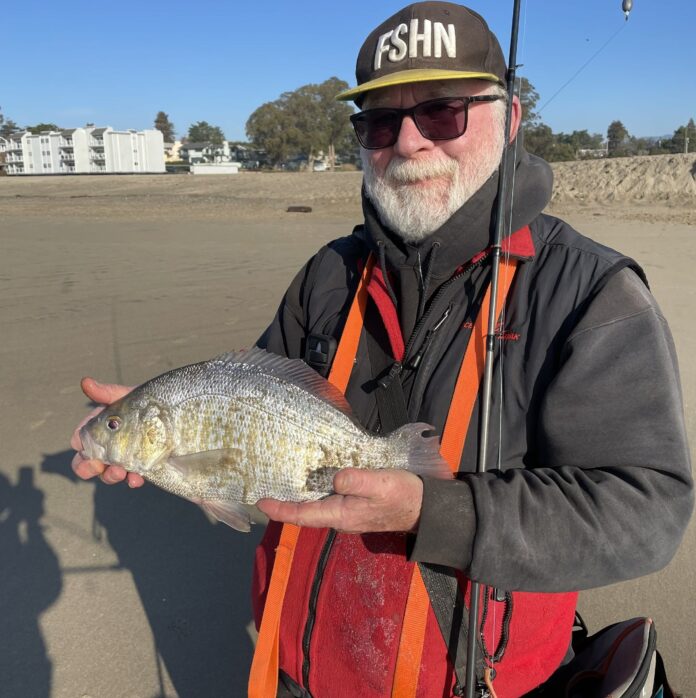 SANTA CRUZ – The winter weather so far looks very promising for the growing community of surfcasters in the Monterey Bay region. We’ve had plenty of rain accompanied by big northwest swells and strong side-shore currents. Tons of sand are shifting, being dredged from some spots and depositing on others.

This makes for more dramatic beach structure featuring sand bars, troughs, and channels along the nearshore surf line. Exactly the type of habitat that holds and concentrates food sources for our wintertime surf cast prey, striped bass, and surf perch.

The past two years provided very little in terms of striper action around Monterey Bay. Let’s hope that the free-flowing rivers and streams along with improved beach structure will make this winter different.

Fishing for perch is going strong. It’s good and getting better. While some days at some beaches feature plenty of fish but few of any size, we’re noticing the appearance of some hefty slabs within the past few weeks. Brandon Whittingham from West Marine in Santa Cruz pulled in a fat 14.5-inch fish from an Eastside Santa Cruz beach last week. The barred surf perch slammed his jerkbait.

In that same area this week, I caught what might be my personal-best barred surf perch, a whopper that measured 15.5 inches and weighed in at two pounds, ten ounces. It was a pig of a fish, caught while using a sandworm from GULP! Soft aromatic baits like the GULP! sandworms are a proven method for enticing a bite, as are the tried-and-true array of paddle tail or curly tail grubs. The grubs come in a variety of sizes and colors, with root beer or motor oil among the most popular.

An increasing number of surfcasters are using smaller jerkbaits in the surf. Throwing a larger lure might result in fewer fish, but they are all likely to be bigger fish as well. The venerable sand crab will always be a “go-to” bait for surfcasters up and down the coast.

Note that new California Department of Fish and Wildlife regulations forbid the use of dip nets for collecting sand crabs since 2022. And there is actually a limit of 50 sand crabs for each angler.

The sand crabs are a little harder to find during the winter season. Some anglers will collect the sand crabs and save them for future use. One method to preserve them is to blanch in boiling water and dry them then freeze bunches in individual zip lock bags. Don’t save more than 50 per bag, though or you’ll be over the limit.

Check out the latest issue of Western Outdoor News for the new and expanded surf fishing coverage featuring the entire California coastline plus tips on baits and tactics.