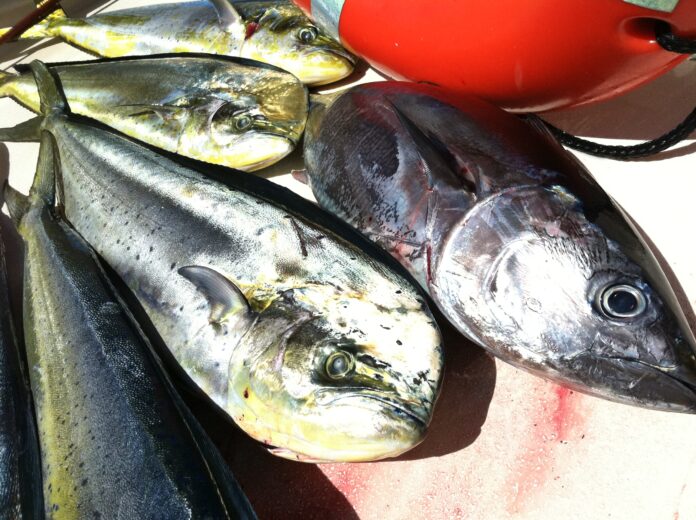 This season has been great for offshore fishing for yellowtail, dorado and tuna — both of the yellowfin and bluefin variety. As happened last year, the water offshore has stayed more constant, where as the inshore water has turned over a few times, really throwing the inshore yellowtail off their regular game. Hopefully the water gets back to normal 72 degrees so we have a grand finale to the season.

The fish have been coming off kelp paddies as close as 5 miles off the beach, but mostly at the 9 Mile Bank. They can be found everywhere from Mexico to San Clemente and Catalina islands and everywhere in between, it’s just a matter of how much gas you can carry and what’s safe for your boat. The ocean gets very rough once you get about 50 miles out. The paddies can be as little as a two-by-four and as large as a garage door. Just keep your eyes peeled for birds landing on them or sitting on them.

Now please remember that when the bite starts going really good offshore, don’t just charge out there. Make sure your boat will even go 50 miles round trip. Is your bait tank OK and running well? Some of the tuna out here are giant and you should have your tackle ready as well — new lube and drags, and maybe time for some new line.

So, how long will the paddy hopping and offshore action last? Almost every year the fishing goes into November, and even in some years, December. It’s mainly dependent on the water temperature and how far you can travel in your boat as the tuna drift out of range to the south for most small boats. Again, gas and size of your boat will make a difference in how far you can travel after them.

Last month and up until now, the hot spots have been the Desperation area off San Clemente Island south all the way to the 302 and 425 and points south into Mexico. But, you never know where you may find a streak of the right water. Many boats found fish around the 302 and the fish were in the 8-pound range with a few 10- to 20-pound fish. They use everything from live bait to trolling with cedar plugs.

Once you spot a paddy, you can troll by it or just slide up on it and throw a bait or three in the water. I like to troll by and throw a handful of bait as we pass and watch for boils. Then when you decide to slide up on it, don’t use the motor, but pull up wind and float with the wind past the paddy, staying a casts distance away.

Most of the time your bait will swim to the cover of the paddy and if the dorado or yellowtail are there, you will know it in a second. The dorado don’t usually run to the paddy, but the yellows do, so be prepared to pull.

If you have down scan or side scan sonar, or even regular sonar for that matter, look and watch for marks under the paddy. There could be fish down deep and it may take some chumming to get them to come to the surface. Yo-yoing a jig may get the action started as well. You need to get one hooked to get all the others to take action. There could be tuna down under the dorado as well, so drop a bait down to them and you may get them all stirred up.

Remember, if a boat is already on the paddy, radio and ask permission to join the party. If no answer, then just go up wind and drift on by. Never charge into a paddy or approach it if a boat is already on it. There should be enough fish for all if you slide in softly and quietly. Once you hook up, you will drift away from the paddy to start your own battle.

Gear for fishing the paddies can range from light to heavy. Many anglers are now fishing with spinning gear — fun fishing for the dorado since they can be line-shy at times. I myself have been using a set of Daiwa Proteus spinning rods with BG 4000 and 6500 reels. I’m loaded up with Daiwa 65-pound J-Braid and run a 20- to 60-pound leader of Maxima fluorocarbon. Mustad supplies the hooks with #10827 bait hooks. Some anglers though prefer a circle hook for that perfect corner of the mouth hookup. Poppers and jerkbaits have been red-hot options as well.

Of course, regular tackle from light bass gear to heavy conventional gear works as well, but I have preached to you all to be ready and prepared. You can’t grab your old rod you haven’t used in years and run out after these fish. You must check your drags, reline and tie on a new hook. The points on hooks do deteriorate even after just sitting in a package if they have been near the salt air. They are so sharp the point can rust away easily. Better to invest in a new pack of Mustad hooks then keep wondering why you get bit and don’t hook that fish of a lifetime.

There will be surprises, and when that happens, you need to be ready. What if the bite goes from small yellowtail to giant tuna or small dorado to 20-plus-pound yellowtail? Always start a little heavier and if not getting bit, then drop down to lighter tackle, unless you are well versed in playing out a big fish and just love light tackle action. The fish will always eat the light line, at least most of the time.

Last week my stop on a paddy produced dorado, but I was also surprised with a 40-minute battle with a good-sized tuna, only to have the hook pull at the boat. You just never know what will happen in the heat of the bite. The tuna have been hanging under some paddies, so be prepared. You could think you are on some nice dorado and boom, you start hooking nice bluefin or yellowfin tuna.

The fish are there and can be found, so you need to go if you haven’t already and score some meals for the winter. Barbequed yellowtail, dorado or tuna tastes just as good in September and October as any other time. Freeze some up to get you through the winter months as well.