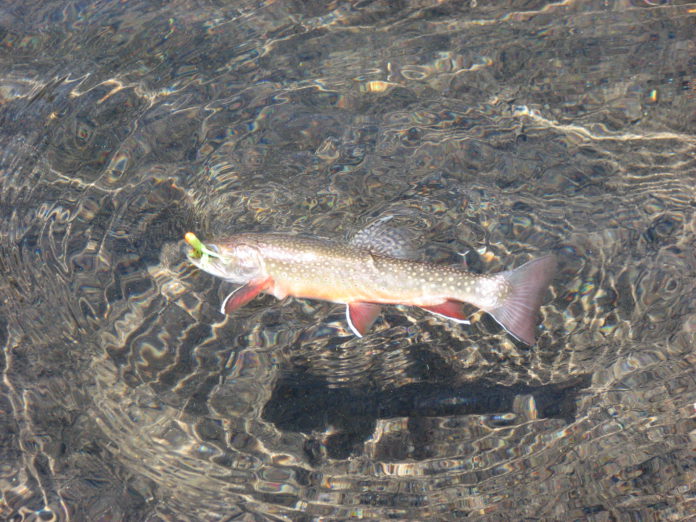 MAMMOTH LAKES – Let’s pretend the events of 2020 had not happened. You know, that year that created a shortage of everything and some of us thought that somehow Eastern Sierra trout season would be an exception? Not to mention the shutdown of three major hatcheries, then a fourth – Hot Creek, which stocks Mono County almost exclusively – had it’s own untimely and virus-based shutdown, albeit temporary. Even without all that, trout fishing in the Eastern Sierra in late summer is a tough deal. Luckily, there is an answer for both that and the lack of easily-targeted pellet-fed rainbows, and that’s brook trout.

In the Eastern Sierra, brook trout are easy to catch, are pretty much everywhere, and a 12-incher is borderline trophy status. I threw that last bit in the because considering the fact that most state-stocked fish get delivered at “two fish per pound,” similarly-sized brook trout should fill that gap nicely, in theory anyway.

Here’s where brook trout get the nod over DFW truck trout: They’re all wild fish, they’re better looking and they are arguably less picky about what they’ll eat. Many think they are better table fare than hatchery rainbows, and in some cases (mostly backcountry), it actually does the population in a given lake some good if some get hauled out for the frying pan. Also, when you consider the enormity of the Sierra backcountry, brook trout are more prolific than silver-bullet stockers.

Admittedly, brookies don’t beat ‘bows (at least not without a debate) across the board. Hatchery rainbows are present in more bodies of water that are easier to get to than brooks, that is to say, there are way more options for driving up to a lake and catching a rainbow than a brook trout. Also, pound for pound (or in this case, ounce for ounce) a rainbow is likely going to put up a better fight than a brook.

An angler would actually be hard pressed to find an Eastern Sierra lake that doesn’t have brook trout in it. I’m talking day-hike range here. The list of Sierra trailheads dotted with brook trout water is endless, so diving into maps, or even better, the books Fishin’ Trails and Fishin’ Trails 2 by Jared Smith (GM of Parchers Resort) and Seth Blackamore that are absolute bibles for this kind of stuff, is the way to go.

That being said, regardless of where brookies are being targeted, the same methods work just about everywhere. If I was fishing a backcountry lake for the first time, I’d throw a Kastmaster or spinner right out of the gates just to see if anyone’s home. Chances are, you’ll get followed if not bit if not hooked up on the first couple casts. After that, it might be on like the break of dawn with one hookup after another at which point I’ll move on to something a little more fun to throw like a minijig, which also makes for easier catch-and-release with a single hook.

If I know the fish are there but the bite is slow, I’ll let the jig sink and crawl it along the bottom, or I’ll try a fly (either on fly gear or a fly-and-bubble rig on spin tackle) since it can also be presented dead slow if not stopped. It’s usually only slow early in the season when the water is frigid right after ice out. After that and for the rest of the season, those fish very aggressive and at times “racing” each other to chase down a target. The feeding window is short since their lakes are at altitude and might not thaw out until well into June, then the ice can be back as early as late fall, so they need to take advantage of chowing down whatever they can, while they can.

On a backcountry lake that holds brook trout, there are rarely dead areas that won’t produce, but brookies do tend to congregate in certain types of areas. Sure, they’ll hang out just offshore if not right up against a creek or snowmelt inlet like all species of trout, but they also have their own set of species-specific hangouts.

Any form of wooden cover is brook trout paradise. This could be a logjam at a lake’s outlet, a beaver dam on a creek or a blown over tree (bonus points if the snarled root system of the tree is also in the water), or even just an area of floating sticks to hide under.

At this point, I liken it to bass fishing, or, “flippin’ for trout.” Brook trout like to just hole up where they feel safe rather than school up and travel throughout a lake like other trout. They also are more likely to grab a jig on the sink than other trout (although golden trout are in that conversation), so simple underhand pitches of a minijig around that brand of wood-based cover usually draws them out of the sticks. They’re always most aggressive on the first casts, and they’ll usually stay on the bite for a fair amount of time before they wise up and slow down. At that point, move on to the next target, and the next, and when there are no more left, go back to the first one and they’re usually willing to go again. When the flip bite isn’t happening, long casts with smaller spoons or spinners and a steady retrieve usually gets the job done on open water fish hanging offshore.

If you’re a first time day hike angler, check out Arrowhead Lake and Skelton Lake up the Duk Pass Trail which starts at the Coldwater Campground near the back of Lake Mary, Little Lakes valley out of Rock Creek Lake and the 20 Lakes Basin accessed from the back of Saddlebag Lake up on Tioga Pass.

Brook trout are synonymous with the backcountry, but they exist in “drive up” lakes at a level casual trout anglers may not be aware of. First of all, they’re in all the lakes to some degree, even some that don’t officially list brookies as occupants.

Generally speaking, on these lakes they don’t often share the same areas as other species. If there’s flooded timber, that’s definitely a place to look, but they’ll also be found over rock slides that continue into the lake, or relating to bigger individual boulders spaced out across an otherwise featureless bottom within casting range of shore. Most drive-up lakes have easy access shorelines where most shore pounders fish, but if brook trout are going to be caught, it will almost always be the harder to reach zones on the opposite banks.

Since brook trout in these lakes aren’t the same as in the backcountry in that they’re not just everywhere regardless of the body of water, here are some examples of areas I’ve run into them in:

The rock slides at the back of both the lower and middle lakes at Twin Lakes in Mammoth have produced brooks on a fly-and-bubble and the occasional spinner.

The largest brook I ever saw in the Sierra (other than the football-sized models at a particular backcountry lake used as a breeding ground for fish to stock elsewhere) was caught by a buddy at the outlet of Twin Lakes in the Mammoth Lakes Basin.

In terms of numbers, Virginia Lake has produced more brook trout for my group than any other frontcountry lake. In fact, when we were up there for a week in June, most of the “resort lakes” were slow, and our numbers for the trip would have been pathetic if not for the brook trout at Virginia. The best area was the shoreline between the inlet all the way to the first cove in the back before the bank gets too steep to walk around. With polarized glasses, it was easy to spot big boulders, and a jig tossed at it usually resulted in bites, many of which on the sink.

I’ve run into exceptions to the whole “brook trout don’t hang out with other trout” thing, and usually it’s at a lakes inlet. Catching them there doesn’t seem to be a matter of where you’re fishing but what you’re casting. At the back of Saddlebag Lake, there are several inlets along the whole shoreline. We catch a ton of rainbows back there, but I’ve noticed when I switch from a jig or spoon to a dry fly or Woolly Bugger and send them within say, 20 feet of where the creek meets the lake, I’ll start picking up brook trout.

Tioga Lake is just a few minutes further up the road from Saddlebag near the back entrance to Yosemite, and it’s also a great easy-access brook trout lake. The best areas for that are the shoreline from the inlet all the way to the campground where you can stand on huge rocks and cast into deep drop-offs, and the shallow flat in front of the main inlet. An easy hike to the shoreline opposite the road features small creeks that flow out of backcountry lakes, and brooks tend to hang out in front of those inlets, too.

Those are just a few examples of specific lakes and spots, but regardless of what Eastern Sierra lake you’re fishing, those are the types of areas you want to zero in on to target brook trout.

In terms of tackle, Eastern Sierra brook trout are the least-demanding salmonid on the planet. On that June trip, I hiked up the Duk Pass trail and fished three different lakes and did it all with an Altoids tin (seriously, I thought it would be funny) packing a few jigs, spinners and Kastmasters, and it was plenty. Minijigs are my go-to, the spoons are old-reliable and invaluable when the wind is blasting you in the face, or if all the biters are near the end of a long cast. The spinners are all-around killers that also work in the creeks going in and out of the lakes.

If I’m fly-fishing, dry-flies almost always produce, and my favorites are Stimulators and Parachute Black Gnats (but I honestly think it doesn’t matter, pick a few classics and get after it), or the ubiquitous Woolly Bugger for subsurface work. That’s all done with a 4-weight setup, but a spin guy can do it with a fly-and-bubble half-filled for dries and full for subsurface.

The only line I ever use for brook trout is 2-pound because I can cast the lightest jigs with it. I always have a spool of it with me, because I have had a wind knot so bad that I had to pull most of it off and refill my reel on the spot. Hiking to a backcountry lake and having the fishing cut short by something like that would be a nightmare.

The longest ultra-light rod you’re comfortable with, the better, as it makes longer casts with the lightest lures a piece of cake. But seriously, your water bottle and beef jerky should weigh a lot more and take up a lot more space than your tackle in brook trout country.