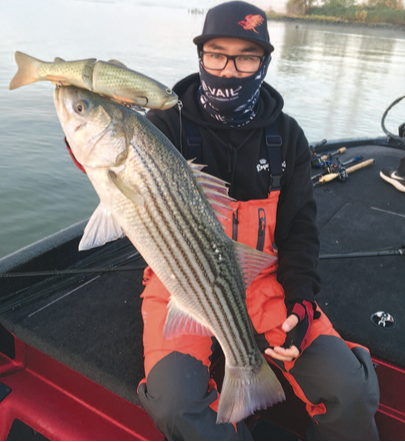 Over the past few years, a new lure has been gaining traction as a tool to target trophy-sized striped bass: the glide bait. The glide bait is a single jointed, hard-bodied swimbait that has a wide, Sturning movement. These baits range from 4 to 12 inches long and can weigh from 2 to 10 ounces. Known for its large profile and ability to draw fish from a long distance, the glide bait provides a large target for hungry stripers looking for a substantial meal.

Mainly known as an open-water bait by bass anglers, the glide bait is extremely versatile when used for stripers. It can be fished in shallow water, around cover and handles heavy current well. One downside of large glide baits used to be the cost, as many baits retailed over the $100 mark with some custom baits going for over $300. Over the past few years, established lure companies have entered the market and now offer lures from $20 to $80, making the baits accessible to all levels of anglers.

One question anglers always ask is, “Where should I be throwing a glide bait?” The answer is simple, it can be fished in the same areas and situations that you would choose a crankbait or paddle tail swimbait. It can be used in open water as a search bait or be used to pick apart a piece of cover such as a laydown or current break. 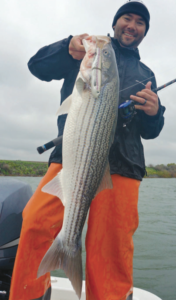 In the Delta, we use glides with an extra slow sink rate (XSS) to fish water as shallow as 1 to 3 feet. In the clear, deep rivers of Northern California, glide baits can be fished in the upper water column and still draw fish out of deep holes. I have seen fish in 20 feet of wa ter come up to smash a bait be- ing fished near the surface. While glides excel in clear wa ter, they are also very effective in stained water. Due to their large size, glides displace a lot of water, making it easier for stripers to find the bait with their lateral line, even in off-color water. Water temperature doesn’t seem to deter stripers from chasing a glide either. Many large fish have been taken in the dead of winter with water temps in the mid-40s.

Like all lures, glides can be fished with a few different retrieves — steady winding, imparting action with reel handle turns, and even fishing them similar to jerkbaits can all draw strikes. Imparting action can result in the bait darting to the sides erratically and some baits have the ability to turn 180 degrees and face the fish, causing a reaction strike. During the major spring and fall striper runs in the Delta, the fish tend to prefer a faster- paced, erratic retrieve. Stripers are known to chase down fast-moving baits, so fishing a glide on a fast retrieve forces the fish to react and doesn’t allow them to get a good look at the bait.

With so many baits now on the market, bait selection can sometimes be overwhelming. Selection may depend on the forage in a certain body of water. When trying to imitate trout or salmon smolts, baits like the Deps 250 or the River2Sea S-Waver are good options. For those stripers eating shad and panfish, the G-Ratt Sneaky Pete and BGC 7-inch Glide Shad are top choices.

Fortunately, unlike largemouth bass, stripers aren’t too picky when it comes to color or bait profiles. I have seen stripers taken on solid white or bright chartreuse glides in clear water, proving the point that color may be secondary to bait action. If I had to narrow color selection down to a few proven patterns, they would be: trout, shad and bone — the bone color being the most versatile and will work in all water conditions. It is just one of those magical colors. I have experienced success with it in water clarity of less than a foot as well as gin-clear water. When anglers ask, “What color?” My response is usually, “When in doubt, throw bone!”

When targeting trophy-sized striped bass, having the right tackle is crucial. A typical swimbait setup used for bass is a great starting point. The rod needs to be H-XH in action and 7’ to 8’6” in length, although a heavy flipping stick can be used in a pinch. For reels, 200- to 300- 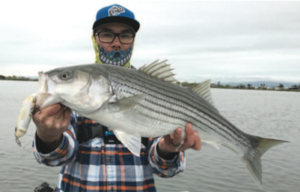 sized baitcasters with fast gear ratios are advised. Reels should be spooled with 65- to 80-pound braided line. Some anglers choose to run straight braid, while others will attach a short 3- to 5-foot leader of 30- to 40- pound fluorocarbon. The leader helps with both abrasion resistance along with providing a little stretch, which absorbs big fish headshakes and jarring hooksets. Another advantage of running a leader is preventing the braided line from fouling in the bait’s hooks and split rings.

Since most glide baits are designed and manufactured with bass in mind, their terminal tackle is rarely up to the task of landing a large striper. Many, including myself, have learned the hard way. I’ve had stripers as small as 5 pounds straighten hooks and open up stock split rings. I highly recommend upgrading the hardware, and I have found great success in the OWNER Hyperwire split rings and OWNER ST-56 3X strong treble hooks.

Like many other new techniques, the use of glide baits has been quietly gaining popularity from guides and local trophy hunters. A technique that was once only embraced by hard core swimbaiters is now becoming the go-to bait for all striper enthusiasts. So don’t miss the bus on this one! On your next striper trip, have a glide tied on and get ready for the possibility of a wild ride!