My office is a collage of outdoor success photos. From small game to big game and everything in between, I hunt it all. While I do have several types of hunting that I participate in more frequently, I really don’t have a favorite game animal to pursue. Much like my fishing career, I enjoy diversity and chasing whatever is seasonally available.

One of the first upland game species I ever harvested was a band-tailed pigeon. Still in high school, I was hiking the pine covered hills of the Los Padres National Forest in Santa Barbara County with my first shotgun, an H and R single shot 20 gauge. Cutting through a stand of tall trees, two dozen birds flushed from the branches above me. I swung on the flying birds, picked one out and dropped it with the single shot. I walked over and picked up my prize. The pigeon was iridescent, with bright yellow feet, a white bar across the back of the neck, and of course, a dark bar on the tail feathers. They trulyare beautiful birds.

The seasons here in California are divided into a northern season and a southern season, and neither are very long. All of California north of Mendocino County is considered the northern location and is open from Sept. 18 to Sept. 26. The remainder of the state south of that is considered the southern location and is open from Dec. 18 to the 26. The daily bag limit during these short seasonal open- ings is two birds per day. These abbreviated seasons are owed to a limited California population and are likely the reason this species doesn’t garner much wing shooting attention.

A portion of the California band-tailed pigeon population are migratory and breed and nest in the coniferous forests from Northern California to as far north as British Columbia. During the winter months, these migratory groups will fly south and mingle with resident populations in central and Southern California.

This species feed on fruit producing shrubs of early-stage forests during spring and sum- mer. When the weather gets colder, they’ll shift their diet to acorns as most coniferous trees go dormant during the winter.

Before I relocated from the San Diego area in the early 2000s, my good friend Darrin Bergen and I set out to hunt the short southern season of bandtailed pigeon. We drove to an area where we had seen pigeons in the past. We loaded up our gear and split up.

I walked an old fire road for a half a mile, weaving my way through large pine trees. At a bend in the road, I stopped and looked up just in time to see over 50 band-tailed pigeons flush from the huge tree and head straight away. I dropped one of the lead birds and was able to fill my limit with a second bird that left the tree a few seconds late.

I grabbed the walkie-talkie and contacted Darrin. I was trying to describe my general location when I noticed the group of birds had circled back and were landing back in the tree I had just flushed them from. With some coordination, I met up with Darrin a few hundred yards from the pigeon tree and pointed it out. Darrin quietly hiked to the base of the larger conifer, and three shots later, he also bagged his limit.

It’s obvious from the limited bag limit and the very short seasons, that the population numbers of band-tailed pigeons here in California are low, but still huntable. In fact, the bag limit and seasons have not changed in over 20 years, indicating stable numbers.

I don’t see them often, but when I do I make note of the location in case I’m in the area again when the season opens. They are a challenging species o hunt, and usually occur in large groups. They will make the standard cooing sound most pigeons make but I’ve personally noticed that during the season, they tend to remain quiet.

I have many hunting highlights in my career. One of my most memorable was that brief hunt on those San Diego mountains where me and my late buddy Darrin bagged limits of band-tailed pigeon. That’s a memory for a lifetime. 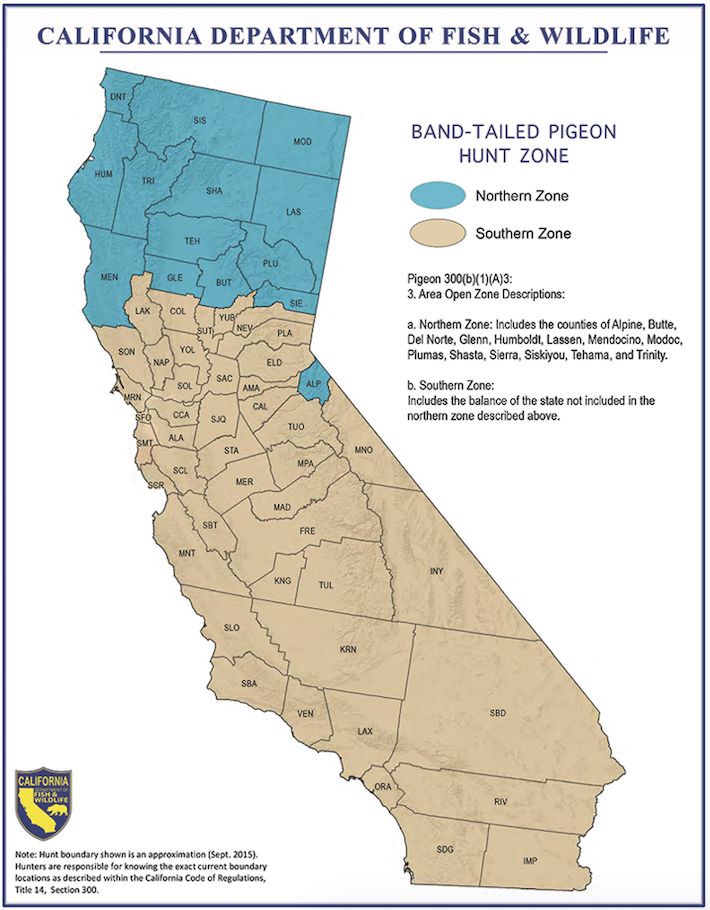