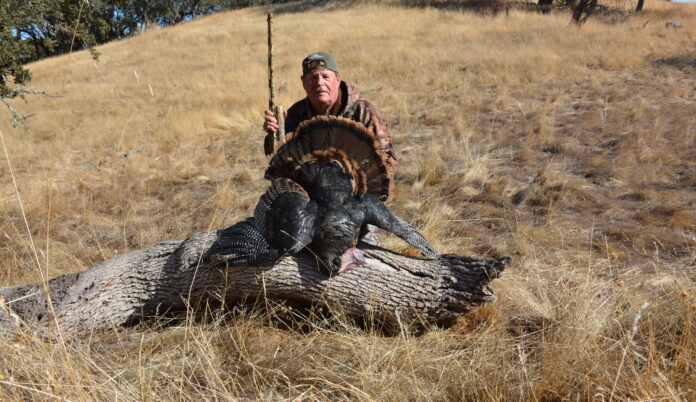 PASO ROBLES – Fall turkey season kicks off this coming weekend, Nov. 12, and based on feedback from guides, hunting up a fall gobbler should be rewarding. Unlike the spring season, hunting techniques change as birds tend to flock up together with hens, jennies and a few jakes in large groups, while adult toms head off in smaller satellite flocks.

This hunting writer has enjoyed many fall turkey hunts and most have been successful in the harvest of a big gobbler for a Thanksgiving dinner feast. Scouting has been one of the keys to shooting a tom, but updated information from a rancher or the hiring of guide/outfitter are extremely important to hunter success.

Unlike the spring season, turkeys are not very vocal during the fall months. Occasionally your will hear a gobble, but mostly what a hunter will witness are a flock of hens feeding around making soft purrs and some putts. Some guides suggest that the best way to shoot a fall gobbler is to locate a satellite group, break it up and back off. After a short period, locate a good shooting spot (blind) and start very subtle calling in hopes of getting the toms to regroup.

Locating a group of toms can consume time, as they tend to pretty much stay in heavy cover and often are difficult to see as they move quietly through shoulder-high sage, in stands of white oaks or around thick thorn brush. Although there are times when a flock can be spotted in a clearing as they move from one feeding area to anoth- er or head to water.

Most all fall turkey hunts require a lot of driving around trying to find toms, while often spotting large groups of mixed hens, jennies and small jakes. It’s not all that important to get up early in the morning when on a fall hunt, unless you are hunting with a guide who has roosted a flock of birds the prior night. Unlike the spring season, this writer has seen birds change their roost site from one digger-pine to a tall stand of oaks after a full day of feeding in a wide circle.

The main key to fall turkey success is to be able to pattern a flock of toms and get in a position to ambush a tom as the flock moves across an open shooting lane. Turkeys are pretty predictable when they are on the move, although they often hold up for a while in cover be- fore moving on. Recalling one hunt with master guide Roger Miller of Miller Bros. Expeditions (805-423-5487) based out of Parkfield, we spotted a flock of gobblers moving through a valley that was pretty open with the exception of an arroyo in the bottom of the dry stream bed.

The only way to get a shot off at a tom would be to get way ahead of the flock, jump into the arroyo and then work my way back to a good ambush spot for a clean shot. It didn’t take long for the flock to get into shotgun range, as they were moving pretty fast through open terrain. There was one long-beard taking up the rear position of that flock which required patience and complete stillness, while allowing the other birds to pass by before taking a shot at the 10-inch bearded gobbler.

There is a lot of talk among turkey hunters about the effectiveness of newly developed TSS Shot (Tungsten Super Shot), which often is mixed with other non-lead shot for both turkey and waterfowl hunting. Due to the fact that a hunter is not likely to get a close range shot on a gobbler coming in to a hen decoy during the fall season, this hunter opts to load up first with 3-inch, #5 shot, backed up by a round of heavier #4 shot.

If a hunter opts for an auto-loader rather than a over/under shot- gun, the last round in the magazine could call for a heavy high-velocity load of #2 shot. This heavier ammo is better suited for fall turkey hunting season due to the fact that most of the toms will offer a shot at distances from 35 to 50 yards out.

While the quest for most turkey hunters is to shoot a mature tom, don’t be hesitant, especially if it’s late in the day, to shoot a jake. These young toms can be a challenge to sneak up on and are excellent eating. In addition to harvesting a jake as an option, the fall season allows for the harvest of either sex, thus allowing for the shooting of a hen.

The bag limit on turkey for the fall season is two birds and the season will continue through Dec. 11.