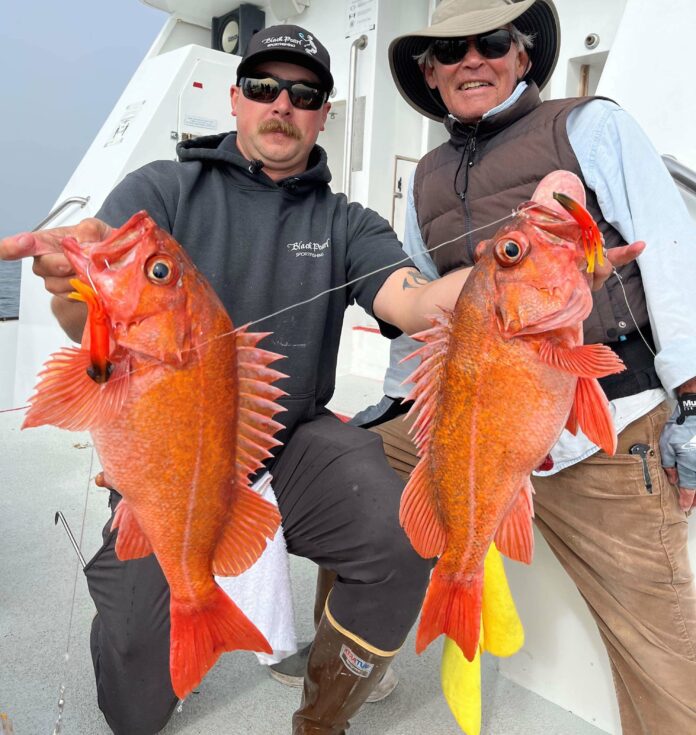 MORRO BAY — The year 2022 will be known as having one of the windiest springs in recent memory. Despite losing many days of fishing due the blows along the Central Coast, Black Pearl stood ready to roll when anglers boarded for the WON charter’s planned midnight departure.

Captain Brian “Ahab” Walker warned that the rough seas and winds would last through the night but should subside by morning. “We’ll run up as far as we can tonight and should be past Cape San Martin by daylight. Not much fishing pressure up there due to the weather lately, so things look pretty good,” explained the skipper during the safety briefing. Lisa Tardif, owner, and operator of Black Pearl, running out of Virg’s Landing in Morro Bay, takes pride in making passengers feel at ease aboard the Pearl, both regulars and newcomers alike.

Check-in began at 8:00 p.m. Thursday night allowing anglers ample time to situate gear, munch on some complimentary pizza, find a bunk and settle in for the night. Dylan Depres, WON sales rep and charter manager, came along to fish and give out prizes. Depres brought with him Frogg Toggs dry bags holding a spool of 30-pound AFW Hi-Seas super premium fluorocarbon and a pack of hooks from Gamakatsu for each charter angler.

Charter sponsor HUK Gear sent along a certificate for $100 that would be awarded to the angler with the heaviest fish of the day, along with a 500-yard spool of Berkley Pro-Spec braid and a Plano Z series lure wrap bag.

Through the night Captain Ricky Perez took the helm and ran the 6 hours north to a spot along the lower Big Sur coastline, turning over the wheel of the 65-foot sportfisher to Capt. “Ahab” at daybreak. As Black Pearl approached the intended fishing zone, seas calmed and the wind subsided. The skipper got on the P.A.to let everyone know it was time to rig up for the coming day’s fishing.

“Double dropper loop with squid strips and a 16-ounce weight, or a big heavyweight jig will work best here; the bottom is at 300 feet. Trap rigs might work for big reds and lings as well,” called the skipper. Seemingly, the Captain really takes his orders from Captain Cutter, the resident boat dog.

Settling into the first of many drifts through the area, the engines were kept live and the drift angle maintained for the best vertical drop possible despite wind and current. Immediately, larger-model reds and rockfish began to bend rods all around the boat. Black Pearl deckhand Cody Doots got an assist from the new deckhand named Gambit, who does double duty as the new manager of Virg’s Landing and Tackle shop.

Dale Carlton fishes Black Pearl several times a year and makes a point of getting aboard the WON charters throughout the season. The angler was one of the lucky first to bag a big red and other assorted rockfish using brine squid, slow pitch jigs or a yummy-to-the-fish 4-inch mackerel green curlytail grub. Young angler Juan Ramirez of Santa Maria was keen on learning the ropes, working with WON’s Dylan Depres, sharpening his skills and filling his sack with vermillion and rockfish in the process.

After a couple of drifts over the first zone a short move was announced with, “If you’re up, stay up, if not bring ‘em up,” from the wheelhouse. Despite having piloted Black Pearl through the night, Capt. Ricky could be found working deck most of the morning, ready to help with the catch and lending an assist to deckhand Gambit, gaffing and bagging fish.

While anglers loaded sacks, owner Lisa Tardif prepared tri-tip, egg and potato burritos for any angler wanting breakfast. “We take pride in giving that extra measure to make each trip something special, and we start with quality food for our guests,” said Tardif while passing out the great grub during the move.

Local angler Steve “Lucky” Howell also gets out with the Pearl often and managed some sizable catches of his own. The seasoned fisherman worked a trap-rigged mackerel for several fish, including the jackpot-winning fish of the day. Joey Shiba drove over from Fresno with a few friends for the charter, and tricked a sackful of rockfish, including one particularly nice set of double reds.

Winds eased and waves let up, making the day a pleasant chance to fish alongside the rocky cliffs of Big Sur as the sun came out full, warming the day. Several moves through the zone led Depres to find his own reds and rockfish using a mackerel Ahi Assault jig bounced along the bottom and fished yo-yo style.

Last year’s WON-Black Pearl charter had angler Wade Wells take the big-fish honors with an 8-pound bocaccio. The Camarillo angler fished this charter run too, getting a share of the day’s catch, alternating from trap-rigged mackerel to shrimp fly double-dropper loop squid strips.

“Let’s make a big move to work on some lingcod in shallower water,” called the skipper just before noon. Twenty minutes later lines were let out and action got underway once again. While Black Pearl was on the move into shallower waters above White Rock, Lisa Tardif worked with deckhand/galley helper Cody Doots to prepare selections from tri-tip chili bowls to hamburgers and burrito bowls.

Once the boat was set up, lines were let out in hopes of finding lingcod. Current in the area ran strong and mixed, making the essential task of staying down on bottom a difficult one. Throughout the day, few lingcod had shown with mostly shorts coming to hand. Final counts showed just 4 lings in the sacks. As the clock ticked down, the time to head for the docks at Morro Bay drifts in the shallower water gave up more great vermillion and rockfish and a few lings to finish out the day.

The day’s fishing done, gear was stowed and the weigh-in for big-fish begun. Lady angler Elaine Dickerhoof had a sizable red that showed just out of the running on the balance beam. A few other anglers tried to best Howell’s two top contenders with no luck, which must be why they call him “Lucky.” The winning vermillion approached 8 pounds on the digital scale.

The run home covered the distance in five hours, giving the deck crew time to fillet the catch and anglers a chance at a good snooze on the ride back. Totals for 24 anglers on this extended day 17-hour charter: 60 bocaccio, 4 lingcod, 5 ocean whitefish, 95 assorted rockfish and 85 vermilion rockfish (reds).