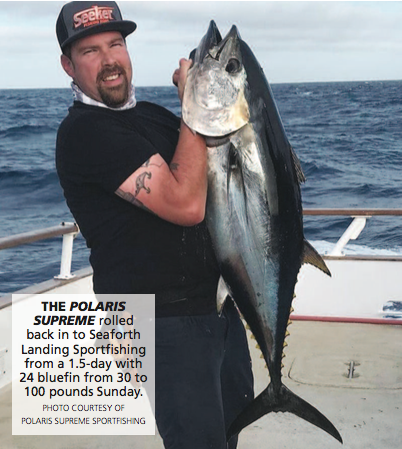 SAN DIEGO — Both the Shogun and Polaris Supreme were out this past weekend, and although the weather was a bit sloppy, they found biting bluefin offshore. While the Shogun was on the first and second days of a 3-day, the Supreme, now at Seaforth Landing was back at dock Sunday morning from their 1.5-day with 24 anglers landing 20 fish up to 100 pounds.

Most of the fish were 30 to 60 pounders, plenty catchable on 40-pound tackle. Capt. Aliyar recommended 30- to 50- pound tackle for fly-lining live baits and smaller iron, a 60- or 80-pound for sinker rigs and Flat-Falls, and even a 100- pound class stick in case the bigger fish they’ve been seeing get with the program and decide to eat the heavy line, so those anglers stand a chance of landing them.

At Seaforth, they already had the Tribute, Pacifica and Polaris Supreme scheduled to go after these fish.

The offshore bite also provided some solid yellowtail action. Thursday the Old Glory, H&M Landing, found the bluefin on a kelp but got no takers. What their 23 anglers did find biting, however, were yellowtail, and they pulled full limits – 115 forks for the trip.

Meanwhile, the yo-yo iron bite in the area around the Coronado Islands was best midweek, with the San Diego pulling 44 forks on Wednesday. Toward the weekend the bite fell to single-digit scores, but there were plenty of bottom biters to take.

Also, the past week did see slightly warmer surface waters in the area and the first few island yellows on the surface iron landed.

For local half-day anglers, bottom biters again proved the best bet, so sinkers and dropper-loop gear remained the go-tos. Catches ran the gamut between lots of whitefish and very few rockfish as the Daily Double had Saturday, to mostly rockfish.

For North County, Oceanside anglers continued to see rockfish and sculpin the primary catches on local half- and 3/4-day trips.

At the Oceanside SEA Center the Southern Cal made her debut, after a multi-year overhaul effort put her in beautiful condition. Sunday’s effort saw 33 anglers bag 100 sculpin along with 15 whitefish and 40 rockfish. Friday the 21 anglers aboard the Chubasco II very nearly all got a full limit of the red devils with 101 sacked.

The SEA Center really started to get their season going with four boats running and 18 trips run this past week.

Things appeared to be quieter for the big boats over at Helgren’s Oceanside Sportfishing. Both the Electra and Oceanside 95 didn’t report having fished.

Landing staff published catches for the Sea Trek daily through Friday, but none over the weekend. The focus there was a bit shallower with fewer sculpin, whitefish and rockfish reported but also a few bass caught – less than a handful on any given day.