Big similarity between last year and this year’s winner

POINT LOMA – The second-annual California Yellowtail Jackpot blasted off on Saturday, June 11, and the outcome has a glaring similarity with the inaugural event in 2021: both were won by teams that weighed in figuring they had no shot.

Team A-Salt Life consisting of Nick Patino, Wes Hutchison, Josh Reyes and Mike Trevino was the first to weigh in at The Marlin Club – San Diego (TheMarlinClub.com), and they came up the ramp with four yellowtail in tow. The biggest three were plucked out of the kill bag, and they tipped the scale at 21.6 pounds…total. At that point, the banter between the anglers and tournament staff was more focused on the fact the team also brought in a 41.8-pound bluefin but were not entered into the Jackpot’s tuna optional.

Being in the running for even a top-three finish was the furthest thing from Team A-Salt-Life’s mind, but after the rest of the field returned with similar reports of favorable conditions, plenty of kelp paddies and an unsettling amount of forkies hooked and lost, they found themselves still on top of the leaderboard when the final buzzer sounded.

According to Hutchison, the team’s success could be be rooted as deep as which direction they chose to go following the shotgun start outside of Point Loma.

“We saw everybody go left, so we went right,” said Hutchison following the awards

ceremony right there in the Marlin Club parking lot. “They were going toward the Coronados, so we headed toward San Clemente Island looking for kelp paddies, and they were everywhere. There were also bluefin everywhere, but we were targeting yellowtail so we drove right through them. We wanted to win the Western Outdoor News California Yellowtail Jackpot, and it feels good to win.”

At weigh-in, Hutchison suggested the team’s pre-tourney research showed a lot of “green” water around the Coronado Islands, which was another reason they opted to head west. They did their damage with live sardines, and they did say they lost some fish that would have definitely been in their top three.

Winning the WON California Yellowtail Jackpot meant at least $3,000 in Suzuki cash was going to Team A-Salt-Life along with sponsor prizes and additional cash from big fish optionals. But, since only one team weighed in yellowtail, there was no second or third-place team in the event to claim the cash earmarked for those teams. So, with Team Salt-A-Life already announced as the winners, Egan grabbed the mic and let them know they would be receiving the cash for first, second and third. When it was all said and done, they were holding an oversized check for $7,687.50. That’s $3,000 for first place, $2,000 for second and $1,000 for third, the rest came as the payout for being in the $250 yellowtail cash optional.

Their sponsor prize haul included a high-end Penn Carnage III rod and Fathom lever-drag reel, a Penn Battle III spin combo, Costa sunglasses and backpacks for each member of the team, an Igloo BMX cooler, a big selection of fluorocarbon from Seaguar and a pile Gamakatsu hooks. They also picked up $500 in products from Huk gear for the biggest-overall yellowtail in the event.

Team Reel Hooker took the tuna optional with a 79.2-pound bluefin that earned them a check for $1,125 and their own treasure trove from Seaguar, Gamakatsu and Suzuki. Already a regular in these WON “local salt” events, “Sinker Rig Shane” Wrightson used a sinker-rigged sardine (imagine that) in fooling that fish after making a run south. Wrightson said they found plenty of kelps, some with birds, but they were all void of yellows.

There was one larger tuna caught, a 96.6 pounder that came back to The Marlin Club with team SWYC-Cat-Fish, but they also had not entered the tuna optional.

Raffle prizes provided by Gear Coop, Gamakatsu, Seaguar, Costa and Suzuki were also doled out during the awards/BBQ portion of the event.

Last year’s winner, Team Desert Rampage were back this year, and they did not weigh in a fish. They did say they lost a big one near the boat, and they did go home with a Furuno unit when their team number was pulled in the early-bird (entry) drawing. They were pretty fired up about that, and in a very cool move, Team Desert Rampage came up and greeted the 2022 winners and congratulated them with a bunch of hand shakes and high fives.

A classy spectacle to say the least, but they’re still competitive anglers in a growing event, and a member of Desert Rampage was sure to leave them with a confident, “we’ll see you guys next year” before exiting stage right. 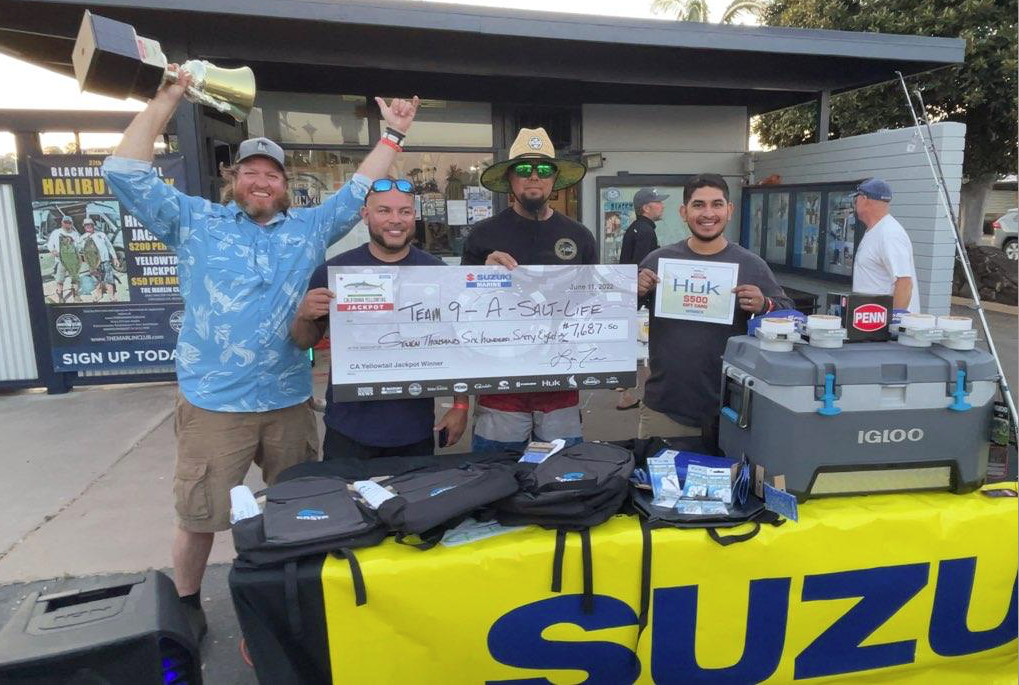