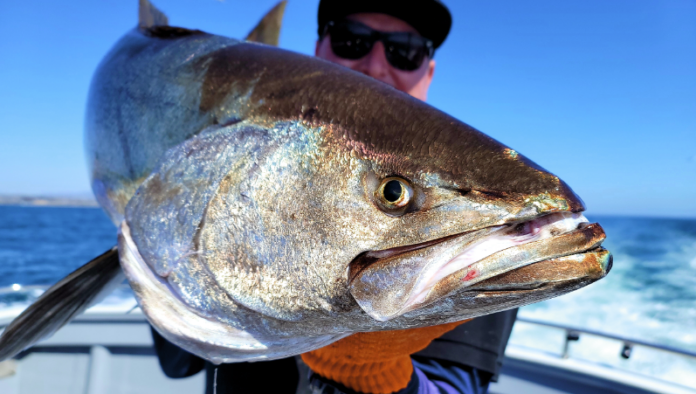 Tanker 42-pound white seabass on the iron off Leucadia

DANA POINT – The Laguna Woods Village Rod and Gun Club have been private chartering the Dana Wharf Sportfishing Fleet for decades. There have been many guest speakers and experts giving presentations at the meetings. Chad Gierlich of Hookup Baits, myself of Dspawn Lures, most recently Dan Hernandez of Fishing with Dan, and many others. When Dan spoke at the meeting,”he was very pleasant to speak with and seemed just like a regular guy,” said Mel Kim. Dan provided a list of trips for the 2022 season that he will be filming on. Mel booked the Sea Star for a 3/4-day out of Oceanside Sea Center with Captain Joe Cacciola.

For personal reasons, Mel could not make the trip. I covered for him. We departed the harbor and went South. The Captain and Crew are some of the most experienced in the sportfishing industry. When we got to our location, anything was possible. There were calico and sand bass being and sheephead being caught. The water was beautiful and gleaming with light. I chose to throw a Tady 4/0 iron in a mint/white hologram color.

My jig stopped. Was it kelp? Then whoomp whoomp, two head shakes yet still no movement. A split second later, two more head shakes and a nice steady pull. We are on! I guessed that it was a big calico. The fish slowly graduated speed as it started pulling drag. The Captain said, That’s no calico.” I was throwing 40-pound leader on 60-pound spectra. After appropriately adjusting the drag, the fish was not going to the kelp reef which was barely visible from the surface. I brought her in quick, too quick. The fish begian running under the boat as it knew it could free itself as it likely had done many times before.

Captain Cacciola looks at me and says, “Give me the rod,” and I immediately gave him my rod. He opened the gear on the spool and let the fish swim deep away from the hull. He locked it back in gear, hands me the rod and the battle continues. At this point my 40-pound blue P-Line has still got the strength to work this fish to the boat. Captain Cacciola tells me it is a nice fish and to take it easy. Some anglers suspect a thresher shark. Then, deep color! The Captain says, “Its a big white seabass!” and grabs the gaff. After seeing the fish deep, I played it a bit longer and we kept it at color for a few minutes. When the fish came up, a perfect gaff shot was placed and the fish is onboard.

When the fish was on board and the gaff was removed, the picture taking began. I opted to leave the jig in the fish for the photos. Dan did some narration on film and so did I. I believe we were both as surprised as each other with this catch. I decided to bring the fish back to the dock whole. Promoting the newly opened Oceanside Sea Center and it’s new aquarium was an opportunity I did not want to miss. Captain Cacciola with crew, myself, and Dr. Bill proudly displayed the fish on the top of the ramp. Ladies, gentlemen and kids of all ages were able to view and touch this magnificent species. After a hundred pictures, we loaded the fish in Doc’s car, drove home, and cleaned it in the back yard. I harvested the otoliths and filleted the beautiful creature to share with as many friends as possible. I am incredibly thankful and appreciative for this harvest.

This goes to show that the right equipment, an experienced captain, and a willing angler can defeat the odds. Minimal crew assistance is acceptable.